As Duke's Superfund Research Center receives another round of funding, environmental engineers discuss how their work helps us learn more about common pollutants. 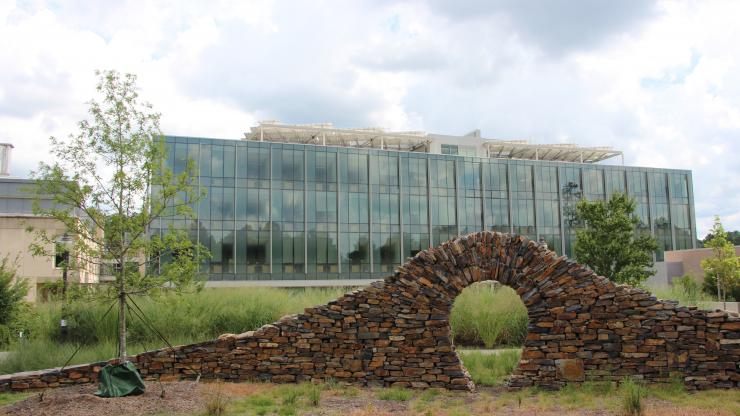 From 1926 to 1992, the waterfront of Portsmouth, Virginia, was home to a wood-treating facility that used various chemicals to preserve and protect lumber from decay and insects. But the chemicals from this facility––and the waste it produced––began to seep into the surrounding land and water, eventually reaching the nearby Elizabeth River. Recognizing the high level of pollution, the Environmental Protection Agency (EPA) listed the area as a Superfund site––a designation given to polluted areas across the US that pose a threat to environmental and human health.

Today, researchers at Duke University are using this site, and others like it, to study how the contaminants from Superfund sites affect human health––and how we may be able to efficiently clean them up.

The Duke Superfund Research Center (SRC) was established in 2000 after the university received a grant to study how early, low-dose exposures to various toxins in Superfund sites affect humans as they develop. Led by Richard Di Giulio of the Nicholas School of the Environment (NSOE) and including faculty from environmental sciences, engineering and the medical school, the Center studies a myriad of common pollutants and issues relating to Superfund--from the role of certain chemicals in reproduction to the neurotoxicity of pesticides.

Now, as the center begins its fourth funding cycle, researchers from Duke’s Department of Civil & Environmental Engineering (CEE) are expanding their interdisciplinary work to study how they can use bioremediation to limit exposure or even remove these pollutants from the environment. 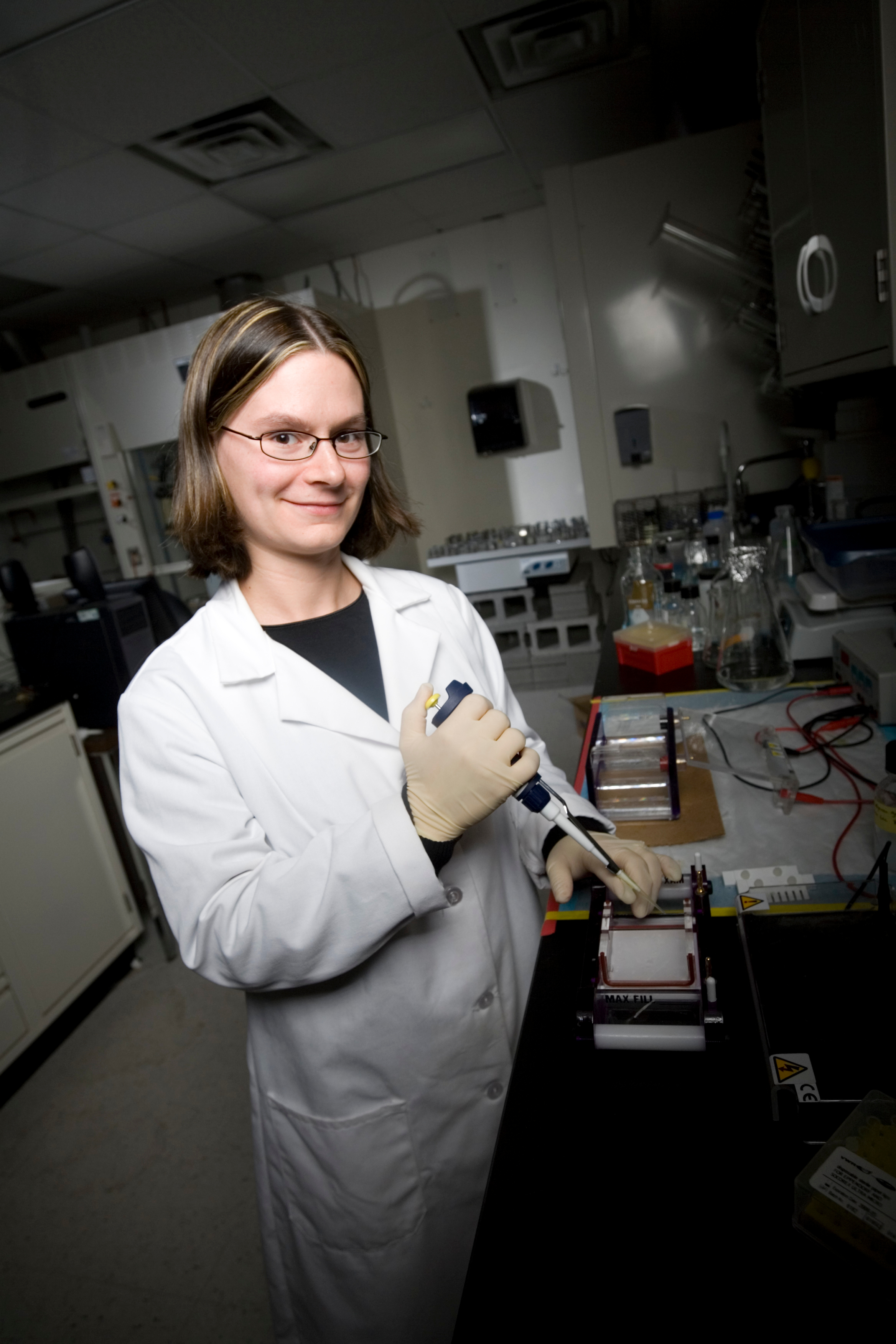 Environmental engineers in Duke’s SRC are focusing their efforts on a common class of Superfund pollutants: polycyclic aromatic hydrocarbons, or PAHs, which have been tied to an increased incidence of certain types of cancer. PAHs are naturally released into the air during forest fires or volcanic eruptions, but they were also introduced into the environment when we used chemicals like creosote, a now-banned chemical, to preserve wood or burn fossil fuels. Lower molecular weight PAHs break down relatively quickly, but heavier PAHs are harder to get rid of, especially in soil.

“PAHs are difficult to remediate because they are hydrophobic--they aren’t dissolved in water and they stick to the sediment at the bottom of rivers and lakes,” says Claudia Gunsch, the Theodore Kennedy Associate Professor in the Department of Civil and Environmental Engineering and lead researcher of the PAH Remediation Project at the SRC. “To solve this issue, we’re examining how we can engineer biofilms to combine both bacteria and fungi to degrade this class of contaminants.”

Fungi can break down certain molecular structures in PAHs using the same molecules they use to degrade wood and leaves on a forest floor. As the fungi break down the PAHs into a simpler form, the PAH by-products become less hydrophobic and bacteria can then access the contaminants, making it easier to clear the PAHs from the environment. But so far, nobody has tried to purposefully engineer fungal-bacterial biofilms to improve PAH degradation efficacy.

But Gunsch, who studied fungi as a graduate student, was approached by one of her students who was interested in fungal bioremediation, and together they devised a method to study how they could alter fungal microbiomes to naturally clear PAHs. To broaden their efforts, Gunsch teamed up with Helen Hsu-Kim, the Mary Milus Yoh and Harold L. Yoh, Jr. Associate Professor of Civil and Environmental Engineering, for the new project.

“In the previous funding cycle we identified strains of fungi in Superfund sites that we could target,” says Gunsch. “Now, my lab is working to understand how to stimulate these native fungi with something that can help their growth and improve how they interact with bacteria.”

Although the primary focus of the project is to study how remediation can clean up sites contaminated from PAHs, Hsu-Kim and her lab are also looking at how cleaning up a contaminant can also change a system and create a worse problem than anticipated.

“If you change the conditions of a system then you also need to understand how those changes will affect the chemistry of the soil,” says Hsu-Kim. “For example, if you’re manipulating the soil to make the bacteria and fungi grow one way, it could affect the mobility of cadmium and zinc that are sometimes co-contaminants in the soil, and we need to understand the overall implications of engineered manipulations that target one class of pollutants so that we don’t accidentally create another problem.” 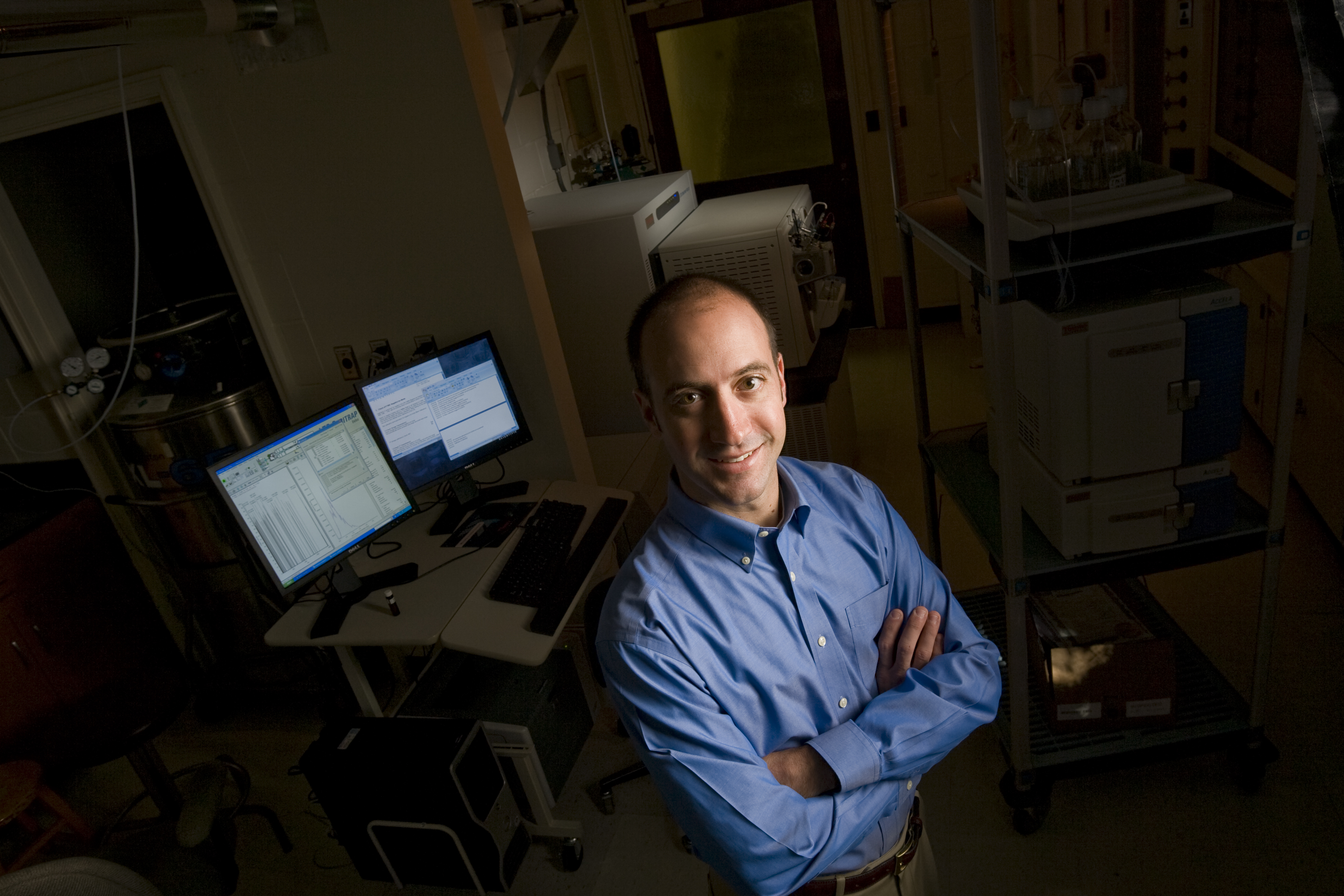 In addition to their work with PAH degradation, Gunsch and Hsu-Kim work with CEE associate professor Lee Ferguson, who runs the Analytical Chemistry Core in the SRC. The Analytical Chemistry Core, which began in 2012 during the third funding cycle, uses mass spectrometry and other instrumental techniques to analyze, identify and quantify the contaminants other groups are studying in environmental systems. Their work can range from identifying byproducts like metabolites from PAHs to measuring the toxicology of metals like arsenic or mercury in Superfund samples.

“The fact that the SRC has been able to create this core to support a number of lines of research is really a feather in Duke’s cap,” says Ferguson. “It gives us a rare asset for doing environmental research.”

The Analytical Chemistry Core provides numerous opportunities for Duke students to engage in the Superfund research. Through the center, students can work with faculty in each of the center’s projects, and they gain skills in experimental design and learn how to prepare samples for analysis using mass spectrometry. According to Ferguson, the SRC also organizes seminars to enhance the formal training students receive in analytical chemistry.

“In the next funding cycle we are expecting to continue our effort to engage SRC students in the center’s activities,” says Ferguson. “Ideally, we’d like to increase opportunities for students with training in analytical chemistry so they can perform some of their own analyses through the core.”

There are more than 1,300 Superfund sites across the US. Duke is one of just 18 Universities that currently host a Superfund research center to study these polluted areas.

Each center focuses on understanding the wide-ranging effects of common Superfund contaminants and other pollutants, but Duke’s unique interdisciplinary focus is of early life, low-dose exposure to toxins and consequences for later in life.

“The SRC is a powerful context for interdisciplinary collaboration that combines microbiology, environmental chemistry and exposure modeling to create solutions to reduce our exposure to hazardous chemicals,” says Mark Wiesner, chair of CEE and a collaborator in Gunsch’s PAH Remediation Project. “This interdisciplinary effort results in a unique capability to provide the science and engineering solutions needed to protect human health and the environment.” 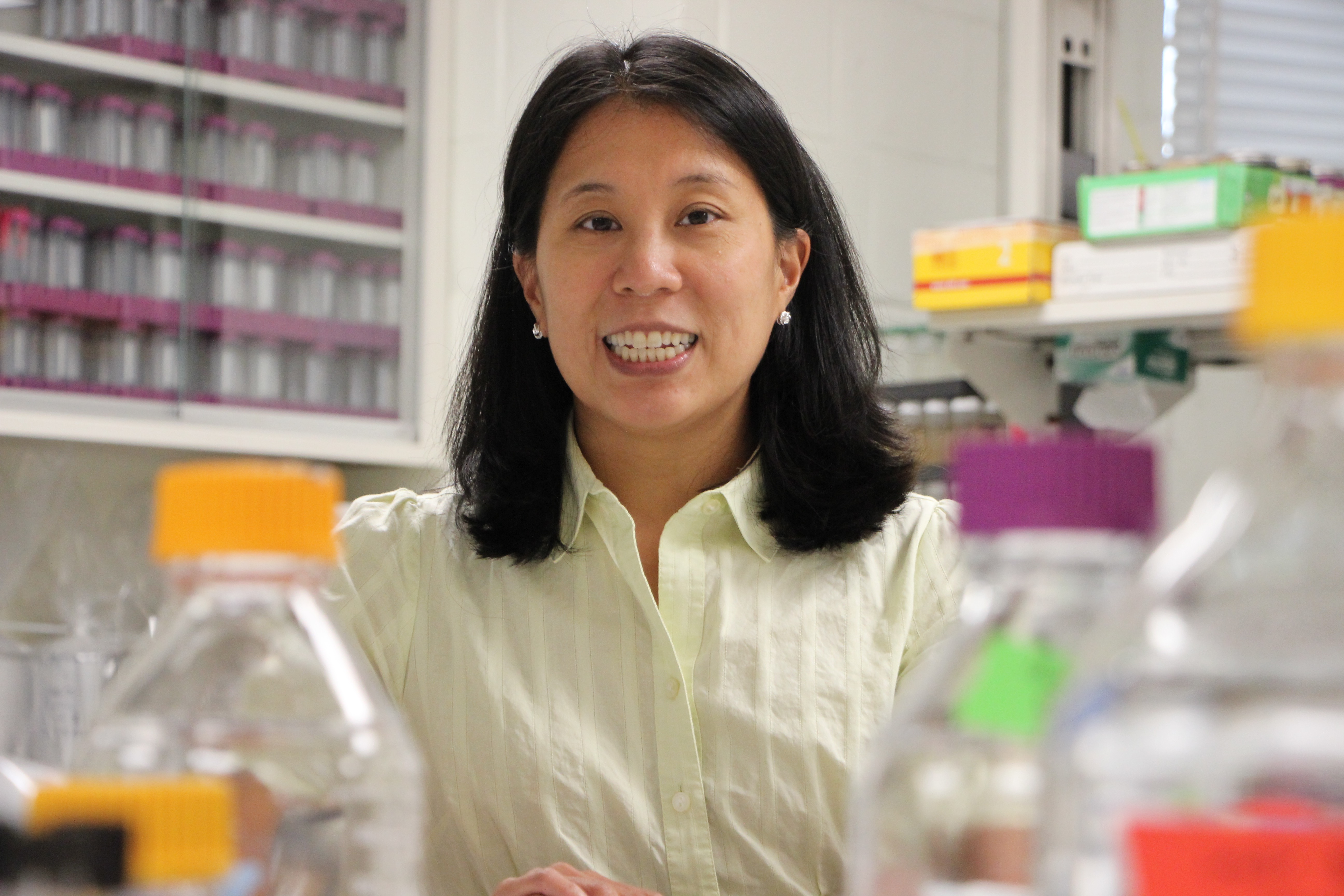 “A principal mandate of the SRC is to develop strategies for reducing exposures to hazardous chemicals,” says Di Giulio. “Claudia Gunsch, Helen Hsu-Kim and Mark Wiesner provide diverse but highly integrated expertise to address this issue in the context of chemical pollutants that are of great concern at Superfund sites, and other contaminants from the other projects.”

Although the SRC’s scope has broadened to include potential ways to clear Superfund contaminants, other health-related projects will continue through the center’s next five-year funding cycle. One project, led by Ed Levin, Theodore Slotkin and Frederic Seidler of Duke University Medical Center (DUMC), will examine how exposure to multiple chemicals affect brain development. Another, led by Di Giulio and David Hinton at NSOE, will also focus on PAHs using samples from the Elizabeth River to track how fish from the site developed a resistance to contaminants––and how that may affect their health later in life. A third project, led by Heather Stapleton, Ferguson and Seth Kullman (from NC State) will to examine how common contaminants, including flame retardants, affect bone and fat development, and can contribute to obesity. A fourth project, led by Joel Meyer (NSOE) and Susan Murphy (DUMC) will examine the potential for several Superfund and other chemicals to act as mitochondrial toxicants and if health consequences persist throughout life and into later generations.

Although the projects for the next round of funding are just beginning, researchers in the center are optimistic about what they will glean from their research over the next five years––and what they can teach others about environmental health.

“We tend to believe that pollution is someone else’s problem when we don’t come into contact with dirty water or contaminated soil,” says Gunsch. “I think that the research from this center shows us that pollution from these Superfund sites, and pollution in general, is everyone’s problem. It doesn’t just affect our environment––it affects our health as well.” 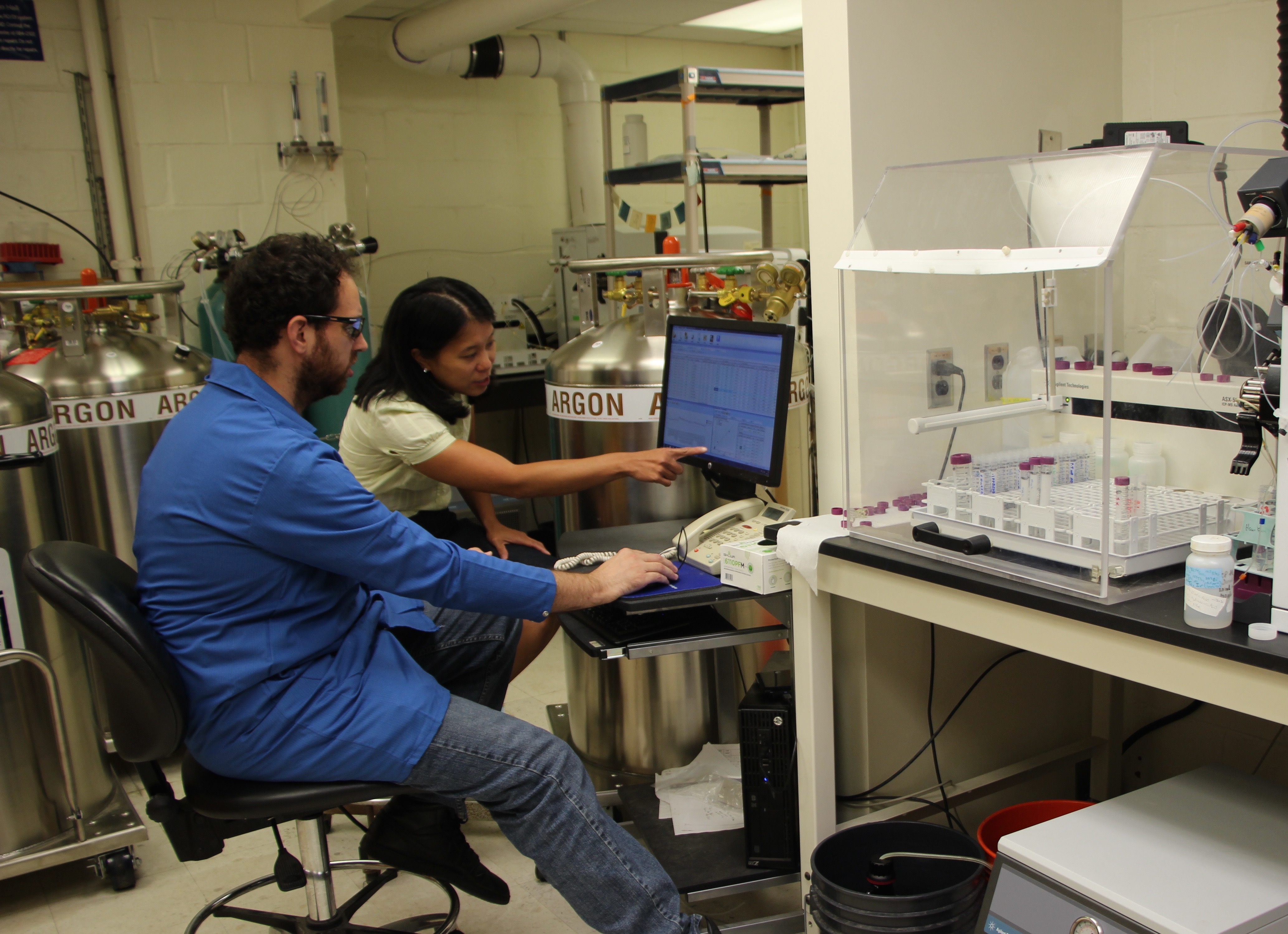