During his time at Pratt, Primas has honed his research to focus on novel methods to directly provide the brain with feedback about the external environment. 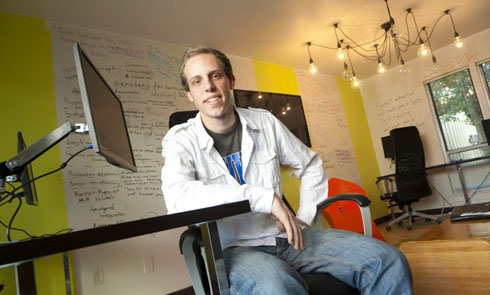 It makes perfect sense that Sidney Primas is double-majoring in biomedical engineering and electrical and computer engineering – his father suffered from the effects of a blood vessel disorder in his brain during a good portion of Primas’s childhood. Since then, Primas has been fascinated with the brain and its intricate network of nerves.

Within two months of arriving on the Duke campus, the current senior was already working in the laboratory of Duke neuroscientist Miguel Nicolelis, who conducts ground-breaking research on teaching the brain to do remarkable things – like moving artificial limbs by thought alone.

During his time at Pratt, Primas has honed his research to focus on novel methods to directly provide the brain with feedback about the external environment. He is testing the ability of computer chips implanted in the brain to do just that. One of the possible long-term applications of his research could be to restore a certain sense of vision to blind people.

“The brain is quite a plastic organ,” Primas said. “The chip could work for those who can’t see like a cochlear implant does for the deaf. We believe the brain can be retrained as it interprets stimuli from the outside.”

While the science involved fascinates him, he is also passionate about taking the research to the next level -- that is, moving technology from laboratory to the bedside. A budding entrepreneur, he serves as president of InCube, a residence of 18 like-minded undergraduates interested in starting their own businesses.

This combined interest in biomedical research and entrepreneurship made Primas an ideal candidate to be a Duke NAE Grand Challenge Stavros Niarchos Foundation Scholar.

The Grand Challenge Scholar program was created nationwide three years ago in response to the National Academy of Engineering (NAE) challenge to the engineering community to help solve the world’s most vexing problems and Duke began its Grand Challenge Scholars Program at the same time. The program supports Pratt undergraduates who not only have a thirst for research, but also a passion for making a difference in the world.

The Stavros Niarchos Foundation (SNF), a global philanthropic organization that is also keenly interested in making a difference, has decided to help fulfill the dreams of Pratt undergraduates by supporting the Grand Challenge Scholar program.

The SNF began its grantmaking activities in 1996 following the death of Stavros Niarchos, a Greek shipping magnate. It is one of the world’s largest international philanthropic organizations, making grants in the areas of arts and culture, education, health and medicine, and social welfare. Since its inception, the foundation has provided total grant commitments of more than $1.3 billion to nonprofit organizations in 102 nations around the world. 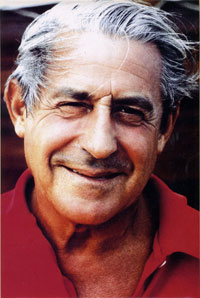 “We like to support undergraduate students because it is a formative time in their lives and careers,” said Andrea Berman, program officer in SNF’s New York offices. “With the emergence of the Grand Challenges and the changing conception of engineering, we believe these types of program can have a major impact in the world.

“The issues we face have an impact on all of us,” she continued. “Our foundation is international in scope, so we want to help solve problems faced by people all over world. That’s why it can be so important to start as early as possible. We’ve supported university programs throughout U.S. and the world – the grant to Pratt was our first specifically focused on engineering. This is a new and exciting opportunity for us.”

Support from the SNF has allowed Pratt to expand its current offering of Grand Challenge-related projects and enhance its undergraduate engineering curriculum. The current funding commitment supports 10 scholars through the 2012-13 academic year.

“I think what is remarkable about the Niarchos gift is how they found that engineering fit with the vision for their foundation to advance social good and culture,” said Tom Katsouleas, Pratt dean. “The Grand Challenges of Engineering show how engineering does just that by making the world more sustainable, more healthful, more secure and more joyful.  This is the first time the Niarchos Foundation has supported an engineering program, and we hope other leading cultural organizations and foundations also see the connection to their missions and follow Niarchos' lead.”

To become a Grand Challenge Scholar at Duke, students must develop a project that encompasses five diverse components, with a major concentration in two: research, an interdisciplinary approach to a problem, entrepreneurship, global outreach and community service. A final thesis will tie together all the elements of the “portfolio.”

Last summer, Primas worked at a start-up company started by a classmate, Urban Acres, whose goal to convert unused land outside the Liberian capitol city of Monrovia into rice and vegetable gardens. The economy of the war-ravaged country had virtually disappeared.

“We were building an economic enterprise from scratch,” Primas said. “While the skills I gained there aren’t those a neural engineer would normally learn, the whole experience helped me in many ways, such as being a problem-solver and working with people with varying skill sets and passions.  The Grand Challenge Scholars program encourages us to face challenges and try to solve them. When we arrived, they were cultivating four hectares of rice – now they’re up to 20.”

Katsouleas points out that “in addition to their engineering education, students will need a well-rounded experience that includes entrepreneurship, global outreach, service to the community and a host of non-engineering skills. In the end, that is what engineering is all about – solving the world’s problems.”

Today, more than a dozen universities have developed their own version of the Grand Scholar Programs. Each proposed new program undergoes rigorous evaluation by a national committee prior to approval, and must include the five components.

“Duke understands that it’s not just about gaining knowledge,” Primas said. “We also need the skills to enable us to use the information we gain here to make a real difference in the world.”