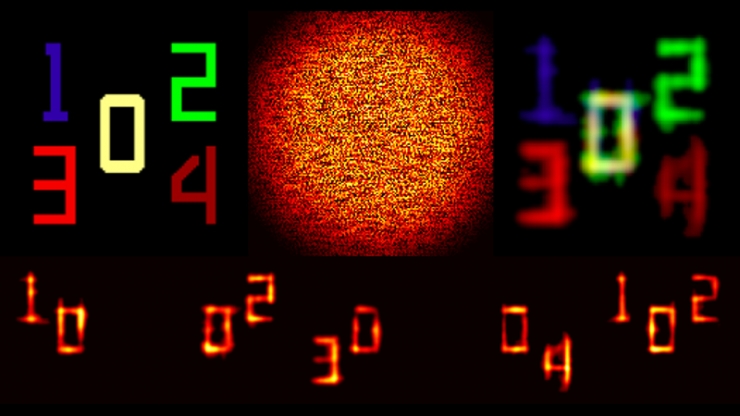 Engineers at Duke University have developed a method for extracting a color image from a single exposure of light scattered through a mostly opaque material. The technique has applications in a wide range of fields from healthcare to astronomy.

The study appeared online on July 9 in the journal Optica.

“Others have been able to reconstruct color images from scattered light, but those methods had to sacrifice spatial resolution or required prior characterization of the scatterer in advance, which frequently isn’t possible,” said Michael Gehm, associate professor of electrical and computer engineering at Duke. “But our approach avoids all those issues.”

When light is scattered as it passes through a translucent material, the emerging pattern of “speckle” looks as random as static on a television screen with no signal. But it isn’t random. Because the light coming from one point of an object travels a path very similar to that of the light coming from an adjacent point, the speckle pattern from each looks very much the same, just shifted slightly.

With enough images, astronomers used to use this “memory effect” phenomenon to create clearer images of the heavens through a turbulent atmosphere, as long as the objects being imaged were sufficiently compact.

While the technique fell out of favor with the development of adaptive optics, which do the same job by using adjustable mirrors to compensate for the scattering, it has recently became popular once again. Because modern cameras can record hundreds of millions of pixels at a time, only a single exposure is needed to make the statistics work.

While this approach can reconstruct a scattered image, it has limitations in the realm of color. The speckle patterns created by different wavelengths are typically impossible to disentangle from one another.

The trick is to use a coded aperture followed by a prism. A coded aperture is basically a filter that allows light to pass through some areas but not others in a specific pattern. After the speckle is “stamped” by the coded aperture, it passes through a prism that causes different frequencies of light to spread out from each other.

This causes the pattern from the coded aperture to shift slightly in relation to the image being captured by the detector. And the amount it shifts is directly related to the color of light passing through.

“This shift is small compared to the overall size of what’s being imaged, and because our detector is not sensitive to color, it creates a messy combination,” said Li. “But the shift is enough to give our algorithm a toehold to tease the individual speckle patterns apart from each color, and from that we can figure out what the object looks like for each color.”

The researchers show that, by focusing on five spectral channels corresponding to violet, green and three shades of red, the technique can reconstruct a letter “H” full of nuanced pinks, yellows and blues. Outside of this difficult proof-of-principle, the researchers believe their approach could find applications in fields such as astronomy and healthcare.

In astronomy, the color content of the light coming from astronomical phenomena contains valuable information about its chemical composition, and speckle is often created as light is distorted by the atmosphere. Similarly in healthcare, color can tell researchers something about the molecular composition of what’s being imaged, or it can be used to identify biomolecules that have been tagged with fluorescent markers.

“There are a lot of applications where people really want to know how much energy there is in specific spectral bands emitted from objects located behind opaque occlusions,” said Greenberg. “We’ve shown that this approach can accomplish this goal across the visible spectrum.  Knowing the aperture pattern and how much it shifts as a function of wavelength provides the key we need to disentangle the messy sum into separate channels.”

This research was supported by the Defense Advanced Research Projects Agency (HR0011-16-C-0027).