Doing laundry with rainwater while conducting research in the backyard green house.

Checking up on the growth of the green roof as well as how much rainwater has collected in the six 400-gallon tanks in the basement.

Observing wattage used by each room’s controlled lighting, while the hum of a self-mowing lawnmower makes its way by an open window near the lab adjacent to the kitchen.

These are components that make up a normal day in the life of a student residing in the Duke University Smart Home.

Nine years ago, a Pratt School of Engineering senior project caught the interest of some of the most influential in the department, as well as Home Depot and then took flight. Today, Mark Younger’s project has not only become a significant part of Durham and Duke University, but also a living laboratory for students and professors alike.

“I really like it. I think it’s great,” said Andrew Jones, rising senior civil and environmental engineering major. “I think that part of the impact that it has on student research is that we are able to figure out something in theory and then check it practically, which speeds up research immensely,” 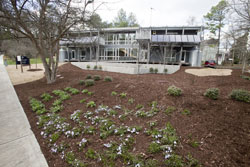 Jones is currently working on a rainfall model and cistern project with the Pratt Fellows Program both in and out of the Duke Smart Home. Past research of professors and students proves that given how much rain has fallen and evaporated, you can figure out how much water is left in the soil for plants. Using the information gathered from the Smart Home research as well as the 400-gallon rain barrels, Jones can conduct helpful research that could one day transcend the Smart Home and play a significant role in watering plants, lawns, and green living in general.

“With a rain barrel you don’t have an infinite amount of water. When you irrigate and when you don’t irrigate is very important in making sure you don’t get caught in a drought. So basically we are looking at how to use a cistern to water your lawn with newer models that we’ve come up with,” said Jones.

The ten-person student hall for green living and learning boasts of many features sure to make a difference in research for all those involved. The split-level home has solar panels lining the front outside as well as on the roof, which is also green with life spouting from it. With 6,000 square feet of live-in research lab operated by Pratt Engineering School, there are various projects researched and brought to fruition for the use of Duke University students and staff members. Developments such as the Duke Transit tracking (DuTrack) and the Perkinsense library project are just two recent examples.

“Someone’s now working on a program that could possibly figure out how much water they’re using at each faucet, such as dishwashers and things. Then they can figure out where the water level is in the tanks and where we are using most of the water and how we are using it,” Jones said.

With three rain gardens, weather monitoring connections, and perks like fresh thyme growing at your feet in the back yard, there is growth and research at every turn. The research at the Smart Home resolves to move as many projects from the idea stage to the installation stage as often as possible. This shows both progress for Duke University, Home Depot, and the general community as each student contributes to the growing success of the research dormitory.

“Being an undergraduate student who doesn’t have to apply for a $10 million grant to conduct a study or to hire the scientists helps is great. Also my professor can work on other things knowing that I can handle this. Having those resources encourages students to feel that they can go ahead and do a lot of things,” added Jones when reflecting on how crucial the research dorm has become to ecosystem education.

As with most research and progress at Duke, Jones and others working on green projects are interested in passing along their knowledge. Such intelligence could easily grow past their labs on campus and travel far and wide.

“We are also working on applications that allow other cities to put in their own average rainfall record and average home roof size information. This can be used to determine how much money or water a city could save, and that can be used to better prepare for possible droughts,” said Jones.

The Duke Smart Home is also accredited for being the first LEED (Leadership in Energy Environmental Design) Platinum building on Duke University’s campus.  Such an honor is considered to be the utmost accomplishment in green construction.