Melanoma is the fifth most common cancer type in the United States, and it's also the deadliest form of skin cancer, causing more than 75 percent of skin-cancer deaths. If caught early enough, though, it is almost always curable. Now, a camera capable of taking snapshots of the entire human body and rendering high-resolution images of a patient’s skin may help doctors spot cancer early and save lives. 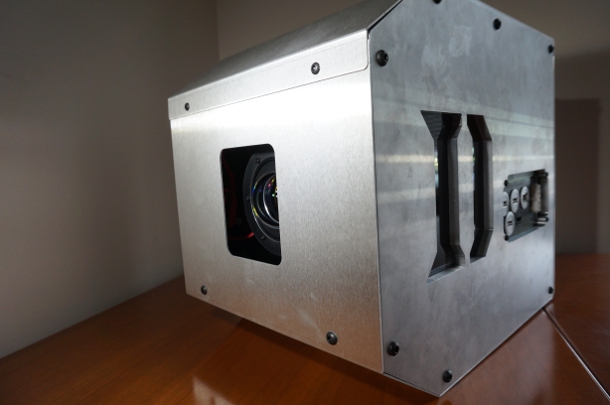 Developed by engineers at Duke University, the “gigapixel whole-body photographic camera” is essentially three dozen cameras in one, allowing the researchers to image the entire body down to a freckle. The research will be presented at The Optical Society's (OSA) 98th Annual Meeting, Frontiers in Optics, being held Oct. 19-23 in Tucson, Arizona.

“The camera is designed to find lesions potentially indicating skin cancers on patients at an earlier stage than current skin examination techniques,” said Daniel Marks, associate research professor of electrical and computer engineering and one of the co-authors on the paper. “Normally a dermatologist examines either a small region of the skin at high resolution or a large region at low resolution, but a gigapixel image doesn’t require a compromise between the two.”

Although whole-body photography has already been used to identify melanomas and exclude non-dangerous “stable” lesions, the approach is typically limited by the resolution of the cameras used. A commercial camera with a wide-angle lens can easily capture an image of a person’s entire body, but it lacks the resolution needed for a dermatologist to zoom in on one tiny spot.

Because of this limitation, dermatologists typically examine suspicious lesions with digital dermoscopy—a technique to evaluate the colors and microstructures of suspicious skins not visible to the naked eyes. The need for two types of images drives up costs and limits possibilities for telemedicine.

Enter the gigapixel camera, developed by David Brady, the Michael J. Fitzpatrick Professor of Electrical and Computer Engineering at Duke University, along with scientists at the University of Arizona, the University of California-San Diego and Distant Focus Corp.

The original version of the gigapixel camera features dozens of independent microcameras arranged in a “dome” behind a spherical lens. The exposure time and focus for each microcamera can be adjusted independently, and a computer can do a preliminary examination of the images to determine if any areas require future attention by the specialists. After the data have been crunched, the result is a photo of unprecedented resolution.

To suit the needs for scanning skin, Marks moved the microcameras of the original gigapixel camera outward from the center to focus on closer objects and widen its field of view. “It took a new arrangement of the optics, but it was a pretty simple process and the results have been good,” said Marks.

Marks points out that though the resolution of the gigapixel camera is not as high as the best dermascope, it allows for a larger imaging area and could be used for telemedicine, which could make the routine screening available to a larger number of people, even in remote locations.

The next step for Marks is a clinical trial in a VA hospital. His team has designed a version of the camera with 63 microcameras arranged specifically for imaging close-range objects. The unit also has lighting to create a standard illumination of patients’ skin and can be easily tucked away in a closet until needed.

If the trial proves successful, Marks hopes to receive sustained funding for the project. He envisions the cameras not only spotting potential lesions, but eventually being able to help clinicians know what to look for.

“Nobody has ever had access to comprehensive images and medical records like this before,” said Marks. “If we can build a large enough database and monitor patients over time, we might be able to go back and find biological markers of different diseases that medicine is currently unaware of.”

Lyndsay Meyer from the Optical Society was a major contributor to this piece.