Guillermo Sapiro, the Edmund T. Pratt Jr. School Professor of Electrical and Computer Engineering at Duke University, has been awarded two new grants totaling about $2.5 million over the next five years. Sapiro is a co-investigator on both grants, each exploring the detailed inner workings of the human brain. 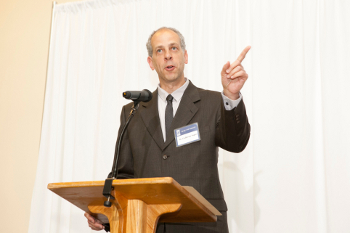 The first award is part of the National Institutes of Health (NIH) Director’s Transformative Research Award program, which supports innovative and inherently high-risk, high-reward projects that have the potential to create or overturn fundamental paradigms. Titled “Synaptomes of Mouse and Man,” the project brings together researchers from eight institutions for five years to begin piecing together a complete picture of synapses in mammalian brains.

Led by the Allen Institute (Stephen Smith, PI), the open-source project will catalogue the many different ways individual synapses communicate with each other. The researchers will create new tools and methods to analyze and model the wide varieties of synapses in mammalian brains. Sapiro’s role will focus on image processing and machine vision and learning technologies. His work in the project will be supported by about $1 million over the next five years.

The second award also comes from the NIH. As part of the first wave of funding for the Brain Research through Advancing Innovative Neurotechnologies (BRAIN) initiative, Sapiro will help develop the next generation of Magnetic Resonance Imaging (MRI) technology that can directly detect neuroelectric activities in the human brain with a high spatial and temporal resolution. Led by Duke professor Allen Song, who holds appointments in radiology, neurobiology, biomedical engineering, and psychiatry and behavioral sciences, the three-year grant will be supported by nearly $1.5 million.