Piervincenzi is CEO of the U.S. Pharmacopeial Convention 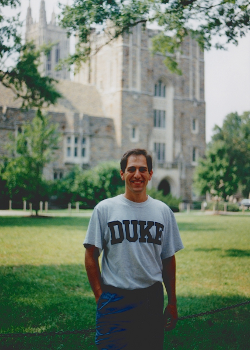 If a movie were made about Ron Piervincenzi’s career path, it might start with him standing in a line of future computer scientists. And before the credits rolled, the story would see him setting the standards for almost every medication sold in the United States.

Its title might be A Series of Fortunate Events.

The story begins in that long line of future computer scientists, where Piervincenzi stood waiting to sign up for undergraduate classes in 1989 before his first year at Hofstra University. “I was actually going to enroll in computer science, but at the very last minute, I switched over to engineering,” recalls Piervincenzi. “The computer science line just didn’t feel right.”

My experience at Duke was a very complete one. I didn’t feel like I was just a student. I also had roles as a teacher, a research scientist and an entrepreneur.

The snap decision turned out to be a good one, as Piervincenzi excelled at Hofstra while often visiting the Naval Research Laboratory in Washington DC, thanks to Hofstra Professor Sina Rabbany, Ph.D. It was there that Piervincenzi got a taste for getting his hands dirty with, as he calls it, “real bench research… real science… the good stuff.”

After having spent so much time in the laboratory, Piervincenzi wasn’t interested in taking prerequisite courses while pursuing a doctorate degree.  So when Monty Reichert, the Alan L. Kaganov Professor of Biomedical Engineering at Duke, told him that Duke was much more focused on practical work rather than sitting in class, Piervincenzi headed for Durham.

While at Duke, Piervincenzi helped newly hired faculty member Ashutosh Chilkoti build his laboratory from scratch, stretching dollars as far as he could at used laboratory equipment shops. He also spent a lot of time getting frustrated in the said laboratory. But when challenging bench work closes a beaker, it often ignites a Bunsen burner.

“I wanted to build something pretty dramatic, so I was trying to build molecular switches in protein molecules for targeted drug delivery, but without much success,” says Piervincenzi. “After one particularly frustrating day in the laboratory, I took a walk to release some steam and check my mail over at Big Red [a/k/a Hudson Hall]. As usual, I didn’t have any, but I did notice a hallway poster for a consulting internship program at McKinsey & Company. I’d never heard of them, but after such a bad day in the lab, it was appealing.”

Unfortunately, after applying to the internship program, Piervincenzi got a call saying that it had been filled. Fortunately, a few days after that, they offered him an interview for a full-time position instead.

Piervincenzi spent nearly 13 years at McKinsey working mostly in the pharmaceutical and biotechnology industry, doing healthcare work, and applying many of the skills and knowledge he’d acquired at Duke. For some of his time at McKinsey, he specialized in areas like drug safety, medical communications, and interactions between physicians and the drug industry. After a subsequent short stint at Biogen Idec working on personalized medicine, Piervincenzi got another offer he couldn’t refuse—from the U.S. Pharmacopeial Convention (USP) in early 2014.

“It was a little awkward having been at Biogen Idec for less than a year, but they understood what a unique organization USP is and were very gracious about it,” says Piervincenzi.

First formed in 1820, the non-profit produces quality standards for drugs, foods, and dietary supplements.  In addition, it produces and sells “reference standards” (chemicals) that the drug industry may use as benchmarks for prescriptions, over-the-counter medications and more. With nearly 1,000 full-time employees split between Maryland, India, China, Brazil, Africa and Europe, the complex organization is growing tremendously, and learning how to operate in a continually expanding world.

When a drug produced by an “innovator” pharma/biotech company comes off patent, there can suddenly be tens of generic manufacturers in many countries making and selling it all over the world. And with hundreds of drugs coming off patent, the system is becoming incredibly complex. Helping this global industry create the infrastructure to verify drugs’ chemical compositions is just one of the growing roles USP is taking on.

For developing nations, this situation becomes even worse.

“More than 50 percent of the drugs reaching patients in some developing nations are substandard or even counterfeit,” says Piervincenzi. “It’s a very serious problem. Just imagine buying acetaminophen with a 50 percent chance that what you’re buying isn’t actually acetaminophen. It’s hard for many of us to imagine.”

Piervincenzi was attracted to the role at USP because of the business, scientific and non-profit roles it plays. It may seem like a lot to handle, but Piervincenzi says he is well prepared for the challenge, due in no small part to his time at Duke.

“My experience at Duke was a very complete one,” says Piervincenzi. “I didn’t feel like I was just a student. I also had roles as a teacher, a research scientist and an entrepreneur. I think that was because of how BME models their PhD program. It’s a very applied and practically focused path, and it was a wonderful fit for me.