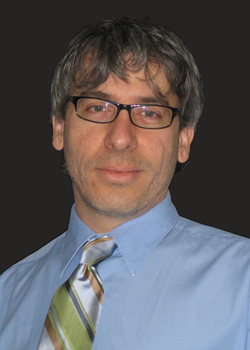 Robert Greenberg is president and CEO of Second Sight, a company that creates prosthetic devices that can bring sight to people with blindness. The company’s retinal implant Argus II, also called a bionic eye, translates visual images as electrical stimulation to the wearer’s retina, in order to transmit that information along the optic nerve to the brain. The prosthesis is currently in use in Europe and was approved for use in the United States by the FDA in 2013 for patients with retinitis pigmentosa. Greenberg says applying electrical engineering to medical questions has been his dream since he completed his double major in electrical and biomedical engineering at Duke.

The surgeon put a wire into a totally blind patient’s eye and another fellow turned up the current on a block of electronics, and the patient said, ‘I see a spot of light.’ Then he put a second wire in and the patient said, 'OK, now I see two spots of light.’ At that moment I was hooked. I thought, from here this is an engineering problem; I could do this.

How did you come to work with electronic prostheses?

By the time I finished at Duke, I knew I wanted to work with electronics and medicine. I went on to start an MD/PhD at Johns Hopkins, and as a first-year medical student I met Eugene de Juan, MD,a former Duke professor—who had this idea that he could electrically stimulate the eyes of blind patients. This idea seemed like the perfect marriage that I was looking for. The day after I met him he asked me to join him in the OR to see one of his experiments. That’s a dream for a first-year student—not just to go to the OR, but to go to the OR to see what was likely to be a historic experiment. And it was really fantastic: He put a wire into a totally blind patient’s eye and another fellow turned up the current on a block of electronics, and the patient said, “I see a spot of light.” Then he put a second wire in and the patient said, “OK, now I see two spots of light.” At that moment I was hooked. I thought from here, this is an engineering problem; I could do this.

After my MD/PhD program I took an unusual step—I went to work for the FDA as a medical officer, reviewing neurosurgical medical device applications. Less than a year after I joined the FDA I met Alfred Mann, who is a biomedical device entrepreneur in LA, and he convinced me to come to California and join his non-profit research foundation, which funds advanced medical device development. I met with one of his companies that makes cochlear implants, and  one of their investors asked if that technology could work for blindness. The very next day we started Second Sight, and Al Mann asked me to run it.

Did your experiences at Duke help prepare you for such an unusual career path?

My time at Duke was an excellent launch pad. One experience in particular that I think was influential was designing the Telekey system for Duke’s dormitories. Because I was president of the engineering student government, I was asked to sit on a university buildings and safety committee, and we were looking at a telephone-based system that would allow students to use a phone to unlock the dormitory doors. I had the idea that I could design a system that would be able to listen to the touch tone of the phones, so that we could install a Telekey system without rewiring the building (the other expensive alternative we were considering). Over Christmas break one year I designed it. We ended up installing it in every dorm on campus. I began marketing it when I was in med school and it was installed at several other universities. At that point I realized I needed to make a choice: I needed to either stay in med school or continue selling security systems. I decided to stay.

It’s a good thing you decided to stay in med school.

Definitely. But that experience at Duke was a soup-to-nuts experience—not only doing the design work but also figuring out the administrative part of it, the purchasing part of it, marketing it to other schools; I got a patent for it, I was installing them myself—I was getting a pretty well-rounded early experience.

We’re beginning to talk about the next-generation device that will move the implant from the eye to the back of the brain. That would allow us to access more patients with different kinds of blindness in addition to retinitis pigmentosa. There’s really no treatment for these patients other than this implant, so it’s really exciting. We got one thousand phone calls from prospective patients when the FDA approved our implants. The idea that we could reach all blind patients – perhaps 8 million people is intoxicating.

How does it feel to be able to change someone’s life so dramatically?

It’s the best. It’s what keeps us going. It’s life-changing for these people—our patients talk about feeling more confident to walk around outside. They feel more connected to other people, because they can see when a person has walked away or turned away—these are social cues that most of us take for granted. Even just the experience of seeing color, that’s been an emotional experience for a lot of people. We’ve noticed that there’s something about the color blue in particular that patients have an emotional reaction to, especially if they haven’t seen it in a long time. Perhaps that is connected to the color of the sky or water.

It’s been a lot of hard work, more than 25 years of hard work to get to this point. But just meeting one patient whose life is transformed . . . that makes it all more than worthwhile.