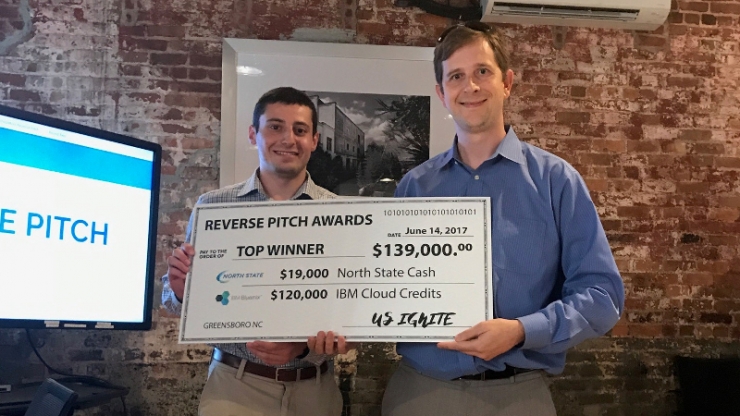 A team of Duke University engineers is working to make shared virtual reality experiences more useful to collaborators working on joint projects. Their vision is vivid enough to have won the 2017 IGNITE NC Reverse Pitch Competition this month, earning them $19,000 cash and $120,000 in IBM Cloud Credits to develop their product.

The competition is a subsidiary of US IGNITE, a national nonprofit that is seeding next-generation internet-dependent innovation across the country. In the reverse pitch competition, entrepreneurs are challenged to come up with solutions to specific problem statements.

Regis Kopper, assistant research professor of mechanical engineering and materials science at Duke, had an idea that fit within the Regional Sharing category. He recruited electrical and computer engineering and computer science students Mitchell Berger, Isaac Andersen and Rayan Tofique to help him pursue it.

These features include the ability to draw annotations that everyone can see on the virtual reality video using a handheld pointing device. The app also shows users where others linked to the system are looking, making it easy for everyone to be looking at the same thing. And so everyone can provide input, the video restarts at the touch of a button and displays all of the previously drawn annotations.

The idea landed the team one of the 10 finalist spots in the spring. For the next several months, the group traveled to Greensboro to get help refining their pitch while working on coding the app back at Duke. The final competition took place in late June, where the team presented a short video demo from their prototype during a six-minute pitch.

The panel of judges consisting of local CIOs and representatives of IBM was clearly impressed, awarding Kopper and his students one of the two grand prizes. The group will use the winnings to refine their prototype by perfecting the user interface, building networking infrastructure to make the program available to offsite users, and cultivating a library of videos.

“We want to grow a curated database of videos that are annotated by experts for educational experiences,” said Kopper. “You could imagine getting to experience firsthand videos of hard-to-reach places like archaeological dig sites or restricted access places like operating rooms. And with the collaborative features included, it would be much easier to deliver messages than with just video and audio alone.”