REU at 25: A Positive Impact on Students—and Duke Engineering

Through the REU program, hundreds of students have gotten hands-on experience in a research lab—and those experiences didn’t end in the classroom. 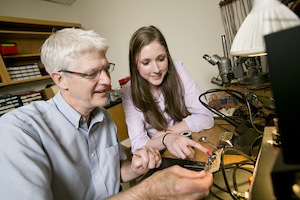 For 25 years, Duke Engineering has welcomed undergraduates like Paige Maxon to campus each summer as part of the Research Experiences for Undergraduates (REU) Program.

Through the REU program, Maxon and hundreds of students before her got hands-on experience in a research lab—and those experiences didn’t end in the classroom.

“It opened a lot of doors,” said Maxon, a junior biomedical engineering major at North Carolina State University. “Duke offered a lot of seminars about different academic topics that opened my eyes to things I didn't think about before.”

The REU program is available to rising sophomores, juniors and seniors who are United States citizens or permanent residents. Each student is matched with a project and mentored by faculty and graduate students.

“Our REU program helps students learn a wide set of skills that they need to go on for higher engineering education,” said Martha Absher, Associate Dean of Education and Outreach at Duke Engineering.

Beyond the lab, students also partake in seminars to help them learn skills such as public speaking and how to apply to graduate school. They also get a glimpse into the wide variety of options available to engineering graduate students.

Absher has led Duke Engineering’s REU involvement for 25 years. In the late 1980s, Duke became the first National Science Foundation engineering research center focused on biomedical research. Part of that designation required an outreach component, and the REU program was started at Duke in 1989.

Since then, the program has grown and expanded far beyond its origins. Absher created the REU for Increasing Diversity in 2002 to further promote diversity in engineering and help more students from underrepresented populations gain a foothold in the field.

The program is open to all eligible students, with an emphasis on diversity, and it crosses all fields of engineering. The NSF has used Absher’s REU program at Duke Engineering as a model for how REU programs should be run.

In 2012, the REU program Absher directs was expanded to include additional programs in each department of Duke Engineering as well as in the Triangle MRSEC (Materials Research and Science Engineering Center), and in 2013, the Duke Wireless Intelligent Sensor Networks (WISeNet) Integrative Graduate Education and Research Training (IGERT) program. The Center for the Environmental Implications of NanoTechnology (CEINT) at Duke also offers an REU program.

A Commitment to Diversity

Absher takes great pride in the diversity that the REU programs promote.

“I want our programs to be inclusive of everybody. This includes underrepresented minorities, defined by the National Science Foundation as African American, Native American, Hispanic, Pacific Islander and Native Alaskan. I've had students from all these groups represented in my program over the years.”

Absher also includes other groups defined by NSF as underrepresented in science and engineering, such as women and persons with disabilities.

Since the program began in 1989, Duke Engineering has hosted 341 undergraduates as part of the REU program. Many of those students have gone on to distinguished academic careers, and they credit the REU program with putting them on the right track.

“Dr. Wolf exposed me to the diversity of BME research, and I was hooked,” Porter said. Porter went on to get a PhD in bioengineering at the University of Washington and is now an associate professor at Boston University. He visited Duke in 2013 as a faculty guest lecturer to present a BME seminar on ultrasound.

For Daniel Lundberg, a deaf student from Gallaudet University who participated in the REU program in 2001 with Fan Yuan, professor of Biomedical Engineering, the experience helped him with research skills. But, more than that, he learned how to better use American Sign Language to work with interpreters and communicate with hearing audiences, which was essential to his future professional development.

“It helped me connect with the audience better. After that experience, I was a changed man when it came to presentations—one of the best rather than one of the worst,” he wrote in an email. Lundberg is now an associate professor of chemistry at Gallaudet University, a higher education institution for deaf and hard of hearing students. 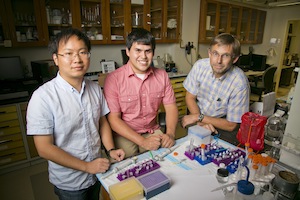 The REU program doesn’t just enhance the lives of the undergraduates who come for the summer. Duke Engineering faculty like Patrick Wolf and Stefan Zauscher, Sternberg Family Professor of Mechanical Engineering and Materials Science, have participated in the program for years and find it offers them new experiences, like working with students with disabilities.

In addition, the REU program can help pave the way for NSF grants for faculty. All NSF funding requires an education and outreach component, and the REU program is a perfect opportunity to demonstrate a commitment to outreach and diversity.

For Duke Engineering, the program helps expose students from all around the country—and institutions big and small—to the possibilities that the graduate program at Duke can offer.

Absher knows that the REU program is a great benefit for faculty and the school. In the end, it’s about helping the next generation of engineering professionals find their way.

“This can be a life-changing experience for students,” she said.

More About REU at Duke

Distinguished Alums: See what several REU alums did during their summers at Duke—and what they're up to now.