Duke engineers have demonstrated that rigidly constraining dielectric materials can greatly improve their performance and potentially lengthen their lifespans.

DURHAM, N.C. – Just as a corset improves the appearance of its wearer by keeping everything tightly together, rigidly constraining insulating materials in electrical components can increase their energy density and decrease their rates of failure.

Many electrical components, like wiring, are typically surrounded by a material that keeps the electricity from passing to its surroundings. These insulating materials are known as dielectrics, and can take many forms, with the most common being “soft” materials known as polymers. However, since these dielectrics are constantly being submitted to electrical voltage, they tend to break down.

Duke University engineers have demonstrated that rigidly constraining dielectric materials can greatly improve their performance and potentially lengthen their lifespans. This insight follows their discovery earlier this year of the exact mechanism that causes soft dielectric materials to break down in the presence of electricity. 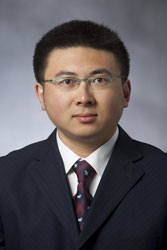 “We found that increasing voltage can cause polymers to physically crease and even crater at the microscopic level, eventually causing them to break down,” said Xuanhe Zhao, assistant professor of mechanical engineering and materials science at Duke’s Pratt School of Engineering. “So we thought if we wrapped the polymer tightly, that would prevent this creasing from occurring. Experiments proved this hypothesis to be true.”

The results of the Duke study were published online in the journal Applied Physical Letters.

In their experiments, the Duke researchers constrained three different soft polymer dielectrics with epoxy. Epoxy is a type of polymer created by the reaction of a resin with a hardening agent. When mixed, a hard and inflexible coating is formed.

“The rigid epoxy acts as a mechanical constraint,” Zhao said. “Since it adheres tightly to the dielectric, it prevents the deformation that would normally occur. We found that this constraint can greatly enhance the ability of the component to carry greater voltage, increasing its energy density by more than ten times.”

Zhao said that scientists have been working for years to develop new dielectrics based on new types of soft materials or polymers to increase energy density and solve the problem of breakdown.

“We believe that there can be a drastically different approach to achieving these higher energy-dense soft dielectrics,” Zhao said. “Our experiments show that the energy density of these soft materials can be significantly enhanced by proper mechanical constraints of the dielectrics, and not necessarily a new type of dielectric material.”

The team is currently testing newer methods for achieving even tighter constraints to increase the energy density of polymer dielectrics.

The research was supported by startup funds from Pratt and the Triangle Materials Research Science and Engineering Center, which is funded by the National Science Foundation.