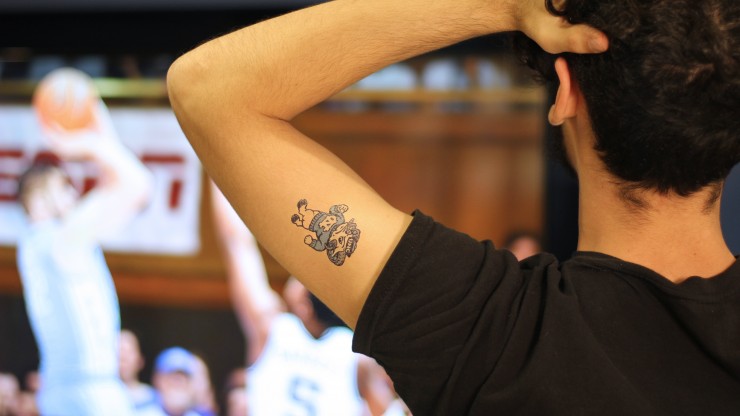 They are the faded souvenirs of your questionable judgement, unbridled revelry, and/or dissolved relationships. But if you thought you’d be stuck with your bad tattoos forever—or face the pain and potential scarring of laser removal—take heart: A new robot-guided laser removal system being developed by the Brain Tool Laboratory at Duke aims to make the process quick and painless.

The Brain Tool Laboratory, which is housed within Duke Robotics, seems an unlikely birthplace for a tattoo removal system. Duke neurosurgeon and mechanical engineering and materials science (MEMS) faculty member Patrick Codd directs the lab, which primarily develops robot-guided laser surgical systems. Using preoperative MRIs as roadmaps, the systems can precisely scalpel away targeted tissue—or even vaporize it, if the chosen laser is powerful enough.  But Weston Ross, who earned his PhD in MEMS at Duke and who is now a postdoctoral scholar in the university’s Department of Neurosurgery, said that targeting dermatological ailments, such as tattoo removal, has expanded how the lab’s laser technology can be applied.

“With our robotic scalpel system, we can more precisely locate and treat the tattoos, without overshooting and damaging surrounding tissue, which happens too much with current handheld laser systems,” said Ross.

With advanced imaging techniques, such as stereo vision, the system can precisely locate the tattoo’s boundaries. A robot could then guide a laser along the trail of ink, bombarding it with light that disintegrates each ink molecule to be carried away in the bloodstream and disposed of as waste.

"Using a robot, we can deploy a very tiny laser and trace precisely where the tattoo is—there’s no overlapping, no extra damage and you get a uniform removal.”

Though the Brain Tool Laboratory’s system sounds similar to current laser removal techniques, it actually has a couple of huge advantages, according to Ross. For one thing, it is more targeted, which makes it less painful. “Currently, a dermatologist uses a handheld laser, moving it across the surface of the skin,” explained Ross. “That causes a lot of damage and pain because of the overlapping that happens when the laser goes back and forth over the image. Using a robot, we can deploy a very tiny laser and trace precisely where the tattoo is—there’s no overlapping, no extra damage and you get a uniform removal.”

Moreover, the system allows the doctor to choose the best laser to effectively disintegrate the type of ink that was used to create the tattoo.

“With any given tattoo, we don’t know what type of ink it is,” said Ross. “There’s no FDA oversight. A lot of the work is done in professional studios, but it’s also done in the backs of vans.” The lack of standardization means that though two black inks might appear identical to the human eye, Ink A might absorb purple light more readily than Ink B, while Ink B might absorb red light better.

“We want to choose the most appropriate laser for the job, to reduce pain and improve the patient experience,” said Ross.

Right now, removing a tattoo usually takes between six and ten sessions, allowing time between sessions for your skin to heal. But the new system is expected to be much more efficient, requiring only a couple sessions, with the tattoo fading into oblivion over several months. The process itself—the “zap”—might take only tens of seconds.

The Brain Tool Laboratory recently won the American Society for Dermatologic Surgery Jumpstart Research Seed Grant to develop the prototype system, which Ross expects to be finished by mid-2020. The interdisciplinary collaboration between engineering and the medical school will leverage the expertise of Patrick Codd (Neurosurgery/MEMS), Junjie Yao (Biomedical Engineering), and Jigar Patel (Dermatology), in addition to Ross.

To scale up beyond the prototype might take four or five years, said Ross, but he envisions tattoo removal kiosks at the drugstore alongside blood pressure machines in the not-too-distant future.

And, added Ross, tattoo removal, while worthy, isn’t the end game for the lab’s new technology. “It would be super cool if the research we put together could target indications that are more detrimental—like skin cancers,” he said.

More about the Brain Tool Laboratory