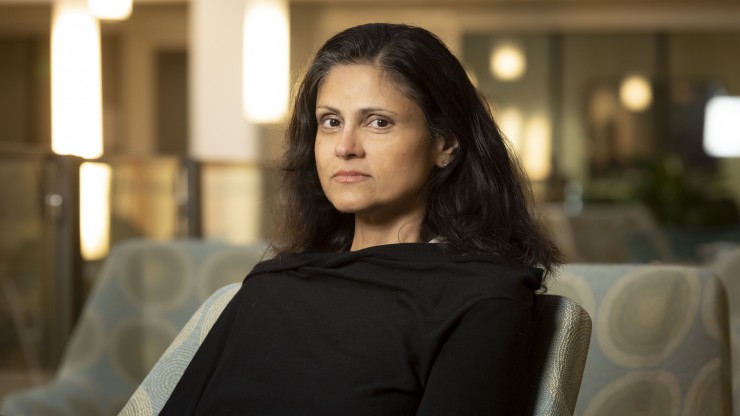 This is a condensed version of the full announcement released from the Optical Society. Click here to read the full press release.

Nimmi Ramanujam received the Optical Society's 2020 Michael S. Feld Biophotonics Award, in recognition for her work to improve diagnostics and therapeutics to address global disparities in cervical and breast cancer management and mortality.

“Nimmi Ramanujam, a notable leader in biophotonics research, is known for addressing some of the greatest global challenges with disparities in cancer treatment,” says 2020 OSA President Stephen D. Fantone, founder and president of the Optikos Corporation. “Ramanujam’s selection as the 2020 Michael S. Feld Biophotonics Award recipient is a true testament to her dedication to the field.”

Her research on women’s cancers has centered on translational and laboratory research of relevance to breast and cervical cancer. In the case of cervical cancer prevention, her focus is to develop strategies that reduce attrition to treatment including early screening and diagnostics. In the breast cancer care cascade, she focused on molecular and metabolic imaging to prevent recurrence.  A third area in her research program focuses on low cost ablative strategies for local control of cancer in resource limited settings.

Ramanujam has more than 20 patents to-date and over 150 publications for screening, diagnostic, and surgical applications. She has raised over $30M of funding to pursue these innovations. Her work has been through numerous awards including: the TR100 Young Innovator Award from MIT, the Global Indus Technovator Award from MIT, Era of Hope Scholar Awards from the Department of Defense, the Stasnell Family Award from the Pratt School of Engineering at Duke, and the Women in Molecular Imaging Leadership Award (WIMIN) from the World Molecular Imaging Congress (WMIC). She is a Fellow of several optical and biomedical engineering societies including OSA, SPIE and AIMBE. She has also been elected to the National Academy of Inventors and is a Fullbright Fellow.