Nimmi Ramanujam, the Robert W. Carr Jr. Professor of Biomedical Engineering at Duke University and director of the Center for Global Women’s Health Technologies, has been awarded two National Institutes of Health (NIH) RO1 grants to work with industry and non-profit partners to develop strategies for wide-scale screening for cervical cancer in East Africa. The grant represents a collaborative effort between The Pratt School of Engineering, the School of Medicine, the Duke Global Health Institute, Zenalux Biomedical in the RTP, 3rd Stone Design in San Francisco and a number of East African Institutions, including the Kilimanjaro Christian Medical Center in Moshi Tanzania. 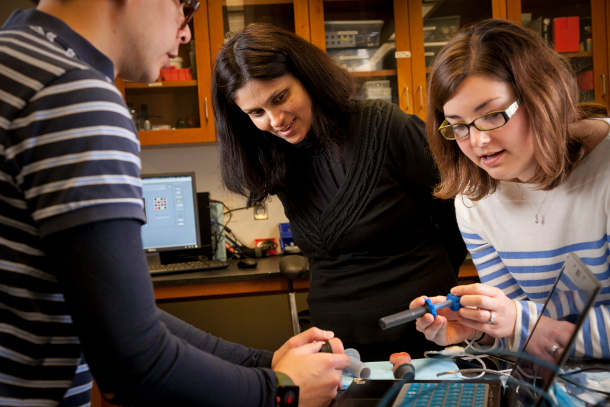 Cervical cancer affects the lives of 500,000 women worldwide each year, and results in more than 270,000 deaths. Because more than 75 percent of cervical cancer cases occur in Africa, where the tools commonly used in America is prohibitively expensive, new solutions must be found.

Current screening efforts—when available—use visual inspection with acetic acid (VIA), similar to what is done in the United States, but without the aid of a magnification device called a colposcope. This lack of instrumentation limits the visualization of important features on the cervix. And because there is only 1 physician for every 45,000 people in countries like Tanzania, the VIA screenings will need to be performed by community health workers in order to achieve scale.

The NIH grants totaling $3.7 Million will support Ramanujam’s work to develop and implement a new version of a colposcope that has the form factor of a tampon with the performance (magnification, resolution, field of view) of a state of the art colposcope. The device, which is connected to a cell phone, is portable and easy to use at the community health level and is a fraction of the cost of current clinical colposcopes. Algorithms that leverage features used by expert colposcopists will automate risk stratification such that community health workers can appropriately triage patients at the point of care.

Another aspect of this project is to design the technology to be used without the need for a speculum, dramatically increasing the comfort of a gynecological exam with the potential for self-examination, much like self-Human Papilloma viral testing.