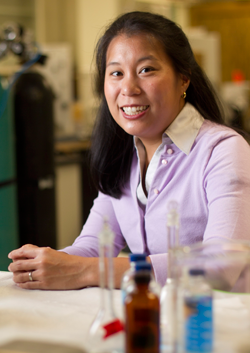 How long have you been at Duke and what brought you here?

I’ve been at Duke for eight years, since 2005. I was drawn the opportunity to be an assistant professor at Duke because this university has a great environment to start research and to teach. There aren’t many universities that allow this kind of opportunity.

What kind of research are you doing right now?

My research area is environmental chemistry and I am an aquatic geochemist. The research I do is mostly related to contaminate metals in the environment. We look at the toxicity of metals, study the amount of metal contaminants in water, soil and sediments, and try to discover ways to mitigate the effects of these contaminants.

Specifically, my research team is split into two projects. Half of my group works on questions related to mercury, which is an environmental neurotoxin. We are trying to answer many questions. For example, what chemical forms of mercury exist in sediments, soil and water? How can we predict its bioavailability to microorganisms? How can we predict its risks to human health? We also have research activities related to the products that come from burning coal for energy. We are interested in the risks of disposing of these products and the hazards related to the trace element toxins in these materials. We’re also looking at how different types of coal and coal-burning processes can affect the chemistry of these products.

Additionally, we are looking at the environmental implications of nanotechnology. Nanotechnology is the manipulation of materials at a very small scale—a scale only slightly bigger than individual molecules. This tiny scale results in a set of reactivities and properties that follows its own rules, which speaks to the uniqueness of nanotechnology and the ways we can take advantage of that uniqueness. Despite the small scales, engineers and scientists have made strides in manipulating materials at this level during the past 20 years. As a geochemist, my perspective is that materials at this scale persist everywhere in nature—they’re ubiquitous. For example, if you take a handful of soil it will be filled with nanoparticles because clays are made of them.

We are interested in studying engineered nanomaterials and their environmental implications. There are many similarities between engineered and natural nanomaterials in terms of their fundamental chemistry. A lot of nanotechnology is not new—many materials we make have natural analogues in the environment. So perhaps we can use this environmental perspective to help us understand some of the risks of this type of engineering.

We do things with nanotechnology for environmental applications, mostly metal-based nanomaterials like zinc oxide and silver, which are used in consumer products. We’re researching methods to use nanomaterials to remediate contaminated sediments, for example. We also have a Superfund project using zero-valance iron (similar to cast iron but nanoscale) as a way to degrade sediment contaminants such as flame retardants.

It’s been cool to see the direction that my research has taken me over the years. I’ve always studied pollutants like mercury that occur naturally, but now I realize there’s a nanoscale reactivity and geochemistry that allows us to answer questions we weren’t able to answer before. This insight has helped me make many connections, and looking back at my eight years here, I would say that my research’s progression has been exciting.

How did your PECASE award from the Department of Energy come about?

The award is run by the Office of Science and Technology Policy in the White House, which asks various federal agencies for nominees. I was nominated through my early career award from the Department of Energy, and they selected the winners from that group.

The PECASE is the highest honor bestowed by the U.S. government on scientists early in their career. How did you feel when you received it?

I was ecstatic! They don’t tell you officially right away, but you kind of figure out what’s going on during the vetting process. I didn’t know that I was nominated, but I got these e-mails from the White House telling me they’re doing a background check on me, and I thought, “Wait a minute.” That’s how I found out, but I didn’t know for sure for two months. When they formally made the decision, they sent us an e-mail saying congratulations and invited us to the White House for the ceremony. There were about 100 PECASE winners there, representing scientists and engineers from universities and federal labs.

What does being the recipient of the award entail?

We each get a research grant for five years, but because I was nominated through the Department of Energy Early Scientist Award, I already had my grant when I was awarded the PECASE. Winning PECASE for me meant a great trip to Washington, DC, getting to meet President Obama, and receiving an incredible honor. The grant has been really important to help get my research off the ground.

What do you see for your career in the next ten years?

I was recently awarded tenure, so now I’m free to pursue research with a long-term perspective. I would like to take what we’re working on and make it influential by focusing on the way that practicing engineers deal with contaminated sediments and water. A lot of the work we’ve been doing is fundamental, but now I would like to make it more practical; practicing engineers can use this information to make better decisions about remediation. Also, I would like to be more involved in the running of the university, like how Pratt is organized and how the administration makes decisions on educational initiatives, for example. I’m interested in making Pratt better.

Do you have any advice for young researchers who would like to be in your shoes one day?

I really encourage students to do research because I have done research since I was a freshman in college in areas that are very different from what I am doing now. The early research experience helped me figure out general fields I was interested in and what I wanted to do. If you might be interested, I suggest reaching out to professors that you find encouraging. It doesn’t hurt to ask. Even though it can be hard to figure out what you’re really interested in, there are ways to be proactive. Sometimes you can read the websites of professors who write about their projects. And sometimes you meet professors who taught a class you found engaging, in which case you should send an e-mail or catch them during office hours! Set an appointment, talk about the research and send them your résumé. For me, I like being able to mentor undergrad students because great professors mentored me and I want to pass that on.

How large is your team of researchers and how can interested students get involved?

I have seven PhD students and four post-docs, so I mostly have grad students, though I often have a few undergrad students during the year as well. In fact, I’m currently am mentoring a chemistry major for her independent study.

I also work with professors in environmental engineering and the Nicholas School of the Environment here at Duke. We share research grants, write papers together and mentor each other’s students. It’s the culture at Duke—a culture of collaboration.

Judy Zhu is a sophomore transfer student from Canada. She is studying mechanical engineering.