It famously took Thomas Edison thousands of attempts to settle on a practical design for the incandescent light bulb. If each crack at a solution had cost him hundreds of millions of dollars, however, he might not have been so keen on using a build ‘em and bust ‘em approach. 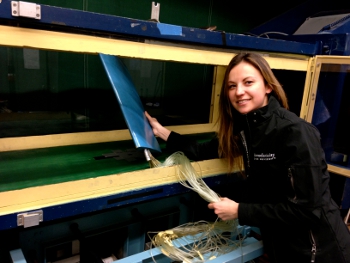 The companies designing turbines for jet engines and electricity production face such challenges today. With multiple rotors spinning in excess of 15,000 revolutions per minute facing incoming airflows of hundreds of miles per hour, the dynamics of the air’s behavior becomes fodder for an engineering student’s worst nightmare. And although computer simulations of even simplified systems can take weeks to run even on modern supercomputers, it is well worth the time and effort.

From initial designs to being bolted to an aircraft’s wing, a typical jet engine costs more than a billion dollars to produce. For example, the design of the GE90—the jet engine that powers the Boeing 777—was begun in 1990, but GE didn’t see a dime of profit for their labors until 2010.

“The entire industry runs these complex simulations,” explains Fanny Besem, a graduate student in the Department of Mechanical Engineering and Materials Science’s aeroelasticity group. “It’s simply too expensive to design an engine, test it and then redesign it.” 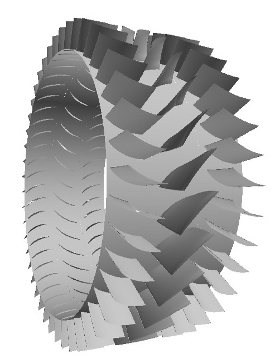 Besem is one of the engineers in Duke’s world-class aeroelasticity group developing and running computer models for computational fluid dynamics (CFD). Up until last year, she was working to find shortcuts in the time- and computationally-intensive process of orchestrating a computational wind tunnel. If engineers could take only a fraction of the variables into account and still predict the solution for an entire compressor, it would save everyone a lot of trouble.

The problem, however, is that nobody really knows which variables can be ignored and which really matter in finding a reliable solution. How many blade rows does it take to accurately model a compressor? Can you ignore the distance between the rotor blades and engine casing? When do the vibrations in the air couple with the natural frequencies of the blades to produce problems, like an opera singer breaking a glass with a single note?

To find out, Besem began working on a collaborative project last year headed by Duke, Purdue University and Rolls-Royce, which is funded by the GUIde5 Consortium—a partnership between numerous universities, government agencies and private companies to find answers to challenges too interdisciplinary and complex for any one institution to tackle on its own.

The five-year experiment, whose computational side is headed by Besem’s doctorate advisor Robert Kielb, associate chair of the Department of Mechanical Engineering and Materials Science, is based on the campus of Purdue University. There, researchers have set up a scaled-down Rolls-Royce-designed compressor and installed a dizzying array of sensors intended to take airflow measurements throughout the chamber.

“That way we can compare the results of our CFD simulations with actual data from a real system,” explains Besem. “We can make sure our models are accurate and use any inconsistencies to improve our calculations.”

Coincidentally, Besem may have flown on a similar jet engine model to pursue her research interests in the United States. Born, raised and educated through undergraduate school in Belgium, she earned dual master’s degrees from Duke and the Royal Institute of Technology in Sweden through a European Union program. Not coincidentally, her advisor Kielb is also an affiliated professor of the Swedish Royal Institute of Technology. 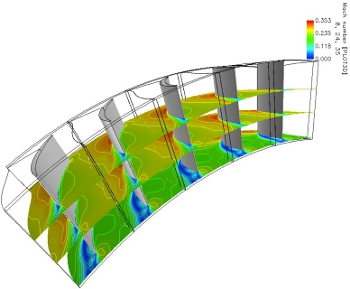 After finishing her master’s program in turbomachinery, she returned home to Belgium. But after a short job search, she decided to return to Durham and pursue a PhD.

Besem won’t get to see the entire Purdue/Rolls-Royce/Duke project through to completion, however, as it the five-year project is just beginning and she is scheduled to graduate in May 2015. She’s hoping to eventually land a job with a jet engine company in the United States. Due to her Belgian heritage and the fact that many engine contracts are linked to the Federal government, however, there will likely be additional hurdles for her to overcome. But that doesn’t dampen her spirits or ambition in the meantime.

And so are her advisors at Duke.

“Only the best students are selected to enter the aeroelasticity graduate program at both the Royal Institute of Technology and Duke, and Fanny is one of the best,” says Kielb. “Fanny has been, and continues to be, successful because of her high intellectual ability, organizational skill, leadership and strong determination. You can see it in how she develops creative solutions and mentors other graduate and undergraduate students in their research projects. She’s an awesome Ph.D. student.”