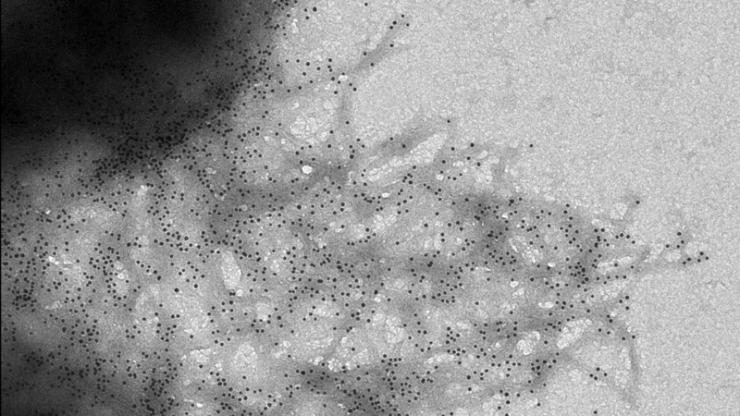 Researchers at Duke University have turned bacteria into the builders of useful devices by programming them with a synthetic gene circuit.

As a bacterial colony grows into the shape of a hemisphere, the gene circuit triggers the production of a type of protein to distribute within the colony that can recruit inorganic materials. When supplied with gold nanoparticles by researchers, the system forms a golden shell around the bacterial colony, the size and shape of which can be controlled by altering the growth environment.

The result is a device that can be used as a pressure sensor, proving that the process can create working devices.

While other experiments have successfully grown materials using bacterial processes, they have relied entirely on externally controlling where the bacteria grow and have been limited to two dimensions. In the new study, researchers at Duke demonstrate the production of a composite structure by programming the cells themselves and controlling their access to nutrients, but still leaving the bacteria free to grow in three dimensions.

The study appears online on October 9 in Nature Biotechnology.

“This technology allows us to grow a functional device from a single cell,” said Lingchong You, the Paul Ruffin Scarborough Associate Professor of Engineering at Duke. “Fundamentally, it is no different from programming a cell to grow an entire tree.”

Nature is full of examples of life combining organic and inorganic compounds to make better materials. Mollusks grow shells consisting of calcium carbonate interlaced with a small amount of organic components, resulting in a microstructure three times tougher than calcium carbonate alone. Our own bones are a mix of organic collagen and inorganic minerals made up of various salts.

Harnessing such construction abilities in bacteria would have many advantages over current manufacturing processes. In nature, biological fabrication uses raw materials and energy very efficiently. In this synthetic system, for example, tweaking growth instructions to create different shapes and patterns could theoretically be much cheaper and faster than casting the new dies or molds needed for traditional manufacturing.

“Nature is a master of fabricating structured materials consisting of living and non-living components,” said You. “But it is extraordinarily difficult to program nature to create self-organized patterns. This work, however, is a proof-of-principle that it is not impossible.”

The genetic circuit is like a biological package of instructions that researchers embed into a bacterium’s DNA. The directions first tell the bacteria to produce a protein called T7 RNA polymerase (T7RNAP), which then activates its own expression in a positive feedback loop. It also produces a small molecule called AHL that can diffuse into the environment like a messenger.

As the cells multiply and grow outward, the concentration of the small messenger molecule hits a critical concentration threshold, triggering the production of two more proteins called T7 lysozyme and curli. The former inhibits the production of T7RNAP while the latter acts as sort of biological Velcro that can latch onto inorganic compounds.

The dynamic interaction of these feedback loops causes the bacterial colony to grow in a dome-shaped pattern until it runs out of food. It also causes the bacteria on the outside of the dome to produce the biological Velcro, which grabs onto gold nanoparticles supplied by the researchers, forming a shell about the size of your average freckle.

The researchers were able to alter the size and shape of the dome by controlling the properties of the porous membrane it grows on. For example, changing the size of the pores or how much the membrane repels water affects how many nutrients are passed to the cells, altering their growth pattern.

“We’re demonstrating one way of fabricating a 3-D structure based entirely on the principle of self-organization,” said Stefan Zauscher, the Sternberg Family Professor of Mechanical Engineering & Materials Science at Duke. “That 3-D structure is then used as a scaffold to generate a device with well-defined physical properties. This approach is inspired by nature, and because nature doesn’t do this on its own, we’ve manipulated nature to do it for us.”

To show how their system could be used to manufacture working devices, the researchers used these hybrid organic/inorganic structures as pressure sensors. Identical arrays of domes were grown on two substrate surfaces. The two substrates were then sandwiched together so that each dome was positioned directly across from its counterpart on the other substrate.

Each dome was then connected to an LED light bulb through copper wiring. When pressure was applied to the sandwich, the domes pressed into one another, causing a deformation resulting in an increase in its conductivity. This, in turn, caused the corresponding LED light bulbs to brighten a certain amount depending on the amount of pressure being applied.

“In this experiment, we’re primarily focused on the pressure sensors, but the number of directions this could be taken in is vast,” said Will (Yangxiaolu) Cao, a postdoctoral associate in You’s laboratory and first author of the paper. “We could use biologically responsive materials to create living circuits. Or if we could keep the bacteria alive, you could imagine making materials that could heal themselves and respond to environmental changes.”

“Another aspect we’re interested in pursuing is how to generate much more complex patterns,” said You. “Bacteria can create complex branching patterns, we just don’t know how to make them do that ourselves -- yet.”