Predicting How Bad the Bends Will Be 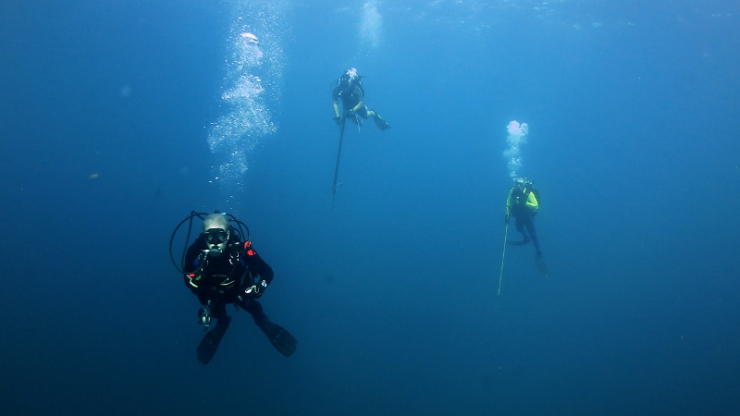 Researchers have created a new model for predicting decompression sickness after deep-sea dives that not only estimates the risk, but how severe the symptoms are likely to be.

The US Navy Diving Manual may incorporate the model into its next update, as will commercial products intended to help recreational divers plan their ascents to avoid “the bends.” “The current guidelines only give you a probability as to whether or not decompression sickness is likely to happen after a given dive,” said Laurens Howle, professor of mechanical engineering and materials science at Duke, who has been working on these models with the Navy for a decade. “This is the first time we’ve been able to also address the likely severity of the potential sickness, helping divers determine acceptable risk.”

All risks have two components—the likelihood of something bad happening and just how bad that something is likely to be. Having a model that accurately provides both aspects will allow divers to better plan safe depths and ascents to help their bodies adjust—preventing painful and potentially fatal results.

Decompression sickness occurs when dissolved gasses such as nitrogen and helium come out of solution inside the body, forming dangerous, painful bubbles. This happens when divers ascend too quickly, and the pressure of gasses within various tissues exceeds that of the surrounding pressure.

“Getting the bends is not fun,” said Greg Murphy, a doctoral candidate in Howle’s laboratory, who has experienced the full severity spectrum of decompression sickness firsthand. “While I was diving on the USS Oriskany, my anchor broke and I shot to the surface. On the ride to the hospital, I could barely breathe even with pure oxygen.”

No divers had to take such risks to gather data for the new model, as the Navy has a dataset of more than 3,000 simulated dives conducted in a carefully controlled hyperbaric chamber. Using that data, along with models of how gasses are absorbed and released by human tissue, Howle crunched the numbers to sort dives into six levels of potential severity. Howle then divided the categories into a mild manifestation grouping (pain only) and a serious manifestation grouping (likely neurological or cardiopulmonary symptoms). He then assigned the same levels of acceptable risk currently used by the Navy to each. With a slight tweak to the definition of mild decompression sickness, the resulting model and boundaries of acceptable risk closely matched the practices already in place in the Navy, making it a useful predictive tool moving forward.

“Now that we have this model, we can use it to quickly and accurately predict the likelihood and severity of decompression sickness simultaneously to make decisions,” said Howle. “We’re also working to optimize the algorithm so that it could operate on a diver-worn computer so adjustments and new predictions could be made on the fly.”