The Pratt Pouch: A Duke innovation Treats HIV in the Developing World

The pouch, comparable in size and shape to a ketchup packet, preserves medication

Not all problems require a complex solution. In fact, when addressing problems in the developing world, the best solutions are often the most basic. This trend arises from the importance of an advancement’s ability to be reproduced and managed locally, which, in resource-poor settings, often translates to simplicity.

Robert Malkin, a professor of biomedical engineering at Duke University and the founder of Engineering World Health (EWH) and the Global Public Service Academies (GPSA), understands this fact well. 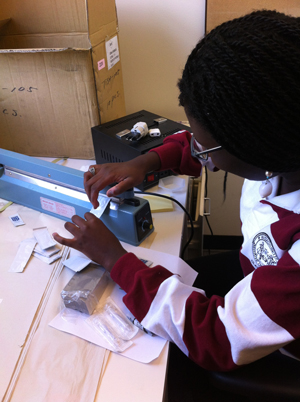 In his most recent work, Malkin and his research team at the Developing World Healthcare Technology Laboratory (DHT-Lab) have used this methodology in designing a novel approach to the problem of mother-to-child HIV transmission in developing countries. During the 24 hours after birth, a baby born to an HIV-positive mother is at high risk, a roughly 15 to 45 percent chance according to the World Health Organization (WHO), of contracting HIV. It is during this brief window that treatment with antiretroviral drugs is vital to minimize the chances of transmission. In resource-poor settings, however, a vast majority of women give birth at home and have limited access to proper medication, which, until recently, could not be effectively stored in a non-medical environment.

All of the common mechanisms for transporting medicine—spoon, dropper, cup and syringe—“destroy the medication, leaving the mother without any of the standard choices available,” explains Malkin. In this way, “we are solving a problem for which there is no other alternative.”

Through a number of experiments conducted at the lab, it was concluded that the inability to preserve the medication for long periods of time was not a result of preservation loss but rather absorption of water by the packaging itself. To counter this dehydration, the team, consisting primarily of undergraduate and graduate students, designed the Pratt Pouch. This storage device, named in recognition of Duke’s engineering school, has a minimized amount of plastic among other features that prevent significant water loss in the medication.

Now in its third generation, the pouch, comparable in size to a ketchup packet, has experienced a number of changes in dimension and material and now consists of five distinct layers. Looking toward continued development, Malkin comments, “The design of a medical device is never finished. Materials change. Manufacturers come and go. Just like any medical device, [the pouch] needs to evolve.” 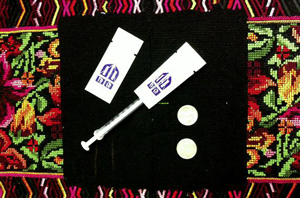 The pouch is undergoing clinical trials in Ecuador, Tanzania and Zambia, and has received unanimous approval from participants with “all mothers saying they would use the pouch…even in a situation where they could potentially use one of the alternative methods,” reports Malkin…”. In addition, the team has received enthusiastic feedback from distributing hospitals that report being able to better avoid “stock out problems,” which result from having to give the entire bottle of antiretroviral medication instead of just the required portion, be it one-third or one-half of the bottle. Malkin and those involved with the pouch’s development are optimistic about these results and their implications for the eventual integration of the device, but remain aware of the obstacles that will need to be overcome before the pouch becomes commonplace in developing-world hospitals.

“Certainly funding is the big problem. We are mostly targeting HIV-positive mothers who deliver at home,” Malkin said. “They don’t have very much money, so realistically, there is no profit to be made in the product.”

This limitation, which Malkin acknowledges as being common of medical devices intended for the developing world, has resulted in the early development being highly grant dependent thus far. Compounding this lack of buying power is the public health community’s nearly exclusive support of proven technologies as opposed to those in early stages of development. Malkin refers to this combination as the “perfect storm of lack of opportunity.” Despite the forecast, the Pratt Pouch has already earned a number of accolades from the international health community that include being named by the World Health Organization as one of 10 of the most innovative products of 2012 and a nomination to receive a seed grant from the Saving Lives at Birth Challenge.

Looking toward the coming years, the veteran engineer states confidently, “My hope is that we can do enough work for 2015 to get our first major orders from the big players in the field.

Aaron Newman is a Pratt freshman majoring in electrical and computer engineering.