Lauren Harper was recognized for her generosity, character and integrity. 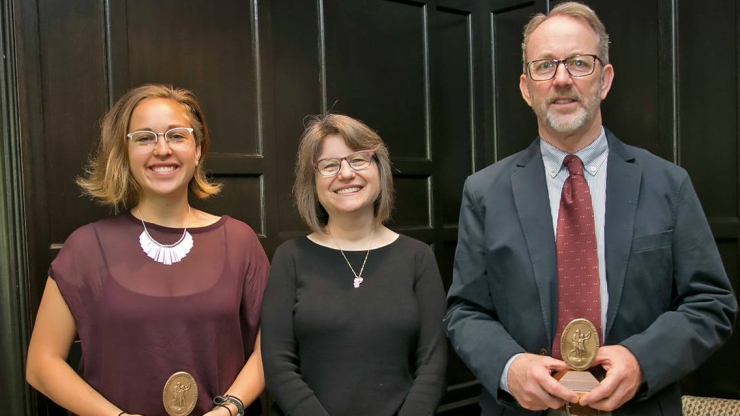 Duke offered fertile ground for the generous spirit Pratt senior Lauren Harper to make a difference. And that difference was honored Friday when Harper and Professor Rick Hoyle and each received an Algernon Sydney Sullivan Award.

The award recognizes one graduating senior and one member of the faculty, staff or graduate student body of Duke University and Duke University Health System for their outstanding commitment to service.

“It’s really a great pleasure to be able to call out those in the community who are really making a difference,” Provost Sally Kornbluth said. “Not only to honor them, but to show that this is a model of how we want our community to be.”

Hoyle and Harper were presented with framed certificates and medallions by Kornbluth.

The award was established in 1925 to honor the memory of Sullivan, a southerner who became a prominent lawyer, businessman and philanthropist in New York in the late nineteenth century. It aims to perpetuate the excellence of character and humanitarian service of Sullivan by recognizing and honoring such qualities in others.

Harper, a senior studying civil engineering in the Pratt School of Engineering, was singled out for her welcoming spirit and active role in Duke’s faith community.

“It’s nice, it’s a good way to stop and reflect on the ways I’ve been involved in communities on campus and how they have shaped me,” Harper said of the award.

Since her first year on campus, she’s been a driving force in Duke Presbyterian Campus Ministry. Always contemplating the connection between her faith, academics and values, she’s backed up her beliefs with action.

She’s been a fixture at Duke University Chapel, participating in weekly worship, fellowship activities and service events. This year. She’s served as co-president of Voices for Interfaith Action. Whether it was working for Habitat for Humanity or bagging lunches for Urban Ministries, she was always ready to help.

“Few students embody the characteristics of this award – generosity, character, spirituality, and integrity – as well as Harper does,” wrote nominator Christy Lohr Sapp, Associate Dean for Religious Life at Duke University Chapel. “She is a blessing to the Duke community and a model of selflessness and service.”

A member of Ubuntu, a diverse on-campus living community, and someone who has built friendships with people of other faiths and sexual orientations, she’s taken the approach that the world won’t change if you limit whom you connect with.

She said she was grateful to find many welcoming people at Duke and has made a conscious effort to be similarly welcoming to others.

“Her humor, compassion, genuine willingness to listen to others and joyful spirit are infectious and inspire others to be more like her,” wrote Presbyterian Campus Minister Rev. Katie Owen Aumann.

Hoyle, a professor in the Department of Psychology and Neuroscience, was honored for the positive impact he’s left on his students and colleagues during his decade at Duke.

Read more about the awards on Duke Today.