The Paths These WINning Alumnae Chose 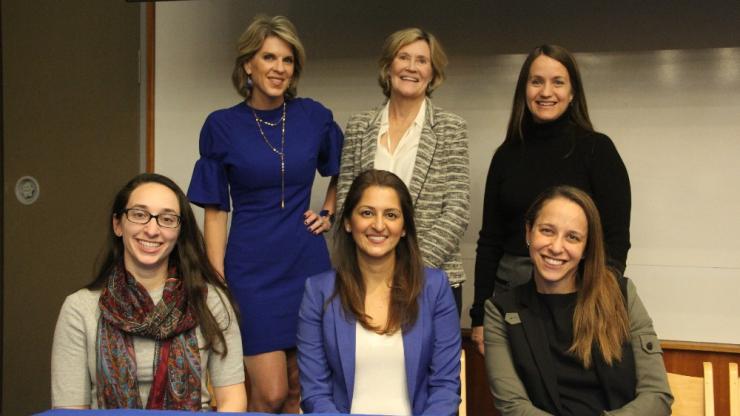 One woman is an ophthalmologist. One works in investment banking. Another works for the CIA.

What do they all have in common? Duke engineering degrees.

And, most of them serve on the Pratt Board of Visitors and belong to the Women’s Impact Network (WIN), a community of Duke women who support Duke philanthropically and as volunteer leaders at the highest levels. Recently, five WIN members and a member of the Pratt Alumni Council convened at the Fitzpatrick Center to share with current students the diverging paths each had chosen after graduation.

The panel was composed of:

Holly Espy CEE’93, an award-winning journalist who co-hosts the daily talk show Good Day DC, moderated the panel. The panelists started by explaining their current jobs and what they like best about their chosen careers. They also shared their favorite moments at Duke—many of which involve the Final Four and meeting lifelong friends or future spouses in the freshman dorms.

But much of the discussion focused on points of uncertainty and other challenges that they had experienced. Here’s what some of the panelists had to say, edited for brevity.

On making decisions at critical junctures:

Stacy Pineles: “I was a (first-year medical) intern, and I was really tired. I was living in Los Angeles and had second thoughts about the path I had chosen (ophthalmology). I applied to two consulting firms, and was offered a job. I could have stayed in Los Angeles and made a lot more money…I was at a critical juncture. I spoke to a lot of people, and some of the most influential were doctors who were 15-20 years ahead of me. They talked to me about the long game, and which career would be most gratifying. Rather than focusing on the minute-to-minute and hour-to-hour, you have to picture your career over 35 years and think about what would be the most fulfilling to your heart. I’m really thrilled with the path I chose because I feel it uses my skillset the best.”

Tanya N.: “My husband and I were both looking for jobs at the same time, in the same location. The job that we found that was the best solution for our family at the time was not in biomedical engineering--that was when I joined the CIA. I went from medical image processing to satellite image processing. At the time, it was a little bit of a compromise. But 22 years later I’m still at it and I do really cool things every day.”

Stacy Klein-Gardner: “By the end of graduate school, I had gone through a lot of work to obtain a PhD in BME, but my heart was in teaching. I always thought I’d retire to be a high school teacher, but I realized that was stupid—that if that’s what I really wanted to do, I should go do it.”

Sara Furber: “Investment banking is like engineering—there’s a very linear progression. It’s a fast-moving train, and if you can stay on it you keep growing in responsibility. After I had been in it for about seven years, I started to wonder if it was the best fit for me. So I raised my hand and said, ‘I’m not sure if this fast-moving train is for me.’ There was a lot of risk in that decision. It took courage and some soul-searching, but I had a lot of confidence and I had developed strong relationships with people I worked with, so it was a conversation I felt comfortable having. I pushed hard, and a job was created for me. It literally transformed the trajectory of my career.”

“There is no linear path... Your view of what’s right for you changes along the way.”

Rachel Fleming: “Four or five years after I graduated I had what I refer to as my ‘quarter-life crisis.’ I was on the fast train, with everyone pushing. But I had a nagging feeling that something wasn’t right. It took me a long time to figure out that I didn’t want to be on the train, then I had to figure out, well, what next? I had an idea of what I wanted to do, but I didn’t even know if it existed. I just started talking to different people and different companies, and called my current firm to tell them I was on the market.”

“You have to be willing to jump off the train.”

Holly Espy: "I knew I wanted to go into news. I told my dad that I just wanted to try it. I got an opportunity to go be a reporter in Steubenville, Ohio. I started working on Christmas Day and I was going to make $6 an hour, and my dad had just paid for me to go to Duke University. My dad said, ‘Holly, if that’s your dream, you go for it. I believe in you.’ My dad was my greatest champion, and a wonderful mentor and role model for me.”

Stacy Pineles: “It’s ok to have help. The more help, the better.”

Tanya N.: “At one point I was working 6:30 to 6:30 every day, six days a week, and I picked my head up and saw that my workload had gone back to normal, but I was still working 12 hours because that had become my habit. It’s a conscious effort to keep that in check.”

Stacy Klein-Gardner: “I achieve balance on average. I have crafted a career that lets me have some control over when I’m working and when I’m not.”

Sara Furber: “There’s a dynamic of urgent versus important. When something comes up right away there’s an urgency—a feeling of ‘I have to get it done right away.’ You can relentlessly respond to ‘urgent’ things and lose track of the things that are really important to you. I think about urgent versus important in terms of a budget—on average, how many nights a week do I want to be home to do homework with my kids? Or do yoga? Or see my girlfriends? If it’s important, you have to dedicate time to it.”

Rachel Fleming: “I got myself on four boards at one time. I just kept saying yes to every exciting opportunity that came my way. I would caution you—the opportunities will always be there, so do what you want to do and change your threshold when you need to.”

Stacy Klein-Gardner: “It still happens. I’m thinking about a grant I’m taking a huge leadership role with—I still feel that someday someone is going to find out that I don’t know all the engineering education research they think I do.”

Holly Espy: “There’s only one you. No one else is bring to the table what you’re bringing to the table, because you’re the only one who can be you at the table. Never forget that… We may solve the problem because we see it from a different point of view. That’s a good thing!”

On whether an engineering background is an advantage or disadvantage:

Holly Espy: “It is the best thing I ever did and I would choose it again. You can be anything you want to be if you are an engineer, and that is the bottom line. You know how to solve problems, you take in massive amounts of information and process it. Here’s the other thing—you don’t have to be strong at everything, you just have to assemble a strong team. As an engineer you know that.”

Stacy Pineles: “When you get to medical school after being in BME at Duke, you will find medical school easy. Honestly. Medical school was the best four years of my life, it was so easy. Set yourself up—this is the time to do challenging things!”

Sara Furber: “My husband was a history major. He had 12 hours of class a week--if he went to class. I had close to 30 hours a week in labs and class, and that was not lost on me. It was hard. There was a cost. But it is a currency that is worth a lot more in the real world than I ever would have thought. The things that people will assume about you is really helpful. It opens a lot of doors.”

Members of the Duke community can watch a recording of the event, using their NetID.