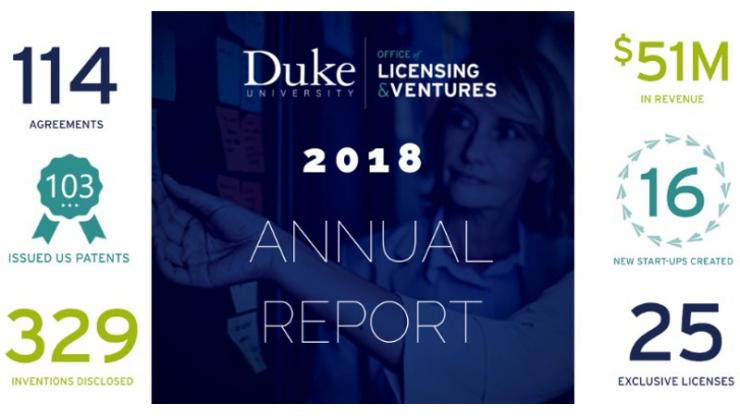 It was a banner year for Duke’s Office of Licensing and Ventures (OLV), and Duke Engineering helped lead the charge.

According to Duke OLV’s 2017-18 annual report, Duke employees filed a record 329 invention disclosures and started 16 new companies, 15 of which are staying here in Durham and the Triangle. Continuing its trend of growth in these areas, the Pratt School of Engineering alone generated five new start-ups, 91 invention disclosures, 11 license/option agreements and 32 issued US patents.

In other innovations well past the patenting stage, Duke-spawned companies raised $526 million in funding during the fiscal year. One recent start-up featuring a campus-wide collaboration between Pratt, Trinity and the School of Medicine called Element Genomics, which focuses on gene regulation and bioinformatics, was acquired by a Belgian pharmaceuticals company for $30 million in upfront and milestone payments.

Duke innovations were also licensed to outside interests. OLV negotiated 114 agreements, 25 of which are exclusive agreements. Licensing brought Duke $51 million in revenue during the fiscal year.