After years of work from hundreds of students, the Duke Ocean XPRIZE team has qualified for the final round of competition aimed at autonomously mapping the ocean floor 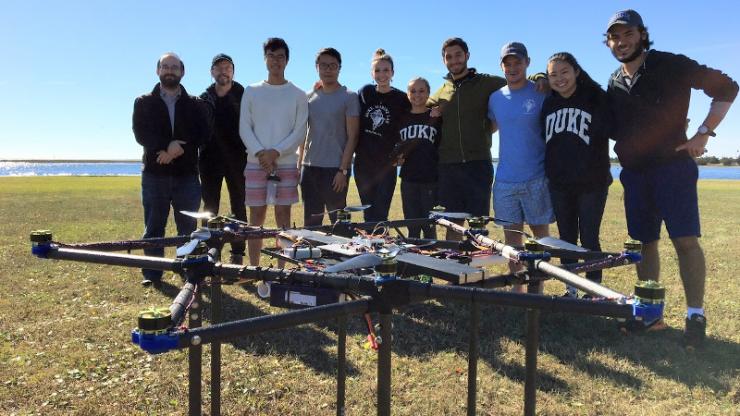 Building on the research of more than two years of students in an innovative engineering course, a Duke University team is among the final nine teams left standing in the $7 million Shell Ocean Discovery XPRIZE that will conclude this fall.

The Shell Ocean Discovery XPRIZE presents teams with the ambitious goal of mapping 250 square kilometers of ocean up to 4,000 meters deep within a half-meter resolution in less than 24 hours. The competition also requires teams to identify and image 10 archeological, biological or geological features. To make the task even harder, no boats or humans are allowed—the surveying must be completed with a system of autonomous drones that can all fit within a standard shipping container.

"A lot of people who do this sort of work for a living didn't even bother trying to compete," said Martin Brooke, associate professor of electrical and computer engineering at Duke and leader of Duke's team. "Most people viewed this challenge as completely and totally impossible. And they might be right."

The XPRIZE contests have a reputation for being challenging and audacious. The Google Lunar XPRIZE competition to send a robot to the moon ended this year without a winner. But the original Ansari XPRIZE to launch people into space with a reusable spacecraft found a winner, and the Wendy Schmidt Ocean Health XPRIZE aimed at developing ocean pH sensors found three.

Whether teams are able to complete the challenge or not, the lofty goals of the XPRIZE competitions serve to push science forward, catalyze new markets and provide incentives for talented, intelligent people to innovate and make significant impacts.

More than 30 teams submitted proposals at the start of the competition, and 19 were chosen as semi-finalists based on their technical merits in early 2017. These teams included more than 350 people from 25 countries, ranging from undergraduate students to industry professionals. The Duke team is joined in the finals by just one other university-based team, from Texas A&M. Both student teams will be competing against teams formed by industry professionals in Germany, Switzerland, Japan, Portugal, England and the United States.

The Blue Devil Ocean Engineering team has taken an unusual tactic—several undergraduate classes were formed at the start of the competition to begin work on the project. While a handful of graduate students and undergraduate students working through independent studies have been able to stick with the project since its inception, most of the work being done each year is by an entirely new set of students. This means that few of the students finishing the competition this fall will have been the ones who started it in 2016.

"Each year there's a bit of a slowdown as the new students come up to speed on the project. But at the same time, they come in with fresh ideas and a lot of energy," said Doug Nowacek, the Randolph K. Repass and Sally-Christine Rodgers University Associate Professor of Conservation Technology in Duke's Nicholas School of the Environment and Pratt School of Engineering. 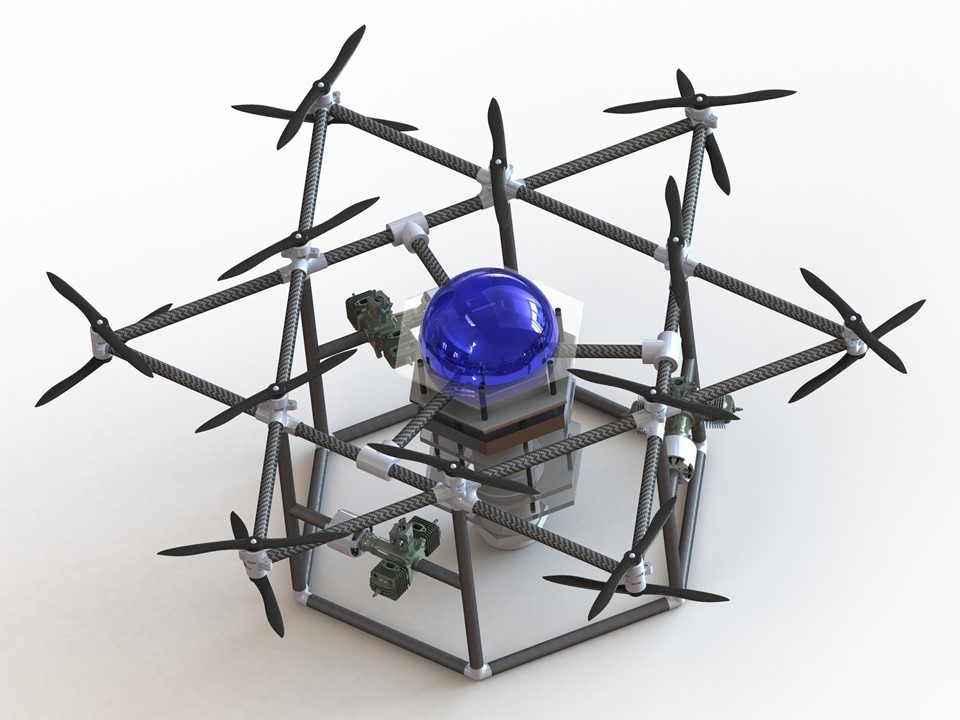 Duke's approach is to use giant heavy-lifting drones to deploy and retrieve a series of sonar-equipped sensors that are lowered from floating platforms at the ocean's surface. This is much more difficult than it sounds.

The drones must autonomously navigate gusting winds and waves that average six meters in height while dropping off and retrieving the sensors. The floating sensor platforms must carry at least 3,500 meters of cable to lower and then pull up the sensor pods, making them extremely heavy for the drones to carry. The sensor pods themselves must withstand the pressure, temperature and salinity of the ocean's depths. And to successfully map the area required, the team must deploy multiple drones making multiple drop-offs and pick-ups, and then seamlessly analyze all of the data.

To advance to the final round, the semifinalist teams had to pass a Round 1 Technology Readiness Test, which comprised site visits to each team by XPRIZE staff and judges. The teams were tested against 11 measurement criteria to show their technological solutions were capable of meeting the operational requirements necessary for rapid, unmanned and high-resolution ocean mapping and discovery.

When the judges visited Duke, they saw a team with all of its components in place. The team has built and flown a heavy-lift drone in Duke Forest. They have sensor pods that have been tested at the Duke University Marine Laboratory in Beaufort, North Carolina. They have software to analyze the resulting data. The combination was enough to move them into the final round of competition.

As the school year draws to a close, more than 50 students are now working to finalize their design. More rotors are being added to the drone to make sure it can lift the heavy sensor pods. Control software is being smoothed so that the drone can pick up the pods while using as little energy as possible. And the sensor pods themselves are receiving upgrades to increase their range so that fewer drops are needed to cover the area required in the final stage of competition. 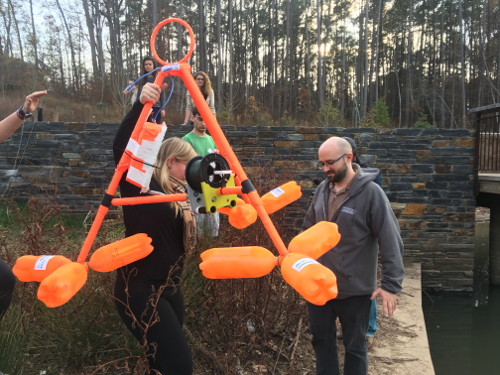 "Our goal is to get this project to the point where all the next group of students need to do is build more of the drones and sensors that we've already completed," said William Willis, a junior studying mechanical engineering who plans to continue participating during his senior year.

"We want to demonstrate a full cycle of dropping off a sensor, mapping an area and picking it up before graduation in May," added Nick Lockett, a senior studying electrical engineering.

The team hopes to get some help assembling more units over the summer from high school students brought in by Tyler Bletsch, assistant professor of the practice of electrical and computer engineering at Duke, who has also been instrumental to the project. Whether or not they are successful in either their short-term goals or the final competition, the massive, long-term project has been valuable for everyone involved.

"This project has given us a chance to work on electrical engineering problems in a real-world setting," said Krista Opsahl-Ong, also a senior studying electrical engineering. "And I don't mean just from a science perspective. We've had to work with a huge team with a lot of moving parts. It's forced us to segment our work and keep track of a lot of parallel projects. And of course it's been a ton of fun to actually get our hands dirty."

The nine finalist teams will be formally recognized and awarded at Oceanology International's Catch the Next Wave conference in London on March 15. Attending the event for the Duke University team will be Brooke and graduating senior Sam Kelly—one of the few undergraduate students who has worked on the project since its inception. The final Round 2 testing will take place during October and November of 2018.