This is the ninth and final installment in a series of profiles on notable Duke Graduate School alumni. The series is part of the school's celebration of its 90th anniversary in 2016. For more information about the anniversary, visit gradschool.duke.edu/90. 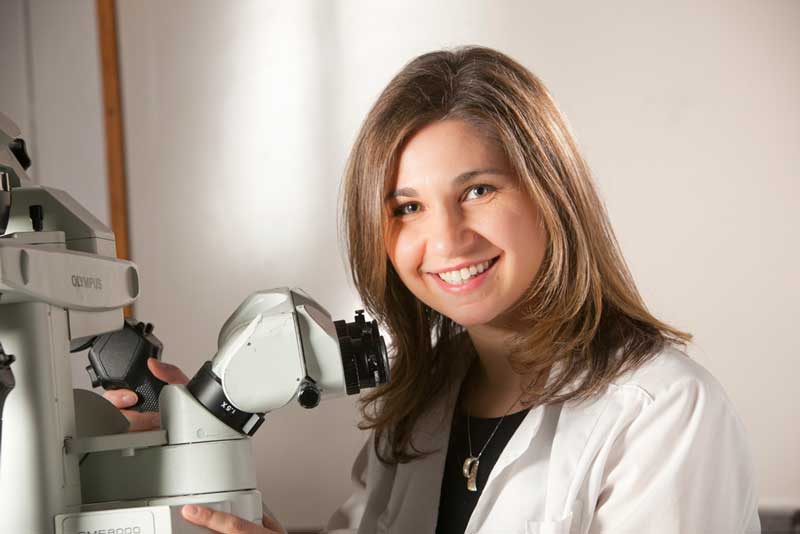 Her grandfather, Marvin, developed magnetic-tape recording during his 20s, is in the Inventors Hall of Fame, and received the National Medal of Technology from President George H. W. Bush in 1990. Her father, Carl, was a noted ophthalmologist who first conceived of a new class of glaucoma drugs while he was a biochemistry major at Yale. That idea led to Xalatan, currently the leading drug in glaucoma therapy.

Following in their footsteps, Camras began working in a glaucoma research lab at 16, designed a new glaucoma therapy with her father as a sophomore at Northwestern, cofounded a startup based on that idea during her first year as a Ph.D. student at Duke, and now works as the company’s chief scientific officer.

“The only proven treatment for glaucoma is to reduce eye pressure,” Camras says. “So we set out to invent a device that is better than any existing treatment to relieve eye pressure and save sight.”

What she and her father designed was the Camras Shunt, a device that, aside from trying to improve the success rate of glaucoma surgery by doing a better job of reducing eye pressure, would also be the first device that allows for individualized treatment.

“Eye pressure cannot be adequately controlled with existing surgical treatments mainly due to unpredictable tissue response in the current drainage site,” Camras says. “Therefore, my father and I came up with a new surgical approach and novel device to circumvent the issues with the traditional site of drainage, leading to predictable, adjustable, and controllable outcomes.”

After her father died in 2009, Camras cofounded her startup in his honor to continue refining their creation. Camras Vision, based in Research Triangle Park, has received investor financing, multiple Small Business Innovation Research awards from the National Science Foundation and the National Institute of Health, and competitive small research loans from the North Carolina Biotech Center.  “I am passionate about creating something to truly help people,” Camras said, “and saving sight is certainly a cause worth fighting for!”