Every year waste treatment facilities in the United States process more than eight million tons of semi-solid sewage called biosolids—about half of which is recycled into fertilizer and spread on crop land.

The practice helps solve storage issues and produces revenue to support the treatment plants, but what else is being spread in that sludge?

As industry invents new materials and chemicals for modern products, many find their way to our skin and bloodstream and, subsequently, into our sinks and toilet bowls. More than 500 different organic chemicals have been identified in the biosolids used as fertilizer across the United States. 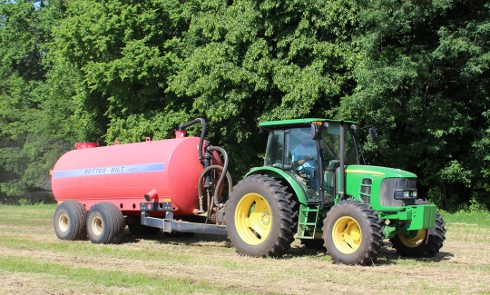 Federal law regulates remnant levels of heavy metals and pathogens in the biosolid fertilizer, but other chemicals are not currently accounted for because it has been prohibitively expensive to even begin sorting out which ones might be ecologically unfriendly, says Claudia Gunsch, professor of civil and environmental engineering at Duke University.

In a recent study, Gunsch and colleagues from Duke’s Pratt School of Engineering describe a new, cost-effective method for screening chemicals for potential environmental impact. They have used the test to show that triclosan, an antimicrobial agent currently under fire from environmentalists, has troubling concentrations in the environment, and they raise suspicions about three other commonly used antimicrobial products.

The team describes their new testing method and some of its early findings in the Feb. 4 2014 Journal of Environmental Science & Technology.

“Because we’re finding many emerging contaminants in biosolids, we wanted to develop a method where you could check them quickly and efficiently and flag the most potentially dangerous ones for more complex measurements,” said Ryan Holzem, a graduate student in civil and environmental engineering at Duke and first author on the study.

An important benefit of fertilizing soil is replenishing nitrate levels, which are crucial to growing plants. One indicator of the soil’s health is the rate at which native bacteria are breaking down those nitrates through a process called denitrification. If antimicrobials or other chemical agents are affecting the bacteria’s ability to complete this process, the soil’s quality is degraded.

The new screening technique involves growing a bacterium commonly found in soil that is important to the nitrogen cycle—Paracoccus denitrificans—in pure laboratory cultures.  Researchers then add various amounts of the chemicals in question to determine the minimum amount that affects the denitrification process. 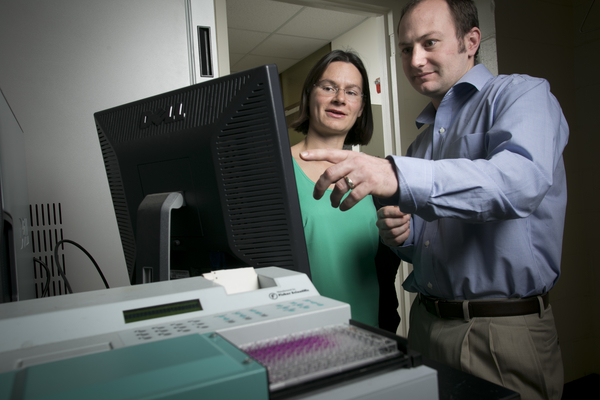 “We chose the nitrogen cycle as an indicator because we wanted to represent an environmental process that is critical to agriculture,” Holzem said. “Typically you have to use a complex, $50,000 piece of equipment to measure the gasses that are produced by the active bacteria. But our method isolates denitrification on its own so that we can use simple processes to measure it.”

To test the new screening technique, Holzem and Gunsch worked with Heather Stapleton, associate professor of civil and environmental engineering, to examine six commercial antimicrobial chemicals. Two are used in abundance: triclosan, which is found in most antibacterial soaps and toothpastes, and triclocarban, which isn’t far behind in both uses and criticisms. They also looked at four emerging antimicrobial compounds used in applications such as pesticides, paper mills, deodorants and antimicrobial household goods.

The Duke team found that environmental levels of triclosan should raise an immediate red flag, given its effects on the critical Paracoccus bacteria, and that three of the other five compounds tested are found in concentrations high enough to warrant concern.

The results showed not only that the technique works, but that it is more sensitive than laborious and more expensive testing methods involving measurements of gene expression and cell viability.

While the screening process only looked at the effects of six antimicrobial agents on one indicator of environmental health—the nitrogen cycle—Gunsch and Holzem say the technique could be used to test a variety of compounds through many different ecological indicators.

“We hope that companies developing new chemicals might use this method to start looking at potential environmental threats before incorporating them into consumer products,” said Gunsch.

Their work was supported in part by the National Science foundation grant CBET-0854167.