Originally posted by the Nicholas School of the Environment 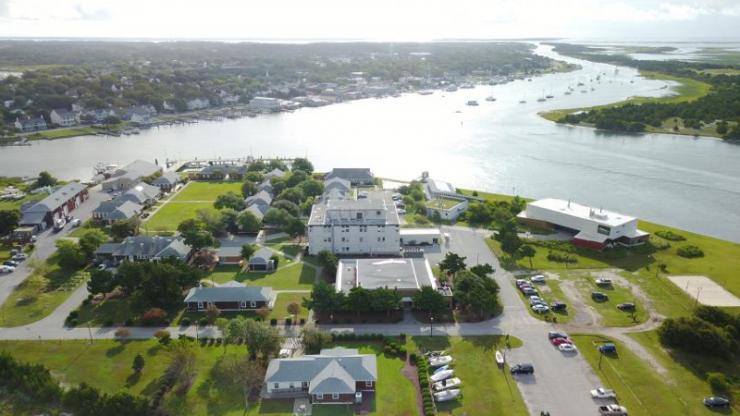 Note: If you are a faculty member interested in learning more about the new semester-at-Beaufort program, contact Andy Read, director of the Duke Marine Lab, at aread@duke.edu.

DURHAM, N.C. – It’s not every day that you have to take a boat to get to work, but that’s what Lee Ferguson had to do when the drawbridge to Pivers Island temporarily broke at the start of the semester he recently spent at the Duke University Marine Lab.

Ferguson, whose research focuses on developing new tools and tracers to monitor marine pollution, is associate professor of environmental chemistry and engineering at Duke’s Pratt School of Engineering and Nicholas School of the Environment.

He’s based in Durham but spent the fall 2017 semester teaching and doing research at Duke’s year-round coastal campus on Pivers Island in Beaufort, N.C.

His time as a visiting faculty member at the Marine Lab was made possible by a new program supported by the Provost’s Office that aims to promote greater engagement between the two campuses by giving Durham-based faculty the opportunity to spend a semester in Beaufort.

“Coming to the Marine Lab allowed me to engage with colleagues in marine science and policy – something I haven’t been able to do as much as I would have liked from my office and lab up in Durham. It also allowed me to take the time to focus on new avenues for my research and explore new approaches to teaching,” says Ferguson, who was the first faculty member to take part in the program. 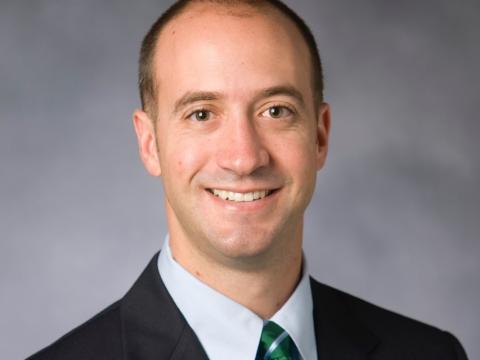 Andy Read, director of the Marine Lab, says Ferguson’s experience is indicative of what other faculty members who take advantage of the program can expect.

“We’re a highly collaborative, tight-knit community of faculty and students, with state-of-the-art research facilities, small class sizes and full digital connectivity to Duke’s main campus,” Read says. “Many faculty will find they can do just about everything here that they do in Durham. The chief difference is you can see the ocean right outside your window.”

A Culture of Engagement

Ferguson says he was immediately drawn to the new program not only because he loves Beaufort and owns a house there, but because he felt it would present an opportunity to engage with faculty peers and students, and reflect on his teaching and research, in ways that were not always possible in a larger campus setting.

“I was able to carve out more time to really focus on synthesizing some of the things I had already worked on in my research and put them into context with related research that was going on at the Marine Lab,” he says. “The small size and informal atmosphere of the Marine Lab made it easy to bounce ideas off colleagues whose expertise was different from mine.”

During one particularly productive car ride to an off-island meeting, Ferguson had the chance to discuss his ideas for a new research project with three Marine Lab faculty members with whom he was riding. They’ll soon be submitting a grant proposal for that project – a meeting of the minds that might not have occurred if he was three hours away in Durham.

“There’s a strong sense of community at the Marine Lab,” he says. “Between Monday morning coffees, weekly seminars, and casual conversations in the dining hall or on the decks overlooking Beaufort Inlet, it’s easy to get engaged.”

That culture of engagement extends to the classroom.

When Ferguson was considering what course he could teach during his semester in Beaufort, he noticed there was a coastal marine pollution class in the books that hadn’t been taught in several years. Drawing upon his own expertise using high-performance mass spectrometry techniques to track marine contaminants, and with input from Marine Lab faculty in a wide range of fields, he updated the course.

“The idea was to approach pollution and anthropogenic inputs to the coastal ocean from a number of perspectives, including scientific, engineering, policy, and management,” Ferguson says. Incorporating the policy and management perspectives was particularly important, given that many of the students who enrolled in the course were pursuing Master of Environmental Management degrees in coastal environmental management.

“My research is primarily focused on the science and engineering end, so being able to call upon colleagues who are the go-to experts on the policy and management end was a tremendous asset,” he says.

Once he started teaching the course, he quickly learned that in addition to adjusting the course content, he also needed to adjust his teaching style.

“Because of the small class sizes and interactive learning environment at the Marine Lab, courses are less about lecturing and more about leading group discussions and faculty-guided exploration of the issues,” Ferguson says. “Once I got used to that, I found it was refreshing to get up and not talk at people for an hour, but to have more of a discussion with them. And I think the students got a lot more out of it, too.”

Although he was glad that his status as visiting faculty freed him from the meeting gridlock that can eat up much of a faculty member’s day, Ferguson emphasizes that he was never more than a telepresence call away from any key meetings taking place in Durham.

Seeing the ocean and being able to feel the sea breeze through his office window was also a bonus.

“I don’t want to say I came down here just to look out on the ocean, but it is definitely a benefit of being down here.  If you have an interest in the ocean, then there is no better place to be,” he says.

As for that broken drawbridge? It was only out of service for a short time, and Ferguson found that, far from being an inconvenience, taking a boat to work was a pretty cool way to start his day.

“It sure beats the rush-hour commute in Durham,” he says.

This story was written by Courtney Edwards, assistant to the director and communications and development program coordinator at the Duke University Marine Lab.