Duke engineering professor David Needham took the stage in Copenhagen, Denmark on Feb. 7, 2013 to be formally presented to an audience of government officials and scientific peers and their families as one of the Danish National Research Foundation (DNRF)’s Niels Bohr Professors.

Needham, a professor of mechanical engineering and materials science at the Pratt School of Engineering, received the award recognizing his 2012 appointment as a Bohr Professor. 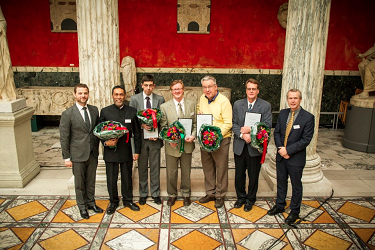 The presentation was a highlight of the Elite Forsk (Research) Conference, an annual event of the Danish Ministry of Science, Innovation and Higher Education launched in 2006 to reward the efforts of some of Denmark's most talented researchers.

Danish Minister for Science, Innovation and Higher Education Morten Østergaard and DNRF Director Thomas Sinkjaer presented Needham and five other internationally recognized scientists selected out of 18 candidates last year for the Bohr professorships.  The professorships were established to “enrich Danish research communities with excellent international researchers who are able to…act as catalysts in the Danish research environments” and whose research “will spread like ripples in the water to other research and teaching environments,” according to Sinkjaer.

Needham is posted at the University of Southern Denmark (SDU), in Odense, Denmark, in the Institute for Physics, Chemistry and Pharmacy, where he is establishing the Center for Single Particle Science and Engineering. The center will be supported over the next five years by $5 million from the DNRF, plus $1 million in co-financing from SDU.

In addition to enhancing education at the university and across Denmark, and bringing Needham’s unique micropipet techniques to fields such as physics, chemistry, pharmacy, biology, living technologies and food science, the center will focus on developing novel strategies for using micro- and nanotechnology to improve drug delivery, specifically for cancer treatments.