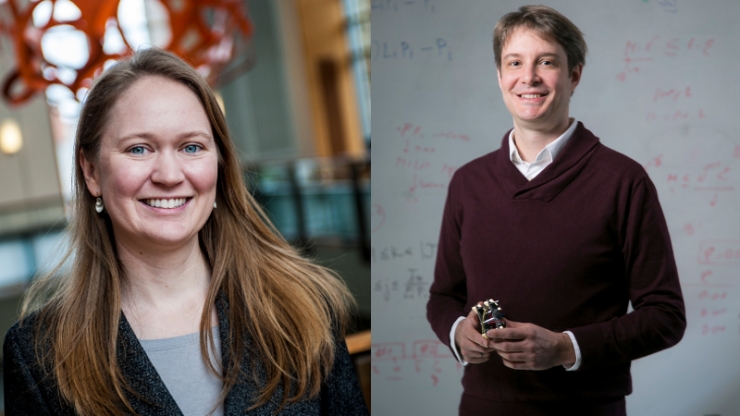 Mikkelsen’s award will provide $510,000 over the next three years to perform nanofabrication and optical experiments to investigate nanoparticle-based perfect absorber coatings. These coatings currently rely on a layer of silver nanocubes precisely separated from a thin film of gold by a few nanometer-thick polymer. When light strikes this “metasurface,” a specific wavelength—or color—gets trapped on the surface of the nanocubes in packets of energy called plasmons, eventually dissipating into heat.

Previous work has shown that this technique is capable of near-perfect absorption, works at wide angles and can be tuned to absorb different wavelengths of light from the visible spectrum to the near infrared. Making the technology even more promising for applications such as thermal imaging or masking the heat signatures of objects, Mikkelsen’s self-assembly-based fabrication technique vastly reduces cost and manufacturing issues.

The new grant will support the continued development of the technology by utilizing environmentally robust materials suitable for naval applications and integrating active materials that can tune and adapt the coating’s properties through external stimuli such as heat, light or electric field. The award completes a Department of Defense hat trick for Mikkelsen, who has also received young investigator awards in the past year from the Air Force Office of Scientific Research and the Army Research Office.

For example, several recent incidents, such as the capturing of the RQ-170 Sentinel U.S. drone in Iran, clearly illustrate the susceptibility of naval CPS to attacks well beyond the standard cyber-attacks. Physical attacks on sensors, such as GPS-spoofing, can have similar devastating effect on system operation.

Pajic’s research seeks to address these by creating a high-assurance design framework for Naval CPS. He and his team plan to exploit physical phenomena present in any interaction between cyber and physical worlds to derive resilient cyber-physical components with strong formal performance and resiliency guarantees. They will also produce a set of design methods and tools to ensure that no security vulnerabilities are introduced during implementation of these security-aware systems.