For the next five years, the $570,000 grant will help fund Maiken Mikkelsen’s research into light-matter interactions in nanoscale photonic structures. 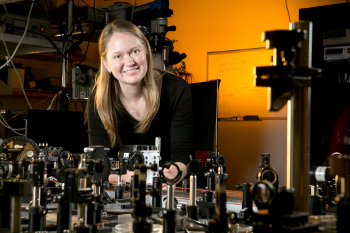 Many scientists believe the next revolution in computer technology will come at the quantum scale. Rather than controlling the movements of electrons to store data, engineers could theoretically control their fundamental quantum spin and behaviors that appear only on the quantum level. This would allow technologies such as smaller, denser electronics and inherently secure communications.

Mikkelsen’s research will focus on gaining a fundamental understanding of how light and matter interact in structures thousands of times smaller than the width of a human hair. She will study how sources of single photons interact with specifically engineered nanostructures designed to create highly confined and intense optical fields.

The grant also contains an outreach component, focusing on the pipeline of future scientific researchers. Mikkelsen will seek to open a newly-designed Photonics Academy, offering local high school students exposure to cutting-edge photonics and science careers. At the collegiate level, her research will be integrated into undergraduate courses and she will offer expanded mentorship for junior female physicists ranging from undergraduate to postgraduate levels at Duke, with the aim of increasing retention of women in science and research.

This is Mikkelsen’s second major award in 2015; in January, she received an award from the Air Force Office of Scientific Research Young Investigator Program.

“I am delighted and honored to receive this NSF CAREER award,” said Mikkelsen. “And I’m excited about how this research will bring us closer to understanding and controlling light-matter interactions in new, highly-engineered nanomaterials with the potential to enable transformative technologies.”