For This Metal, Electricity Flows, But Not the Heat

Law-breaking property in vanadium dioxide could lead to applications in thermoelectrics, window coatings

Adapted from a press release from Lawrence Berkeley National Laboratory 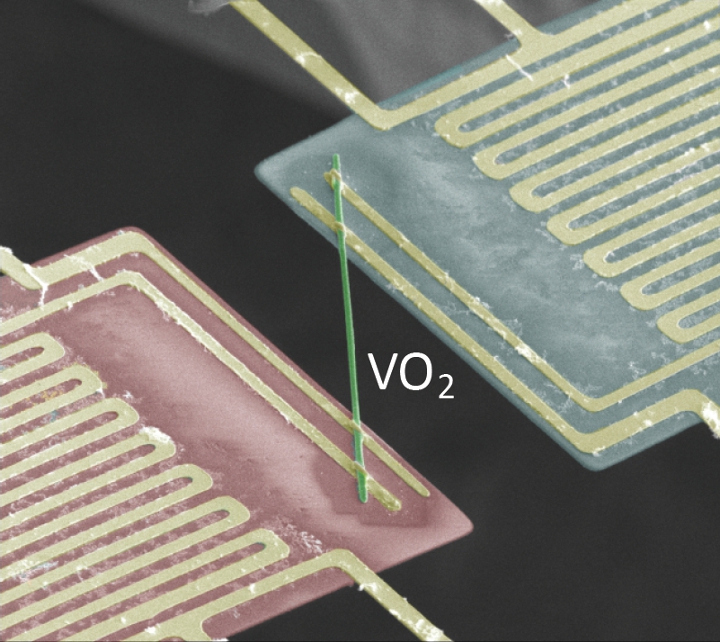 There's a known rule-breaker among materials, and a new discovery by an international team of scientists adds more evidence to back up the metal's nonconformist reputation. According to a study led by scientists at the Department of Energy’s Lawrence Berkeley National Laboratory (Berkeley Lab), the University of California, Berkeley, and Duke University, electrons in vanadium dioxide can conduct electricity without conducting heat.

The findings, published in the Jan. 27 issue of the journal Science, could lead to a wide range of applications, such as thermoelectric systems that convert waste heat from engines and appliances into electricity.

Olivier Delaire, associate professor of mechanical engineering and materials science and of physics at Duke, and his colleagues at Berkeley Lab have been trying to unlock the mysterious material’s secrets for the better part of a decade. By simulating the fundamental behaviors of the material’s electrons, they’ve managed to get a better understanding of vanadium dioxide’s stability, structure and functional properties.

For most metals, the relationship between electrical and thermal conductivity is governed by the Wiedemann-Franz Law. Simply put, the law states that good conductors of electricity are also good conductors of heat. That is not the case for metallic vanadium dioxide, a material already noted for its unusual ability to switch from an insulator to a metal when it reaches a balmy 67 degrees Celsius, or 152 degrees Fahrenheit.

“There’s been this conundrum about vanadium oxide,” said Delaire, who also has an appointment at Oak Ridge National Laboratory. “When vanadium oxide switches to a metal, its electrical conductivity increases by 1000 times, but its thermal conductivity changes little when it should increase in a similar way. This study was meant to probe and answer some of those lingering questions by looking at its atomic vibrations.”

Using results from simulations and X-ray scattering experiments, Delaire and his colleagues were able to tease out the proportion of thermal conductivity attributable to the vibration of the material's crystal lattice, called phonons, and to the movement of electrons.

To their surprise, they found that the thermal conductivity attributed to the electrons is ten times smaller than what would be expected from the Wiedemann-Franz Law.

"The electrons were moving in unison with each other, much like a fluid, instead of as individual particles like in normal metals," said study principal investigator Junqiao Wu, a physicist at Berkeley Lab’s Materials Sciences Division and a UC Berkeley professor of materials science and engineering. “For electrons, heat is a random motion. Normal metals transport heat efficiently because there are so many different possible microscopic configurations that the individual electrons can jump between. In contrast, the coordinated, marching-band-like motion of electrons in vanadium dioxide is detrimental to heat transfer as there are fewer configurations available for the electrons to hop randomly between."

Such materials can be used to help scavenge or dissipate the heat in engines, or be developed into a window coating that improves the efficient use of energy in buildings. Imagine a window that automatically blocks ultraviolet radiation when the sun heats it a few degrees. Vanadium oxide could potentially also be used as a transistor in computer processers, as it switches from conductor to insulator in less than 100 femtoseconds—about 100 times faster than silicon transistors on the market today.

Yang noted that there are more questions that need to be answered before vanadium dioxide can be commercialized, but said that this study highlights the potential of a material with "exotic electrical and thermal properties."

While there are a handful of other materials besides vanadium dioxide that can conduct electricity better than heat, those occur at temperatures hundreds of degrees below zero, making it challenging to develop into real-world applications, the scientists said.

Other co-lead authors of the study include Sangwook Lee at Kyungpook National University in South Korea, Kedar Hippalgaonkar at the Institute of Materials Research and Engineering in Singapore, and Jiawang Hong at the Beijing Institute of Technology in China. Lee and Hippalgaonkar started work on this paper as postdoctoral researchers at UC Berkeley. Hong began his work as a postdoctoral researcher at Oak Ridge National Laboratory. The full list of authors is available online.

Additional support for this work came through the use of facilities supported by the Electronic Materials Program at DOE's Office of Science.

Lawrence Berkeley National Laboratory addresses the world’s most urgent scientific challenges by advancing sustainable energy, protecting human health, creating new materials, and revealing the origin and fate of the universe. Founded in 1931, Berkeley Lab’s scientific expertise has been recognized with 13 Nobel Prizes. The University of California manages Berkeley Lab for the U.S. Department of Energy’s Office of Science. For more, visit https://www.lbl.gov/.

DOE’s Office of Science is the single largest supporter of basic research in the physical sciences in the United States, and is working to address some of the most pressing challenges of our time. For more information, please visit energy.gov/science/office-science.