Lorenzini, MEMS ’87 with a minor in computer science, has always enjoyed the challenge of complex computer programming.

When Duke alumni fondly recall memories from their undergraduate years, such recollections invariably include impromptu games of Frisbee on the quad, hanging out on a bench, and running to catch a bus on West Campus. However, for Court Lorenzini, some of his favorite college experiences occurred in the Duke laboratories, as the young Lorenzini sat in front of his then-state-of-the-art, 42-pound compact portable computer, which was complete with green screen and two (not one!) floppy-disk drives.

Lorenzini, MEMS ’87 with a minor in computer science, has always enjoyed the challenge of complex computer programming. In fact, in researching and writing his junior/senior thesis on fighter plane wing deformation under mechanical and thermal load at Mach speeds or higher, Lorenzini wrote a million lines of code for a finite element analysis package in Fortran for surface analysis. 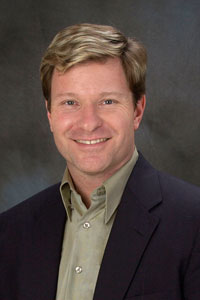 “It was an incredibly complex project, the likes of which had never been seen or done before, because there were mechanical and thermal loads on every geometric surface of the model,” Lorenzini recalls. “At one point, I spent three days straight in the lab working on this project and I completely lost track of time. A classmate of mine eventually had to drag me out of the lab. There were about a million lines of code by the end, and I was really happy with my work.”

Lorenzini also brought this same passion and dedicated work ethic to one of his favorite activities while at Duke: designing his winning entries for the annual engineering egg-drop contest.

“I won a few of those competitions, and I remember those were highly-contested back then,” said Lorenzini of the competition in which students are charged with inventing a contraption that will keep an uncooked egg from breaking when it is dropped from various heights. “I have always wanted to be an engineer and I’ve always been interested by technology,” Lorenzini reveals, “but I also wanted to go into business and become an entrepreneur.”

After graduation, Lorenzini found jobs in industry that afforded him practical experience and enabled him to learn the technical aspects of his chosen career while expanding his skill set. Lorenzini also pursued graduate studies at Stanford University and the University of California, Berkeley. However, Lorenzini states he was more interested in gaining knowledge than acquiring degrees.

Lorenzini refers to his professional career as a “fascinating ride” because of the wide array of industries and experiences in which he has worked.

“I love learning the new aspects of each industry where I work,” Lorenzini states of his varied ventures in semiconductor equipment, electronic commerce, and entrepreneurship in the Silicon Valley area of northern California. Lorenzini has personally started four companies and has managed two others. One of those companies, DocuSign, a Web-based electronic signature company he co-founded in 2003, is about to go public. He is currently the CEO and co-founder of a sustainable energy start-up called Rainier Renewable Energy.

Lorenzini has some practical advice for current Duke students.

“I have been fortunate that several of my endeavors have been successful. I’ve found that when you follow your strengths and passions, you become happier and more successful yourself.” However, Lorenzini advises recent graduating students that they don’t necessarily need to “wait to find a job; create a job where you will be happy and work productively.”

While at Duke, Lorenzini was not an “all work and no play” kind of student.  In fact, he actively participated in club volleyball and soccer and was an enthusiastic member of Sigma Alpha Epsilon fraternity. Lorenzini and his wife, Robin, who also happens to be a 1987 Duke graduate (Trinity College), met on campus in 1990 and have one daughter.