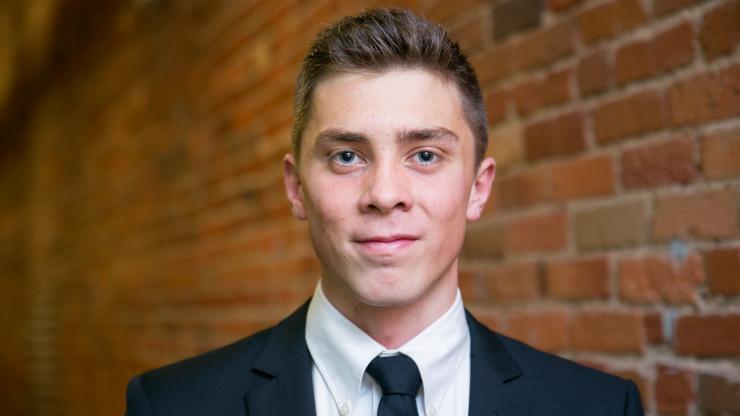 The scholarship covers a student’s tuition and living expenses while completing a graduate degree at the University of Cambridge. Myhre, of Buckhannon, West Virginia, is Duke’s 13th Gates-Cambridge Scholar.

The Gates-Cambridge Scholarship program began in 2000 with a grant of $210 million from the Bill and Melinda Gates Foundation. The scholarships enable students from around the world to pursue a full-time postgraduate degree in the subject of their choosing.

The Gates-Cambridge Scholarship program began in 2000 with a grant of $210 million from the Bill and Melinda Gates Foundation. The scholarships enable students from around the world to pursue a full-time postgraduate degree in the subject of their choosing.  Scholars are chosen on the basis of their intellect, leadership potential, commitment to improving the lives of others and the academic fit with scholarship at Cambridge.

At Duke, Myhre is majoring in mechanical engineering with a minor in energy engineering. He plans to pursue a master of philosophy in engineering for sustainable development in the Department of Engineering at the University of Cambridge.

Myhre has been active as Duke Engineering senior class president and Engineering Student Government vice-president, a team leader for Duke Motorsports and as captain of the rugby team.  He studied abroad in both France and New Zealand and spent two summers in Burundi interning as an engineer in a hospital.

“I have known Jack for a while now—even before he came to Duke—and his intellect, character, humility and devotion to others have equipped him to be a formidable force for good in the world,” said Alex Hartemink, faculty director of the Office of Undergraduate Scholars and Fellows and professor of computer science and biology. “These are qualities all of us aspire to demonstrate, and he will be an excellent representative of Duke University and its Pratt School of Engineering."

Long term, Myhre hopes to bring sustainable energy engineering solutions to areas of rapid development and growth, particularly sub-Saharan Africa where he was raised and still considers home despite “a life characterized by travel and shifting residences.”

Myhre hopes to use his time at Cambridge to develop skills that allow him to make a difference in East Africa, making its growth be sustainable and not detrimental to the people and land he loves.