You might not expect a pair of mathematicians to be at the root of Duke’s newest art installation. But why not? The new sculpture—a series of four origami-esque hanging orbs to be installed in the atrium of the Fitzpatrick Center on October 20—is a celebration of the beauty of geometry.

“In my mind, math and art go together,” says George Hart, the New York-based mathematical sculptor and computer science professor who created the work. “People often don’t realize that math is very creative—they think of fixed rules for addition and multiplication, but that’s just arithmetic. Once you get to be a professional mathematician, you can be very creative. You make new proofs and theorems, and they’re judged by how beautiful and elegant they are. Both math and art are about enjoying seeing things and understanding what you are looking at. There are deep fundamental connections there.” 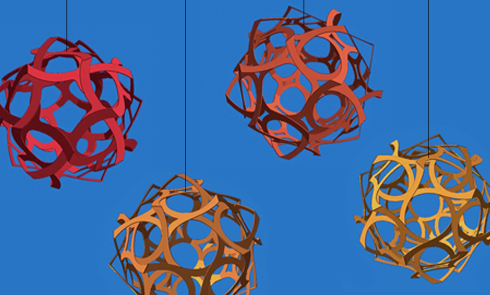 Four Orbs: 4, 5, 6 and 7 feet in diameter, progressing in the openness of weave and lightness of color so that the sculpture “blossoms” as it rises

Ingrid Daubechies appreciates that. The James B. Duke Professor of Mathematics and professor of electrical and computer engineering at Duke, Daubechies constructed the mathematical wavelets used to process signals for image compression—making possible the jpeg2000 image format, for example. She is now employing “big data” to analyze artwork, and decorates her office with museum postcards of paintings.  When she recently won the handsomely endowed Nemmers Prize for her work in theoretical signal processing, she saw it as an opportunity to realize an idea she’d been mulling for a while —to commission a sculpture by Hart for Duke University.

“I think his work is beautiful,” she says. “The way the pieces fit together, the variation and repetition—when you see it you get a ‘wow’ feeling that’s common to both math and art.”

On a Sunday afternoon, October 20, the entire Duke community is invited to help to piece together the multi-part sculpture before it is hoisted into the air, where it will hang from the FCIEMAS ceiling into the atrium stairwell. There will be snacks, tools and tables ready for anyone who drops in to help bolt together some of the laser-cut aluminum components that will form the four orbs.

“I really like the idea of a whole group of people coming to work together and have fun together," says Daubechies. “The Fitzpatrick Center is the perfect space to house a sculpture like this, both because of its architecture and its interdisciplinary nature.”

George Hart will be there to oversee the effort, which he likens to an old-fashioned barn-raising. He’s led several similar group installations before, including at Albion College (see video). “I like this way of installing the sculpture because it creates a sense of community,” he says. “People who participate feel a sense of ownership—‘I helped build that sculpture.’ Even if they just put in one screw, it ties them to the work and gets them engaged in the world of art.”

As a computer science professor with a doctoral degree in electrical and computer engineering, he also appreciates that the work is being installed in a space frequented by engineers. “The design is inspired by math, but the sculpture has to hold together and not fall apart,” he says with a laugh. “That’s where the engineering comes in.

“I hope when people view it they will be curious—about the angles, about how the shape changes from one orb to the next, from a geometric to an organic form,” he says. “The ultimate goal is to get people to think about math. The professor in me never sleeps.” 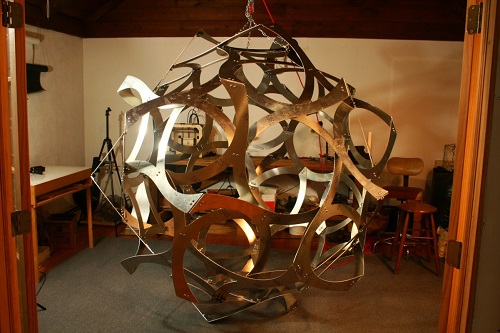