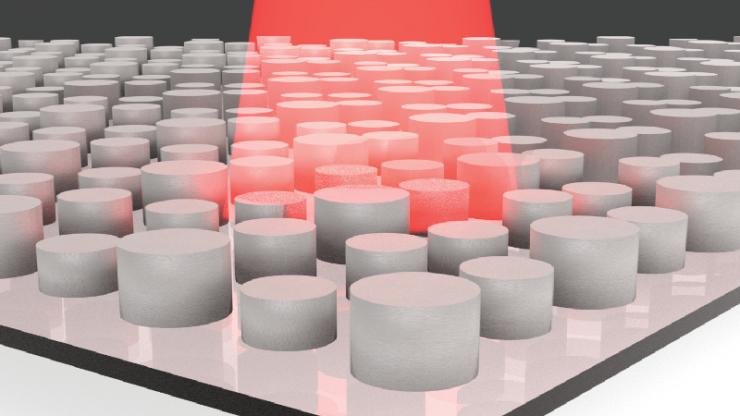 Electrical engineers at Duke University have harnessed the power of machine learning to design dielectric (non-metal) metamaterials that absorb and emit specific frequencies of terahertz radiation. The design technique changed what could have been more than 2000 years of calculation into 23 hours, clearing the way for the design of new, sustainable types of thermal energy harvesters and lighting.

The study was published online on September 16 in the journal Optics Express.

Metamaterials are synthetic materials composed of many individual engineered features, which together produce properties not found in nature through their structure rather than their chemistry. In this case, the terahertz metamaterial is built up from a two-by-two grid of silicon cylinders resembling a short, square Lego.

Adjusting the height, radius and spacing of each of the four cylinders changes the frequencies of light the metamaterial interacts with.

Calculating these interactions for an identical set of cylinders is a straightforward process that can be done by commercial software. But working out the inverse problem of which geometries will produce a desired set of properties is a much more difficult proposition.

Because each cylinder creates an electromagnetic field that extends beyond its physical boundaries, they interact with one another in an unpredictable, nonlinear way.

“If you try to build a desired response by combining the properties of each individual cylinder, you’re going to get a forest of peaks that is not simply a sum of their parts,” said Willie Padilla, professor of electrical and computer engineering at Duke. “It’s a huge geometrical parameter space and you’re completely blind -- there’s no indication of which way to go.”

One way to find the correct combination would be to simulate every possible geometry and choose the best result. But even for a simple dielectric metamaterial where each of the four cylinders can have only 13 different radii and heights, there are 815.7 million possible geometries. Even on the best computers available to the researchers, it would take more than 2,000 years to simulate them all.

Malof and Huang created a type of machine learning model called a neural network that can effectively perform simulations orders of magnitude faster than the original simulation software. The network takes 24 inputs -- the height, radius and radius-to-height ratio of each cylinder -- assigns random weights and biases throughout its calculations, and spits out a prediction of what the metamaterial’s frequency response spectrum will look like.

First, however, the neural network must be “trained” to make accurate predictions.

“The initial predictions won’t look anything like the actual correct answer,” said Malof. “But like a human, the network can gradually learn to make correct predictions by simply observing the commercial simulator. The network adjusts its weights and biases each time it makes a mistake and does this repeatedly until it produces the correct answer every time.”

To maximize the accuracy of the machine learning algorithm, the researchers trained it with 18,000 individual simulations of the metamaterial’s geometry. While this may sound like a large number, it actually represents just 0.0022 percent of all the possible configurations.  After training, the neural network can produce highly accurate predictions in just a fraction of a second.

Even with this success in hand, however, it still only solved the forward problem of producing the frequency response of a given geometry, which they could already do. To solve the inverse problem of matching a geometry to a given frequency response, the researchers returned to brute strength.

After that, a search algorithm could match any given desired frequency response to the library of possibilities created by the neural network.

“We’re not necessarily experts on that, but Google does it every day,” said Padilla. “A simple search tree algorithm can go through 40 million graphs per second.”

The researchers then tested their new system to make sure it worked. Nadell hand drew several frequency response graphs and asked the algorithm to pick the metamaterial setup that would best produce each one. He then ran the answers produced through the commercial simulation software to see if they matched up well. 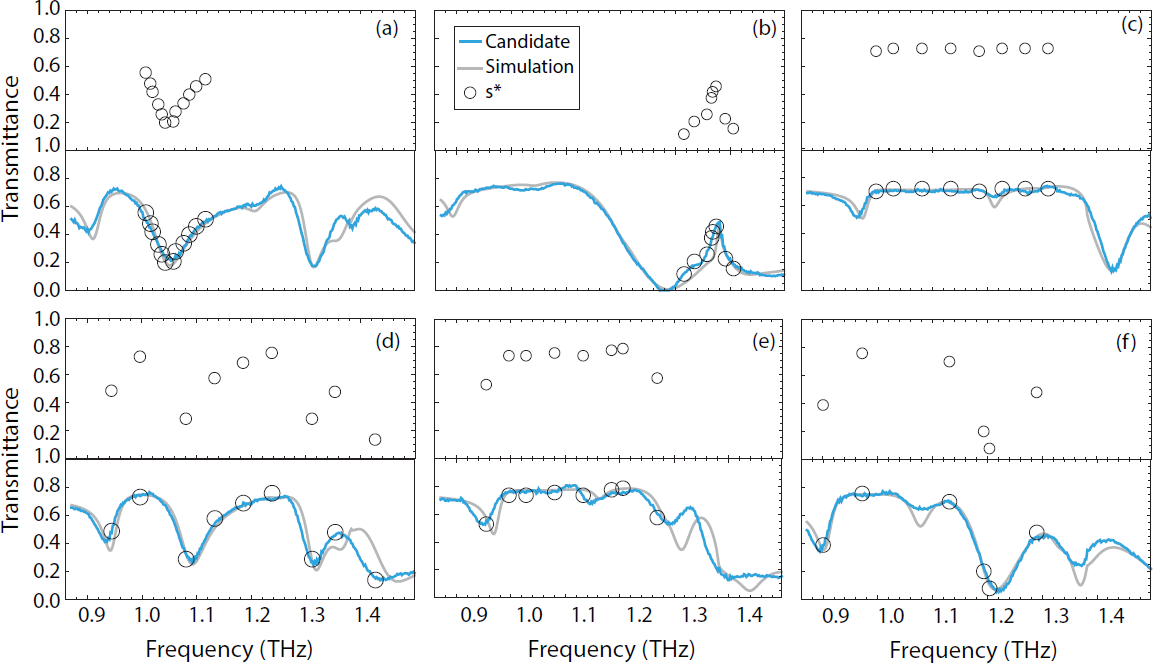 With the ability to design dielectric metamaterials in this way, Padilla and Nadell are working to engineer a new type of thermophotovoltaic device, which creates electricity from heat sources. Such devices work much like solar panels, except they absorb specific frequencies of infrared light instead of visible light.

“Metal-based metamaterials are much easier to tune to these frequencies, but when metal heats up to the temperatures required in these types of devices, they tend to melt,” said Padilla. “You need a dielectric metamaterial that can withstand the heat. And now that we have the machine learning piece, it looks like this is indeed achievable.”

This research was supported by the Department of Energy (DESC0014372).