Lucinda Camras has to wait only a little while longer before she’s able to put “Ph.D.” after her name, and when that time comes, those letters will follow several other impressive letters – CSO – as in chief scientific officer. 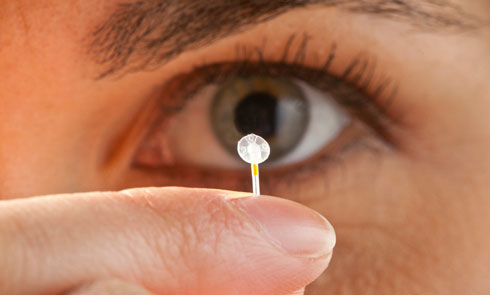 In her first year of graduate training at Duke, Lucinda had already formed a company based on the results of almost a decade of research into one of the most common causes of blindness, glaucoma.

“The major risk factor is increased pressure within the eye, which leads to optic nerve atrophy and irreversible vision loss.  The only proven treatment for glaucoma is to reduce eye pressure,” Lucinda said. “So we set out to invent a device that is better than any existing treatment to reveal eye pressure and save sight.”

The “we” refers to her father and world-famous ophthalmologist, Carl Camras, with whom she has worked on this project since her teens. Dr. Camras developed what is currently the leading drug in glaucoma therapy, Xalatan; however, he believed that their device would be even better.  When her father died in 2009, she continued the work on the device, dubbed the Camras Shunt, and re-incorporated as Camras Vision with her business partner and Fuqua alum, Roberto Alfaro.

The promise of this device has not escaped the greater research world. Lucinda just received her second Small Business Innovation Research award, giving her one each from the National Science Foundation and the National Institutes of Health -- an unprecedented achievement for such a young researcher.

Traditionally, glaucoma patients are started on drugs.  If medication does not adequately lower eye pressure, the next option is surgery. However, Lucinda said, surgeries are only about 60 percent effective and, if the patients are lucky, last five years or so.  Considering that glaucoma is a chronic disease, these surgical treatments usually won’t cut it (no pun intended), which leads to more surgeries and complications.

“Our device drains the fluid to a different place after surgery,” she explained. “It permits the fluid to bypass the unpredictability of wound healing in the traditional drainage site, which is the main reason for surgical failure. Additionally, our device is adjustable to accommodate treatment changes for the lifetime of the patient and implantation is done in a matter of minutes!”

Lucinda has been working on the Camras Shunt with Bruce Klitzman, professor of biomedical engineering, and Rand Allingham and Sanjay Asrani, glaucoma specialists in the Duke Eye Center.  She is working on an entirely separate topic for her Ph.D. work under biomedical engineering professor Fan Yuan, and is a member of Pratt’s Center for Biomolecular and Tissue Engineering (CBTE) program.

“The CBTE program promotes the balance between academics and industry and allowed me the flexibility to find my own path,” Camras said. “Drs. Yuan and Klitzman have supported and encouraged me to pursue my industry interests without losing sight of my Ph.D. work.”