From London with Machine Learning 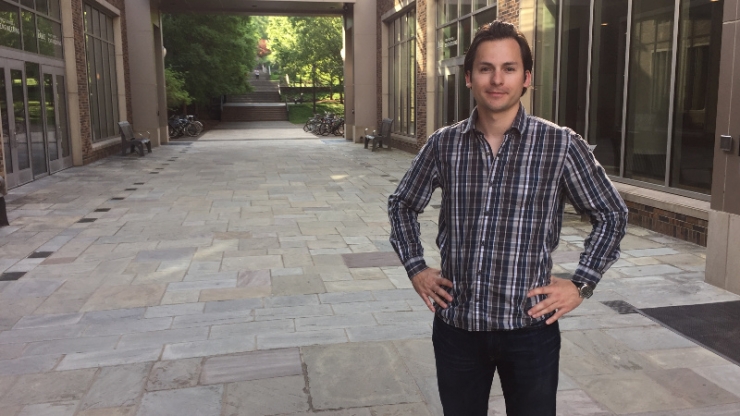 Computers are much better than humans at finding patterns and nuanced relationships in large datasets, but they’d probably be even better if the humans actually understood how they did it.

As it stands, machine learning algorithms are a “black box”: researchers know what goes in and what comes out, but not as much about how the inner workings of such programs affect their performance, such as the minimum number of training examples that can be provided while maintaining accuracy.

Sokolic is looking at the underlying mathematical fundamentals to try to discover why these programs work. Along the way, he’s investigating questions such as how researchers might be able to teach machine-learning programs to recognize objects from any vantage point—something they are not currently good at.

This question is especially important for facial recognition algorithms, such as those used by Guillermo Sapiro, the Edmund T. Pratt, Jr. School Professor of Electrical and Computer Engineering, and Sokolic’s advisor at Duke. Since September 2016, Jure Sokolic has been working with Sapiro and his research team to better understand how machine learning is being used in their research.

Born, raised and college-educated in Slovenia, Sokolic is currently working on a PhD at University College London, and has been expanding his research and perspectives in machine learning here in Durham as Duke University’s 2016-17 Vest Scholar.

“I applied to Duke because I knew my work aligns with the interests of professors here,” said Sokolic, who plans to return to London to defend his dissertation before pursuing a career in industry. “It’s been exciting because Professor Sapiro has a broad spectrum of work from theories to applications. I can learn a lot from him, not just about research, but about the implications of our research, such as concerns for people’s privacy when we use such methods.”

“Thanks to Jure’s presence, we are finding some very interesting support for deep learning theories that we could not find without him,” said Sapiro. “This Vest Scholarship has thereby been critical and will serve for a very long-term collaboration with University College London.”

“The Vest Scholarship is serving as an opportunity to strengthen current ties between UCL and Duke,” echoed Miguel Rodrigues, Sokolic’s advisor back in London. “The know-how acquired by Jure under the guidance of Professor Sapiro will be critical to expand new research directions within our group at UCL.”

Sokolic’s research is addressing the Grand Challenge of “Engineer the Tools of Scientific Discovery,” by delving into the fundamentals of how deep learning works. An emerging technique based on neural networks, deep learning is a type of machine learning where computers teach themselves to recognize patterns in data.

“The classic example is distinguishing between pictures of cats and dogs,” said Sokolic. “You can train a deep learning algorithm to do this by showing it many pictures and telling it which is which. The computer will then determine the parameters that distinguish cats from dogs on its own and will correctly predict the answer for future content automatically.”

Sapiro has several projects under way that use machine learning, including an app leveraging Apple’s ResearchKit that is exploring how mobile devices might be used to screen for autism in young children.

“I don’t work on those projects directly,” said Sokolic. “But I talk to the members of the lab and try to get ideas and think about the problems they are facing.”

Sokolic says the experience has been very worthwhile for him, and not just because of the generous Vest Scholar package that provides everything he needs for a full year studying in the United States.

“I think the biggest gain is being able to be actively involved with the Sapiro research group and with other researchers at the Information Initiative at Duke,” said Sokolic. “This allows us to exchange ideas and explore problems on a daily basis. It has given me an additional perspective on my work, which I will be able to bring back to my colleagues in London.”