Technology moves at a breakneck pace, with advances that make the mind spin. Duke University is keeping in step with this technological revolution, but in ways that might surprise the casual observer. For example, one intrepid group of researchers led by Krishnendu Chakrabarty, PhD, and Richard Fair, PhD, have expanded the realm of electrical engineering into the biological world with the research and development of microfluidic biochips.

These “lab-on-a-chip” devices can actually “learn how to test for specific analytes through a decision-tree architecture,” according to Fair, one of the team’s lead researchers. They also have the ability to “electrically control the transport and processing of ‘biochemical payload’ in the form of droplets by applying discrete voltages to transport lines.” The team has taken advantage of this unique mechanism to develop software to control the chips’ activity. 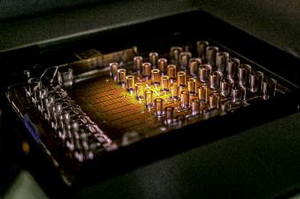 What exactly does this mean? According to Chakrabarty’s 2010 paper “Digital Microfluidic Biochips: A Vision for Functional Diversity and More than Moore,” their technological innovation enables “the convergence of electronics with the life sciences,” allowing for more precise forms of measurement, diagnostics and electronic integration with biological forms. The chips, “compared to conventional laboratory procedures … offer the advantages of higher sensitivity, lower cost … system integration and less likelihood of human error.”  When dealing with biological payloads that could facilitate the discovery of new drugs or the diagnosis of biological problems, this low-cost, low-error device offers a world of possibilities.

The practical applications of these discoveries and demonstrations are “numerous,” as Fair puts it. Not only can these biochips learn to test an unknown molecule, which would be a major benefit to a scientific community looking to analyze and discover materials on the molecular level, but the team has a “target application [that is] rapid detection of bacterial infections in blood.”

The fact that these chips can perform molecular testing for analysis and diagnosis is very important in the current landscape of the scientific community, given the costs and work required to obtain molecular diagnostic data. Fair estimated that “90 percent of the cost and 95 percent of the time needed to obtain [the diagnostic data] today is sample preparation, including collection and transportation.” These “lab-on-a-chip” biochips would drastically cut down those costs. With a faster, more efficient method of collecting diagnostic data on a molecular level comes new possibilities for everything from drug synthesis to bacterial diagnostics, blood composition analysis to biological culture analysis.

It can be a bit mind-numbing to think of all the potential outcomes from this line of research. A microchip that integrates the electrical and biological, with the ability to learn, diagnose and analyze right at the site of interest, truly seems something left to the pages of an author’s futuristic novel. However, all of this and more is currently under research and development right within the walls of Duke University. That doesn’t mean, however, that the research will be contained to Duke’s labs. When asked about future plans the team has for their invention, Fair asserted that the team “would like to put a programmable/adaptive microfluidic platform in the hands of [other] researchers. This way we all learn more about applications for an adaptive lab-on-a-chip.”  With a more widespread scope for research, the potential for these chips seems truly endless; what began in a lab at Duke University could one day become a standard analysis device in labs and hospitals around the world.

Dennis Lynch is a sophomore pursuing majors in computer science and electrical and computer engineering.