Kris Hauser, an expert in computer science, informatics and robotics, joined both the electrical and computer engineering department and the mechanical engineering and materials science department in Duke University’s Pratt School of Engineering on August 3, 2014. Part of a steadily expanding robotics group on campus, he focuses on the planning and control of autonomous robots.

To make a humanoid robot smart enough to navigate a home or in outdoor terrain, for example, it needs software that has both planning and control. Planning refers to the long-term forward thinking required to navigate a course; control refers to very fast adjustments made in response to changes in the environment, much like reflexes. Both are imperative for the future success of robotics and writing successful software will take a multitude of talented individuals. 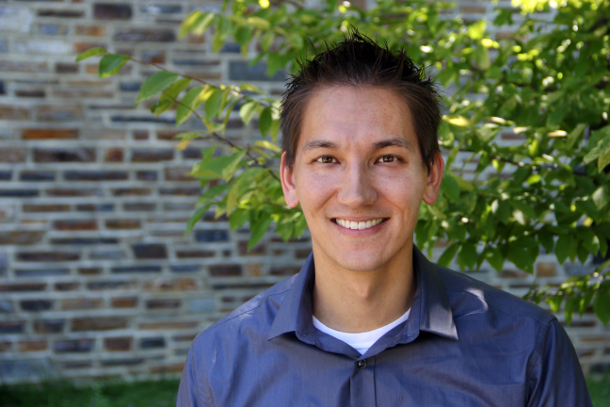 “Robotics is an exciting and interdisciplinary field,” said Hauser, who joins Duke’s faculty from Indiana University. “I came to Duke because I felt like the potential for collaborations from different fields is almost endless. At least 10 people immediately come to mind who I could collaborate with very closely.”

Hauser’s research is exemplified by a recent DARPA challenge he participated in. As part of a $60 million project to develop robots that can replace human workers in dangerous disaster scenarios, Hauser helped design a small humanoid robot for the ladder climbing event. The first trial last December saw the robot successfully navigate eight of the nine steps, ahead of any other American team.

Besides building robots that can navigate rough terrain, Hauser is also interested in intelligent vehicles, like the Google car that can navigate streets on its own. He is also trying to introduce more intelligence into human-controlled robots. For example, medical robots controlled by surgeons require dozens or hundreds of hours of training to operate. Any software that could level out this steep learning curve would be a valuable advancement.

“I’d also love to start a project to build a rock-climbing robot,” said Hauser, who recently took up the hobby in his free time. Laughing, he adds, “I’m also an experienced skier, but I don’t see a lot of opportunities to start up a skiing robot project in eastern North Carolina.”

Hauser has spent most of his life in California, where the nearby Sierra Nevadas presented more skiing opportunities. After growing up in Los Angeles, he earned dual undergraduate degrees in computer science and mathematics from UC Berkeley and a PhD in computer science from Stanford University. He then returned to UC Berkeley as a postdoctoral fellow in robotic automation until 2009, when he joined the faculty at Indiana University.

Since Indiana does not have an engineering department, however, Hauser found himself looking for new opportunities. At Duke, he joins a growing trend of engineering faculty hired within the past two years with expertise in robotics.

“It’s shaping up to be a nice group that I think will be very exciting in the future,” said Hauser. “We’re hoping to build Duke Robotics into an internationally recognized brand.”