The Key to Sustainability: Flows of Water and Electricity

Adrian Bejan, the J.A. Jones Professor of Mechanical Engineering at Duke University, presented one of the keynote lectures at the annual conference of the Academy of Europe on Wednesday, September 9, 2015. Titled “The Human & Machine Species: Life and Evolution as Physics,” the lecture focused on the topic of a paper Bejan published Tuesday, September 22, 2015, in the European Review—sustainability as seen by the constructal law. 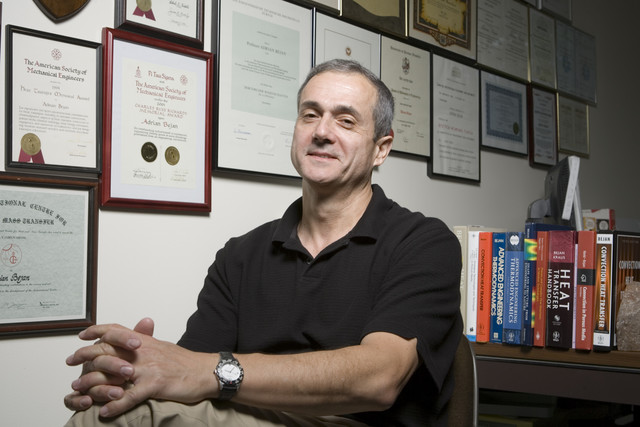 In 1996, Bejan penned the Constructal Law that postulates that movement—or “flow”— systems such as trees, rivers or air currents evolve into configurations that provide easier and easier access to flows. Now internationally recognized as the physics law of organization and evolution, the constructal law is increasingly finding applications in improving design and maximizing efficiency of manmade systems.

In terms of sustainability, Bejan argues that physics reveals that the most important of these flows is water and electricity.

“There is plenty of water in a swamp and plenty of solar energy falling on the Sahara,” said Bejan. “But neither is precious because neither is flowing through the space inhabited by human life.”

To achieve a sustainable “flowing” future, Bejan argues that the underdeveloped areas and groups of the world must be better connected to flows of water and electricity. But that doesn’t mean they need independent access to said resources.

These flows won’t happen unless they are attached to the trunks and big branches of the global economy—so that they become branches that are part of the same tree, instead of entirely separate systems. This, he argues, indicates that a socioeconomic hierarchy isn’t only unavoidable, it is necessary.

“There is a fallacy where people think that equality is the recipe for advancement and sustainability,” said Bejan. “Hierarchy is natural and beneficial to all, and it is often falsely confused with inequality.”

However, Bejan also warns that the gap between the developed and underdeveloped needs to be controlled. And the best way to do this is to connect the have-nots of the world with flowing electricity and water. The end result is a global design that is efficient, stable and beneficial to all its parts.

In other words, a design that is sustainable.

Bejan’s lecture took place at 9:00 AM on Wednesday, September 9, at the 27th annual conference of the European Academy held in Darmstadt, Germany. His paper, “Sustainability: The Water and Energy Problem, and the Natural Design Solution,” appears in the European Review.