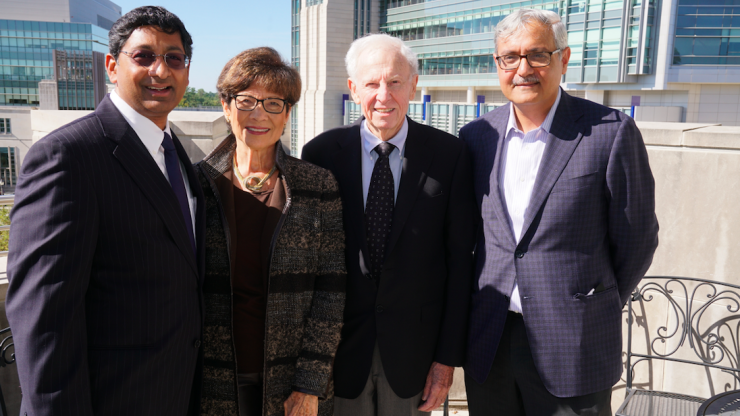 A single road separates Duke University’s Pratt School of Engineering from the ever-growing Duke University Medical Center, and according to Google Maps, the walk between the two locations typically takes less than eight minutes. Duke engineers and physicians have long capitalized on this proximity, pursuing collaborative research on topics including cardiology, medical device design and even cancer research.

But in 2017, a generous gift from the late Duke Engineering alumnus Alan L. Kaganov, E’60, MBA, MS, ScD and his wife, Carol, provided support for physician-engineer teams to pursue a new avenue of research projects––specifically those involving the diagnosis, treatment and outcomes of lung diseases.

Launched in Fall 2017, the Kaganov Research Initiative supported collaborations targeting lung diseases, with a particular focus on pulmonary fibrosis, which affects more than 100,000 people in the United States each year. Pulmonary fibrosis occurs when lung tissue becomes injured; as the damage increases the lungs become scarred and stiff, making it harder for patients to breathe. There is currently no cure for pulmonary fibrosis, and physicians often have difficulty identifying the underlying cause of the illness. In these cases, the disease is labeled idiopathic pulmonary fibrosis.

Since the initiative’s launch, it has supported numerous research projects, including two led by Brent Hoffman, an assistant professor in biomedical engineering, and Dr. Scott Palmer, a professor and vice chair for research in the Department of Medicine.

A pioneer in the new field of mechanobiology, Hoffman studies how physical forces affect cell behavior, while Dr. Palmer is an expert in fibrosis and transplant research. Combining their respective knowledge, their first project involved the development of sensors that glow in response to mechanical forces, allowing the measurement the force on cells in a model airway. Their second project used similar sensors to explore the effects of the chemical diacetyl, which triggers the generation of specific molecules, called DAMPs, on cell contractility. These DAMPs, or damage-associated molecular patterns, are commonly seen in airway diseases like fibrosis.

“It has been a pleasure to collaborate with Brent and bring his expertise in biophysical chemistry and engineering background to bear on the problem of lung fibrosis,” said Palmer. “Together we are growing the understanding of how cell activation by biological mediators and mechanical forces works synergistically to drive the development of lung fibrosis.”

“Dr. Palmer and I had not met before the Kaganov Initiative, but the program really catalyzed us into bringing together our two very disparate areas of expertise,” said Hoffman. “That led to the generation of these exciting new ideas about the mechanics behind the disease and how fibrosis works, and I don’t think that would have happened without the impetus of the Kaganov grant.”

“The Kaganov gift has been very successful at initiating new collaborations between faculty in the Schools of Engineering and Medicine,” said George Truskey, senior associate dean in the Pratt School of Engineering and the Goodson Professor of Biomedical Engineering. “Prior to this gift there were few interactions with pulmonary medicine. Now we have a number of faculty taking some exciting approaches to treat pulmonary diseases, particularly idiopathic pulmonary fibrosis.”

“Dr. and Mrs. Kaganov’s gift was very thoughtful. Not only has the gift enabled new research collaborations, it has also allowed us to hold events that build awareness of the unmet needs in pulmonary medicine,” said Donna Crenshaw, executive director of Duke MEDx, an initiative to enhance the ties between engineering and medicine. “These events – symposia, and seminars by visiting speakers – also grow the research community at the intersection of pulmonary medicine and engineering by creating opportunities for students, staff and faculty from the different disciplines to meet and share ideas.”

Supported by a $1 million endowment, the Kaganov BioDesign Fellowship partners undergraduates in Duke Engineering with clinicians in the School of Medicine to design biomedical tools that can address issues with respiratory function, disease diagnosis and treatment.

“Thanks to Alan and Carol’s support, our students have a chance to develop solutions to real clinician-derived problems, which increases their awareness of health care issues in the field and creates a pipeline of future leaders in biomedical engineering design,” said Ravi Bellamkonda, Vinik Dean of the Pratt School of Engineering.

“The gift from the Kaganov family was innovative in its focus and has already led to great insights into engineering solutions to greater discovery of the biology of pulmonary disease as well as opportunities for improved diagnostics for idiopathic pulmonary fibrosis, a particular interest of Dr. Kaganov,” said Dr. Geoff Ginsburg, the director of Duke MEDx. “We are grateful for the opportunity it has provided for MEDx to support the deep exploration of lung diseases and believe this is an important paradigm to catalyze new ideas for investigation between Duke Engineering and Duke School of Medicine.”

The Kaganovs have a record of generosity to Duke Engineering, with previous gifts that include an endowed professorship in engineering currently held by Duke BME Chair Ashutosh Chilkoti, a scholarship that offers more than $300,000 in support for nearly 20 BME undergraduates over the last twenty years, and a conference room in the Fitzpatrick Center for Interdisciplinary Engineering, Medicine and Applied Sciences, as well as continued support through the Engineering Annual Fund.

Dr. Kaganov passed away at the age of 80 on February 2, 2019 after a long battle with pulmonary fibrosis. Over the course of his career, Kaganov helped develop treatments for conditions including heart, peripheral vasculature, spine and urologic disease, and he was granted 15 US patents. In addition to his role as a successful venture capitalist in health care for two decades, Kaganov worked as a project engineer, research and development director, CEO and board chairman. He served on Pratt School of Engineering’s Board of Visitors, and he was named a Distinguished Alumnus in 2005.