Joel Greenberg has been named an assistant research professor in Duke’s  Department of Electrical and computer Engineering. As a former research scientist in the department and member of the Duke Imaging and Spectroscopy Program (DISP), he will continue leading a project he has been working on since 2012—developing new ways to use x-rays to peer inside suitcases. 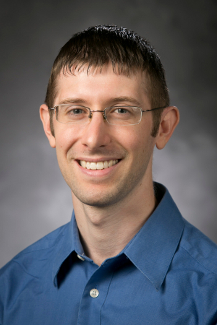 In a traditional x-ray imaging device, the machine records x-rays that pass by the object being scanned and actively tries to ignore the background noise of ricocheting rays. Those scattered x-rays, however, contain valuable data.

“You can get chemical and molecular information about an object from x-rays bouncing off of it,” says Greenberg. “You can even spot explosive materials that would look benign on a traditional x-ray scanner.”

Greenberg has been at Duke for the past 10 years, earning his PhD in physics in 2012. His thesis focused on the collective behavior of a super-cooled cloud of atoms excited by lasers. While quantum physics may seem like a far cry from x-ray spectroscopy, Greenberg says both require finding the best way to make accurate measurements informed by the physics involved.

“I enjoy the challenge of working on a project with a short-term, real-world application as a goal,” said Greenberg. “But I still like projects that start with writing down fundamental equations.”

The applications Greenberg is working on aren’t limited to the airport—he’s also taking his x-ray imaging research into the medical sector. The same scattered x-rays that can carry chemical composition information about explosives could also spot cancerous tissues. Greenberg is working on technologies that could assess the margins of tumors during surgery, noninvasively diagnose a tumor or check up on a treatment’s progress.

Whether in the airport or in the clinic, Greenberg is happy to be pursuing prototypes rather than just proof of concepts. And he’s happy to still be pursuing them at Duke.

“I had several offers from industry as well,” says Greenberg. “But I found private companies’ research to be too far from basic science. Plus, I get the opportunity to teach classes in engineering and a lot of work with project management. It’s a great mix, and Duke has been really good to me.”