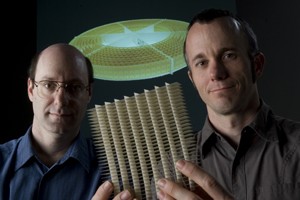 Two researchers at Duke University's Pratt School of Engineering have been named to the "Scientific American 50" for their work on developing an "invisibility cloak."

Compiled by Scientific American magazine, the roster of leaders in research, business and public policy appeared in the December 2006 issue, which hit newsstands on Nov. 21. The complete list of honorees is also available online.

"I am thrilled that our group has been chosen to be part of Scientific American's group of fifty," Smith said. "Our invisibility cloak has helped illustrate in a spectacular manner what is possible using artificially engineered materials. I expect that there will be many more remarkable demonstrations to come."

"I never expected to be so honored for hiding something," Schurig added.

The Duke team, along with Sir John Pendry of Imperial College London, reported the first demonstration of a working invisibility cloak in October in Science Express, the advance online publication of the journal Science. Fabricated from advanced "metamaterials," the cloak deflects microwave beams so they flow with little distortion around a copper cylinder "hidden" inside, making it appear almost as if nothing were there at all.

Metamaterials are artificial composites that can be made to interact with electromagnetic waves in ways that natural materials cannot reproduce.

The team produced the cloak according to electromagnetic specifications determined by a new design theory proposed by Pendry in collaboration with the Duke scientists. The team reported its theoretical work in Science earlier this year, alongside another report on invisibility theory by Ulf Leonhardt of the University of St. Andrews, in Scotland.

Both Pendry and Leonhardt also were named to the Scientific American 50.

"The Scientific American 50 pays tribute to individuals and organizations who, through their efforts in research, business and policy-making, are driving advances in science and technology that lay the groundwork for a better future," the magazine's editor-in-chief, John Rennie, said in an advance announcement. "Not only does our list honor these prime movers, it shines a spotlight on the critical fields that are benefiting from their achievements."