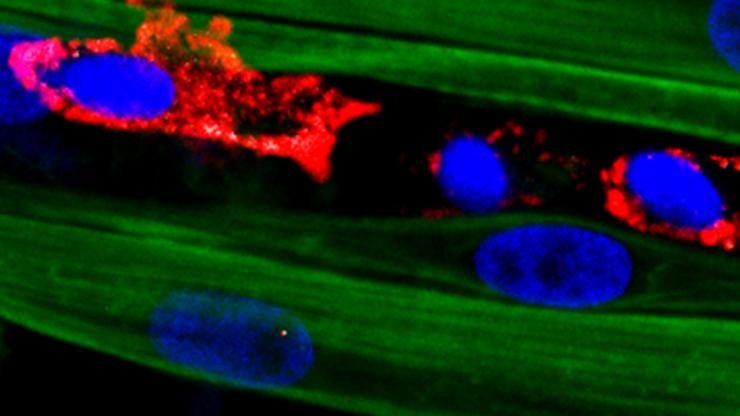 Biomedical engineers at Duke University have found a critical component for growing self-healing muscle tissues from adult muscle—the immune system. The discovery in mice is expected to play an important role in studying degenerative muscle diseases and enhancing the survival of engineered tissue grafts in future cell therapy applications.

In 2014, the group led by Nenad Bursac, professor of biomedical engineering at Duke, debuted the world’s first self-healing, lab-grown skeletal muscle. It contracted powerfully, integrated into mice quickly and demonstrated the ability to heal itself both inside the laboratory and inside an animal.

The milestone was achieved by taking samples of muscle from rats just two days old, removing the cells, and “planting” them into a lab-made environment perfectly tailored to help them grow. Besides a three-dimensional scaffolding and plenty of nutrients, this environment supported the formation of niches for muscle stem cells, known as satellite cells, that activate upon injury and aid the regeneration process.

For potential applications with human cells, however, muscle samples would be mostly taken from adult donors rather than newborns. Many degenerative muscle diseases do not appear until adulthood, and growing the muscle in the lab to test drug responses for these patients would benefit from the use of the patient’s own adult cells.

There’s just one problem—lab-made adult muscle tissues do not have the same regenerative potential as newborn tissue.

“I spent a year exploring methods to engineer muscle tissues from adult rat samples that would self-heal after injury,” said Mark Juhas, a former Duke doctoral student in Bursac’s lab who led both the original and new research.

“Adding various drugs and growth factors known to help muscle repair had little effect, so I started to consider adding a supporting cell population that could react to injury and stimulate muscle regeneration,” said Juhas. “That’s how I came up with macrophages, immune cells required for muscle’s ability to self-repair in our bodies.”

Macrophages are a type of white blood cell in the body’s immune system. Literally translated from Greek as “big eaters,” macrophages engulf and digest cellular debris, pathogens and anything else they don’t think should be hanging around while also secreting factors that support tissue survival and repair.

After a muscle injury, one class of macrophages shows up on the scene to clear the wreckage left behind, increase inflammation and stimulate other parts of the immune system. One of the cells they recruit is a second kind of macrophage, dubbed M2, that decreases inflammation and encourages tissue repair. While these anti-inflammatory macrophages had been used in muscle-healing therapies before, they had never been integrated into a platform aimed at growing complex muscle tissues outside of the body.

It took several additional months of work for Juhas to figure out how to incorporate macrophages into the system. But once he did, the results changed dramatically. Not only did the new muscle tissues perform better in the laboratory, they performed better when grafted into live mice.

“When we damaged the adult-derived engineered muscle with a toxin, we saw no functional recovery and muscle fibers would not build back,” said Bursac, who is a co-director of Duke’s Regeneration Next initiative. “But after we added the macrophages in the muscle, we had a wow moment. The muscle grew back over 15 days and contracted almost like it did before injury. It was really remarkable.”

The success appears to stem primarily from macrophages acting to protect damaged muscle cells from apoptosis—programmed cell death. While newborn muscle cells naturally resist the urge to throw in the towel, adult muscle cells need the macrophages to help them push through initial damage without going into cell death. These surviving muscle fibers then provide a “scaffold” for muscle stem cells to latch onto to perform their regenerative duties.

Bursac believes the discovery may lead to a new line of research for potential regenerative therapies. According to a popular theory, fetal and newborn tissues are much better at healing than adult tissues at least in part because of an initial supply of tissue-resident macrophages that are similar to M2 macrophages. As individuals age, this original macrophage supply is replaced by less regenerative and more inflammatory macrophages coming from bone marrow and blood.

“We believe that the macrophages in our engineered muscle system may behave more like the muscle-resident macrophages people are born with,” said Bursac. “We are currently working to understand if this is indeed the case. One could then envision ‘training’ macrophages to be better healers in a system like ours or augmenting them by genetic modifications and then implanting them into damaged sites in patients.”

That work is, of course, still years into the future. While this study also showed that human macrophages support the healing of lab-grown rat muscle, and separate work in Bursac’s group has grown complex human muscles containing macrophages, there is not yet a good lab or animal system to test the regenerative powers that this approach may have in humans.

“Building a platform to test these results in engineered human tissues is a clear next step,” said Bursac. “Along the same lines, we want to better understand the potential roles that macrophages within engineered muscle play in its vascularization and innervation after implantation. We hope that our approach of supplementing lab-grown muscles with immune system cells will prove to be a general strategy to augment survival and function of other lab-grown tissues in future regeneration therapies.”

This research was supported by the National Science Foundation and the National Institute of Arthritis and Musculoskeletal and Skin Diseases (AR070543, AR065873).