For more insights on the IIT Gandhinagar/Duke partnership, visit this post on Duke's research blog penned by Laura Brinn of Duke Global Communications, who was also on the trip, as well as her post on the next-generation toilet designed by RTI International and Duke to help stop global sanitation problems.

In January 2016, a contingent from Duke University visited the Indian Institute of Technology at Gandhinagar (IITGN) for a week of partnership and capacity building events. The partnership is a result of a Joint Declaration of Intent, signed by the U.S. and Indian governments in January 2015, to deepen higher education collaboration. 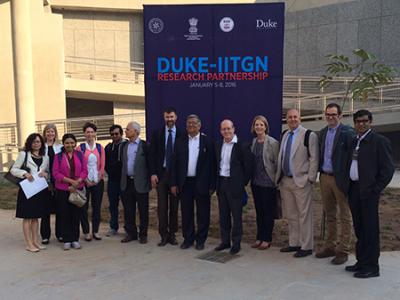 With funding support from the U.S. Agency for International Development (USAID), Duke University was selected by IITGN to receive initial support under the agreement. The two schools immediately found common ground for collaborative research, student exchanges, and joint engagement of private sector partners.

Highlighting the strategic importance of the partnership for Duke University, Larry Carin, Duke’s vice provost for research and delegation lead, said, “India is a special place for Duke, as seen in the number of students and alumni we have from India, the research collaborations our faculty have there, and our institutional partnerships across India. We are privileged to work with USAID and RTI International – our longstanding partner in North Carolina – on this initiative with IITGN.”

From January 5-8, a 15-member contingent from Duke and RTI will work with IITGN faculty and staff to develop new research projects, improve IITGN capacity in critical areas, and discuss potential industry partnerships.

Pratt School of Engineering faculty members Michael Bergin of civil & environmental engineering and Krishnendu Chakrabarty and Kishor Trivedi of electrical & computer engineering were among the Duke faculty representatives, while ECE PhD student and IITGN alumna Aditi Dighe returned to her alma mater to speak with current students about her experiences studying at the two partner schools.

The week’s events were made open to other IITs through simulcast on the IIT-wide video network.

Speaking on the support being extended by USAID, Kathryn D. Stevens, acting mission director, USAID/India, noted: “USAID and the IITs have a long history of partnership. After supporting India in establishing IIT-Kanpur in 1960s, the governments of both U.S. and India are once again collaborating to build IIT-Gandhinagar into a center of excellence for science and technology. The power of youth, technology and innovation is defining the U.S.-India relationship and igniting a partnership that will advance and sustain prosperity in our two countries.”

IIT Gandhinagar: The Indian Institute of Technology Gandhinagar, deemed an institute of national importance by an Act of the Indian Parliament, strives to offer the best undergraduate engineering education in India with unmatched innovations in curriculum. The institute promotes critical thinking and an appreciation of the interdisciplinary character of knowledge, with an emphasis on the liberal arts, project oriented learning, compulsory courses in design and the life sciences, diversity and globalization. Its five-week immersion Foundation Programme for all new undergraduate students was recognized with the World Education Award 2013 by the World Education Summit for innovations in engineering education. Nearly a quarter of its undergraduate students receive study abroad experience during their academic career.

Duke University: Younger than most other prestigious U.S. research universities, Duke University consistently ranks among the very best. Duke’s graduate and professional schools — in business, divinity, engineering, the environment, law, medicine, nursing and public policy — are among the leaders in their fields. Duke’s home campus is situated on nearly 9,000 acres in Durham, North Carolina, a city of more than 200,000 people. Duke also is active internationally through the Duke-NUS Medical School in Singapore, Duke Kunshan University in China and numerous research and education programs across the globe. More than 75 percent of Duke students pursue service-learning opportunities in Durham and around the world through DukeEngage and other programs that advance the university’s mission of “knowledge in service to society.”

USAID/India: The United States Agency for International Development (USAID) works to end extreme poverty and promote resilient, democratic societies. USAID is an independent government agency that provides economic, development, and humanitarian assistance around the world in support of the foreign policy goals of the United States. Leveraging India’s growing financial and human resources, USAID is harnessing the strengths and capabilities of both countries to tackle development challenges not only in India, but worldwide. This approach to development capitalizes on the expertise, innovations, and resources of the United States and India to tackle the most pressing challenges of our day, from infectious diseases to food security and climate change. USAID partners with India to address these and other issues through the U.S. Government’s Feed the Future, Global Health, and Global Climate Change initiatives. In all sectors, USAID builds private sector partnerships to foster in-country sustainability and ownership, with a focus on health, urban water and sanitation, food security, climate change, early grade reading, and women’s empowerment as a cross-cutting issue.

RTI International: RTI International is one of the world’s leading research institutes, dedicated to improving the human condition by turning knowledge into practice. Its staff of more than 3,700 provides research and technical services to governments and businesses in more than 75 countries in the areas of health and pharmaceuticals, education and training, surveys and statistics, advanced technology, international development, economic and social policy, energy and the environment, and laboratory testing and chemical analysis.