Students and clinicians collaborated to design a newly-patented tool that makes it easier, and more comfortable, for physicians to use endoscopes 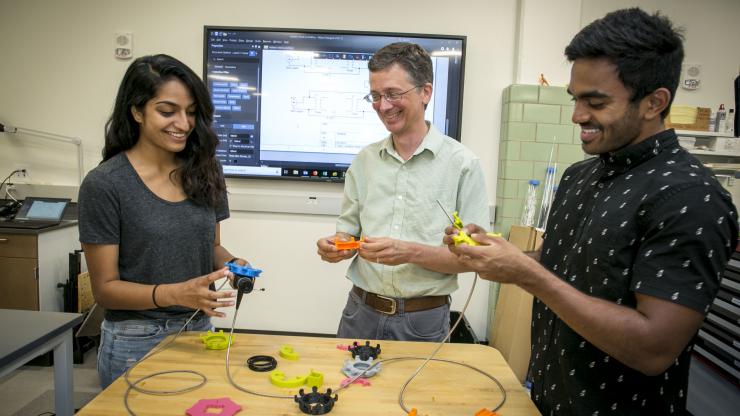 This story was written by Alexis Kessenich and originally published on the Duke MEDx site.

On a chilly December evening in Durham guests arrived at The Restaurant at The Durham Hotel with a hunger for food and innovation. Seated around a U-shaped table, gastroenterology and engineering professionals brainstormed engineering solutions to medical problems. What started as a small working dinner hosted by MEDx quickly took on a life of its own.

With empty plates and full minds, guests left The Durham eager to put their ideas to work. Attendees formed countless connections and projects that originated at The Durham continue to flourish. One in particular, a Duke-patented and licensed ergonomic improvement for endoscopes, embodies the collaborations MEDx was created to foster.

The idea for the dinner began when Andrew Muir, M.D., chief of gastroenterology, approached Geoff Ginsburg, M.D., Ph.D., director of MEDx, for advice on how to develop collaborations between his department and the Pratt School of Engineering. Ginsburg proposed that MEDx host a dinner for faculty in each department. “One of my major goals has been to connect my people with the amazing faculty and programs at Duke,” said Muir. “This connecting is the spirit of MEDx.” Muir invited his faculty to submit ideas to improve the medical field, and Donna Crenshaw, Ph.D., executive director of MEDx, invited engineering faculty that had expertise in those areas.

A member of Muir’s team, gastroenterologist Darin Dufault, proposed improving the device used during endoscopies. During an endoscopy, a tool called an endoscope is used to examine a patient’s digestive tract. Articulating dials located on the handle of the endoscope are used to control its position during procedures. With these dials, the operator moves the tip of the endoscope up, down, left or right with one hand. But this design imposes significant physical stress on the operator, including pain, discomfort and stress-induced injuries. The handles also impose ergonomic challenges as they are not designed to adapt to varying hand sizes and grip strengths.

Dufault arrived to the MEDx dinner with an idea for a new device that would address these limitations. Over dinner, he formed a connection with Mark Palmeri, a professor of the practice of biomedical engineering, who felt he could help bring Dufault’s idea to life. Palmeri then introduced Dufault to a team of engineering graduate students to help.

“An ergonomics-based project appealed to me because we had never really done that before.” said Palmeri, “Dufault brought in anecdotal experience in how the ergonomics of their equipment is subpar, but since there’s nothing else out there to use, you are at the mercy of it.” Dufault and the team of students advised by Palmeri experimented with around 100 different iterations over the course of several months before finally settling on a design.

The winning device, a tool that snaps on to the dials of an endoscope, addresses the current limitations with customizable attachments and extensions for the articulating dials that are compatible with standard endoscopes. “The device has two purposes,” says Dufault. “First, it reduces the reach necessary to manipulate the ‘little’ dial – the one that moves the scope from left to right – making it easier for people with smaller hands and reducing strain on the hand for all users. Secondly, it increased the radius of the ‘little’ dial, which further reduces the strain necessary to manipulate the ‘little’ dial.”

Duke patented the group's device, and the patent has been licensed by a venture capital company, OBX Associates, which focuses on specialized mobile devices. Plans are already underway to begin manufacturing and distribution in the U.S. and abroad.

For Dufault and Palmeri, the collaboration won’t stop here. The pair already has plans to meet and discuss new and innovative ideas.

“Through these types of collaborations, engineers are brought problems they may otherwise not know about,” says Dufault, “and clinicians can contribute to the solution in ways that would not be possible without engineers.”

Palmeri hopes that as Duke’s design classes keep growing, medical and engineering professionals will come together regularly to figure out what’s ripe for the picking to tackle in these classes. “By getting wins like this one,” he says, “clinicians get even more excited about engaging with us. MEDx serves as a really great icebreaker for us to do so.”

“The human connection of meeting face-to-face at dinners like this one is important,” says Dufault. “No doubt in my mind it fosters collaboration and interest in working together.”

Palmeri says he appreciates that the MEDx dinner brought together junior- and senior-level people in each department to the same environment. “Young faculty are typically not folks we get the opportunity to collaborate with on projects, but this allowed us to see really neat or new ideas from the enthusiastic, young clinical faculty.”

MEDx hopes to host more dinners like this in the future. “There is so much latent potential at Duke for these types of collaborations to happen,” said Ginsburg, “which is why MEDx can be so strategic at turning a small investment on our end into potentially revolutionary designs – a small investment can result in a huge impact.”

If you are interested in having a collaborative event with members from your department and the adjacent school, contact MEDx.