The HTC Vive, a 360 degree room-size virtual reality experience created by Steam and HTC, offered demos on the Duke campus.

“I just threw eggs at the robot!” grad student 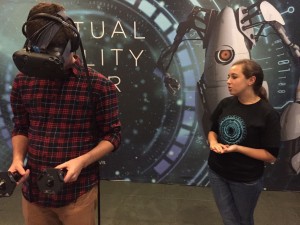 “He just said, ‘Thank you for the egg, human. Give me another one.’ It was really fun.”

In what world does one throw eggs at grateful robots? In the virtual world of the HTC Vive, a 360 degree room-size virtual reality experience created by Steam and HTC that is now offering demos on the Duke campus from November 9 – 13. There is a noticeable buzz about Vive throughout campus.

I stepped in to the atrium of Fitzpatrick CIEMAS expecting a straightforward demonstration of how to pick up objects and look around in virtual reality. Instead, I found myself standing on the bow of a realistic ship, face to face with a full-size blue whale.

Peering over the side of the shipwreck into a deep ravine, I seriously pondered what would happen if I jumped over the railing –even though both my feet were planted firmly on the ground of CIEMAS.

Armentrout observed that the Vive differentiates itself from other VR devices like Oculus by allowing a full range of motion of the head: “I could actually bend down and look at the floorboards of the ship.”

In Valve’s Aperture Science demo, based on their game Portal, I attempted to repair a broken robot so real it was terrifying. I was nearly blown to bits by my robot overseer when I failed at my task. In total, I progressed through four modules, including the shipwreck, robot repair, a cooking lesson, and Tiltbrush, a three-dimensional drawing experience.

Game developers naturally are pursuing in virtual reality, but technologies like HTC Vive have implications far beyond the gaming realm. One of the applications of the Vive, explained one of the Vive representatives, could be virtual surgeries in medical schools. Medical schools could conserve cadavers by assigning medical students to learn operations on virtual bodies instead of human bodies. The virtual bodies would ideally provide the same experience as the operating room itself, revolutionizing the teaching of hands-on surgical skills.

The first time I tried the HTC Vive was not at Duke; it was at a Tiltbrush art show in San Francisco.

On the stage, an artist was moving her limbs in grand arcs as she painted the leaves of trees and brushing the ground to create a sparkling river. A large screen projected her virtual 3-D masterpiece for the audience. 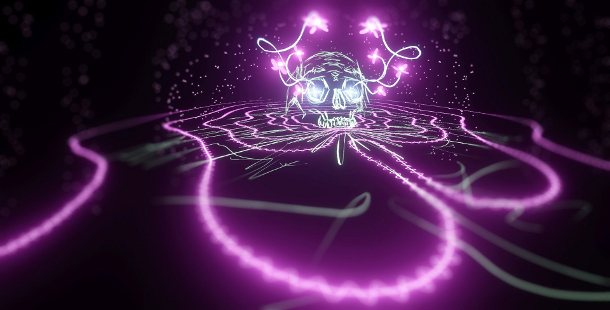 Gilded frames on stands emphasized the interactive Vive devices, each of which housed a Tiltbrush masterpiece created by a local artist trained in the technique. Well-dressed attendees marvelled at seemingly invisible waterfalls and starry skies in the virtual reality paintings. Clearly, the Vive, by opening another dimension of artistic creation, is changing our notions of space and pushing the bounds of creativity.