A Highway Without Speed Limits

Duke engineers believe they can lead a revolution in materials science

“The invention of silicon circuits and lithium-ion batteries made computers and iPods and iPads possible, but it took years to get those technologies from the drawing board to the marketplace—we can do it faster.”

As he saw it, the work he had started more than ten years earlier would now grab the attention, and the support, of the public and politicians in Washington. That support, in turn, would help stimulate the creation of the vast computational infrastructure necessary to create the next generation of materials out of which to build the latest technologies.

Curtarolo, professor of mechanical engineering and materials science and of physics at Duke, believed that just as the biological scientists made stunning discoveries after the Human Genome Project began, the new national initiative would do the same in advancing the abilities of materials scientists to come up with novel materials and alloys with unique characteristics. Additionally, he felt, since he had already been laying the fundamental groundwork for several years, he had a head-start on the newcomers to this new field.

To take advantage of this potential, Duke Engineering created the Center for Materials Genomics, later renamed the Center for Autonomous Materials Design. It was founded by Curtarolo with associate director Omar Knio, professor of mechanical engineering and materials science and director of uncertainty and risk assessment. 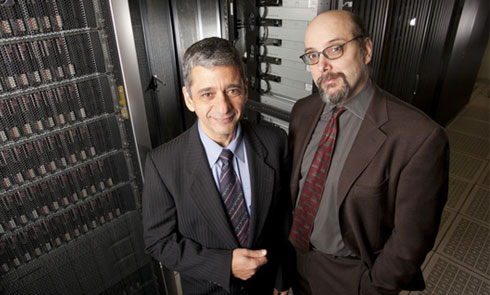 “Modern technology is demanding new materials at an increasing pace,” Knio said. “In order to tackle some of the most pressing energy and defense problems, we must develop new materials. And these new materials must be smarter, cheaper, environmentally friendly and compatible with existing manufacturing processes.

“The task might seem at first glance to be insurmountable,” Knio said, “but a new highway has opened in the materials discovery world—the high throughput computational method, which not only allows computers to churn through all the characteristics desired in a new material but to produce the recipe quickly.”

The Duke center recently received more than $300,000 from the Department of Defense to obtain the necessary computing power to beef up current capabilities and $1 million from the Department of Energy to develop materials discovery algorithms—with more federal grants, as well as collaborators, in the offing.

Since the field is so new, the Duke researchers believe their head start will enable them to recruit more top materials scientists and attract the most promising graduate students and post-doctoral fellows.

“This is an adventurous journey where players will race through a highway without speed limits,” Curtarolo said.

The key, as Curtarolo said, is to achieve the massive computing power necessary to “create a large database containing the thermodynamic and electrical properties of existing and hypothetical materials and then intelligently interrogate the database searching for materials with the desired properties.

”In Curtarolo’s vision, open science and codes, data-sharing and worldwide repositories are the fuels for accelerating materials discovery. In writing about his recent review article on the topic, the editors of Nature wrote in an editorial that “Stefano Curtarolo and colleagues argue...finding appropriate and computationally fast descriptors will be a key step in the quest for accelerating the discovery of novel materials.”

In the simplest of terms, Curtarolo and his colleagues have created a Joy of Cooking for scientists wishing to develop materials for ultra-specialized uses, such as highly efficient electrical components to cool down electronics like laptops (replacing the bulkier fans now in use).

However, in the past, finding the right combination of elements for a particular function was a trial-and-error process without a solid theoretical underpinning, which could make the process slow and expensive. And even at the end of that process, the material still may not have been the best for the job. The project developed by the Duke engineers provides detailed “recipes” for creating the most efficient combinations for a specific purpose, much like hardware stores mix many fundamental paint colors to achieve a customized result. The repository, organized as a multi-university consortium, is free and open to all at www.aflowlib.org.

“We have calculated the thermoelectric properties of more than 2,500 compounds and have calculated all their energy potentials in order to come up with the best candidates for combining them in the most efficient ways,” Curtarolo said. “Scientists will now have a more rational basis when they decide which elements to combine for their thermoelectric devices.

“While extremely helpful and important, a database is intrinsically a sterile repository of information, without a soul and without life. We need to find the materials’ ‘genes,’” said Curtarolo. “We have developed what we call the ‘topological descriptor,’ that when applied to the database can provide the directions for producing materials with desired properties.”

While developing the key to this database, the team also discovered a new class of systems that could not have been anticipated without such a “genetic” approach. The new descriptor developed by the Duke team basically can determine the status of any specific combination of elements under investigation. On one end of the spectrum, Curtarolo explained, is “fragile."

“We can rule those combinations out because, what good is a new type of crystal if it would be too difficult to grow, or if grown, would not likely survive?” Curtarolo said. A second group of combinations would be a middle group termed “feasible.”

But what excites Curtarolo most are those combinations found to be “robust.” These crystals are stable and can be easily and efficiently produced. Just as importantly, these crystals can be tailored to provide unique electrical properties.

In the past, scientists have not had a rational basis for combining different elements to produce these energy-producing materials. Different material combinations may be a more efficient method of turning these temperature differences into power, according to Shidong Wang, a postdoctoral fellow in Curtarolo’s laboratory.

Thermoelectric materials can be created by combining powdered forms of different elements under high temperatures. Not only does the new system provide the recipes, but it does so for the extremely small versions of the particular elements, known as nanoparticles. Because of their minuscule size and higher surface areas, nanoparticles have properties, unlike their bulk counterparts.

“Having this repository could change the way we produce thermoelectric materials,” Wang said. “With the current trial-and-error method, we may not be obtaining the most efficient combinations of materials. Now we have a theoretical background, or a set of rules, for many of the combinations we currently have. The approach can be used to tackle many other clean-energy related problems.”

Curtarolo pointed out that as steel made possible the steam engine and industrial revolution, and silicon made the information age a reality, developing new materials are crucial to revolutionizing future advances.

As President Obama said in his speech, “It’s worth remembering, there was a time when steel was about as advanced as manufacturing got. But when Andrew Carnegie discovered new ways to mass-produce steel cheaply, everything changed. Just 20 years after founding his company, not only was it the largest, most profitable in the world, America had become the number-one steelmaker in the world.”

The Duke engineers believe they can lead the same type of revolution in materials science—though a lot faster.