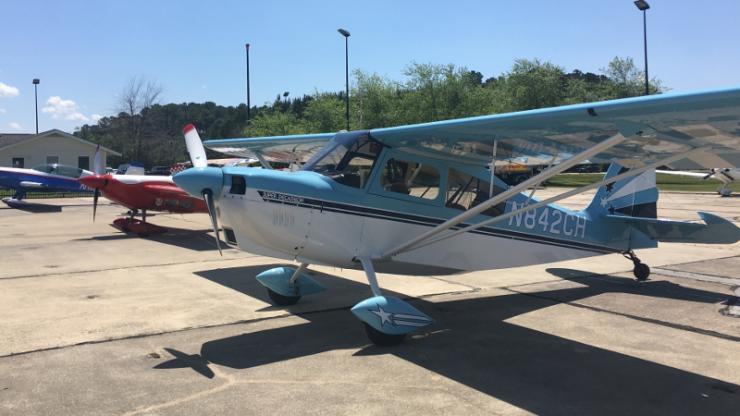 When Kenneth Hall first saw a photo of his future aerobatics plane, his heart sank. At Hall’s request, a local friend and aircraft broker had quickly located the perfect plane to learn the craft with—a nearby American Champion Super Decathlon in excellent condition for a fair price. There was just one problem.

It was painted Carolina blue.

For most people, this wouldn’t be an issue, but Hall is a professor at Duke University, and the color is the exact shade made famous by Duke’s crosstown rivals at the University of North Carolina—Chapel Hill. The airplane’s tail number even ends with “CH.”

“I bought it anyway,” said Hall, who is now the Julian Francis Abele Professor of Mechanical Engineering and Materials Science at Duke. “But it took me more than a year to get used to the color.”

Hall began learning how to fly in the summer of 1990, the same year he joined Duke’s faculty. Over the years, he earned his single-engine airplane private pilot’s certificate, followed by his instrument rating and then a multi-engine commercial certificate. By 1998, he owned a Cessna 172 Skyhawk—the most numerously produced aircraft ever—and was regularly flying through the skies of North Carolina. 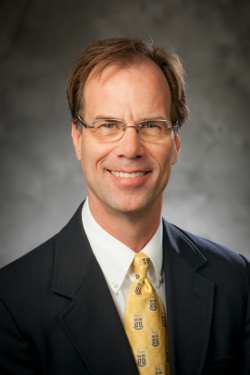 For Hall, flying had been a dream since building model airplanes as a kid. It’s a love that lead him to his work in aerodynamics.  His research includes modeling the behavior of unsteady air flows in the fan, compressor and turbine stages of gas turbine engines. These unsteady aerodynamic forces can cause unwanted and damaging blade vibrations. Hall’s work, for which he won the 2018 AIAA Aerodynamics Award, seeks to uncover the underlying physical mechanisms at play, and to develop computational tools to aid in the design of more efficient and powerful gas turbine engines.

Hall became interested in a different sort of flying while teaching undergraduate classes on aircraft performance and design around 2011. The project he put in front of his juniors and seniors was to design and build a lightweight single-seat cross-country airplane that could set the unrefueled distance record for that class of aircraft.

While the airplane was never built, Hall took notice of an interesting feature of the class’s design—it looked like a Formula 1 racer flown at the Reno Championship Air Races, one of the few remaining venues for air racing, the “world’s fastest motorsport.” That realization made Hall want to compete in the races. But to qualify, he’d have to learn how to fly aerobatics, which is why he was looking to purchase that Carolina blue airplane.

Lay people often think of Aerobatics as stunt flying or trick flying, although strict safety regulations make actual aerobatic competitions tamer than those descriptions suggest. Pilots are given a sequence of maneuvers to fly taken from the Aresti Catalogue, which contains every maneuver permitted in competition, such as rolls, spins and hammerheads. As Hall began to learn the new form of flying, he quickly discovered he had more to worry about than the color of his airplane.

“A typical maneuver in my plane puts four Gs on the pilot, and some can get up to five,” said Hall. “I had bouts of motion sickness for the first few months, but I eventually got used to it.”

As Hall became better at aerobatics, his original goal of racing in Nevada faded. Instead, he continued practicing aerobatics and has recently started to fly in local aerobatic contests in the lower ranks. Much like figure skating, judges on the ground watch as pilots guide their airplanes through the prescribed flight sequence while judging the technical merits of each figure, such the roundness of a looping figure or the symmetry of maneuvers performed along a vertical line.

Completing these types of maneuvers is all about knowing where to look. When pilots can no longer see the horizon out in front of them, they look out to the side using sighting devices mounted on their wings to keep track of their orientation. Even then, some aspects of aerobatics just take practice.

“You can’t see a loop from inside the airplane, so getting your airplane to make a perfectly round loop is more about knowing what it feels like to fly it correctly,” said Hall. “So practicing requires help from people on the ground to let you know how well you’re doing.”

"Aerobatics has made me a better and safer pilot. The importance of understanding how the airplane behaves at the edges of its performance envelope—and how to recover if you get outside the envelope—can’t be underestimated."

As with any sport, there are different levels of competition. For aerobatics, these include—from least competitive to most—primary, sportsman, intermediate, advanced, and unlimited. The main difference is the difficulty level and the number of different sequences a pilot flies.

In primary, the flight sequence is known beforehand and can be practiced repeatedly. Sportsman adds an optional free sequence, designed by the pilot. The three higher levels have both the known and free sequences, plus an unknown sequence the pilots only see for the first time the night before they fly it in competition.

Hall currently competes in the sportsman category and has plans to fly in two or three events in North Carolina and Virginia this year. While he may one day move up to the intermediate class, moving higher requires both higher performance airplanes and pulling more Gs, which is physically demanding.

As it is, aerobatics is already an interesting and challenging hobby for Hall.

“Flying a maneuver well requires skill,” said Hall. “Aerobatics has made me a better and safer pilot. The importance of understanding how the airplane behaves at the edges of its performance envelope—and how to recover if you get outside the envelope—can’t be underestimated.”