Working with a synthetic gene circuit designed to coax bacteria to grow in a predictable ring pattern, Duke University scientists have revealed an underappreciated contributor to natural pattern formation: time.

In a series of experiments published Oct. 8, 2013, in the journal Molecular Systems Biology, associate professor of biomedical engineering Lingchong You and his colleagues show that their engineered gene circuit functions as a timing mechanism, triggering a predictable ring growth pattern that adjusts to the size of its environment. 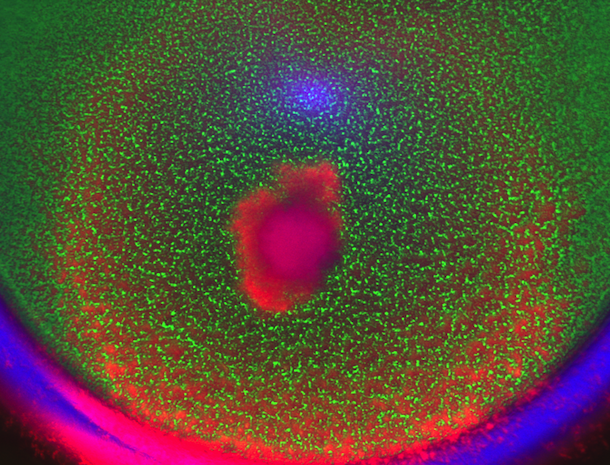 The unexpected result provides a potential explanation for how organs such as the heart and lungs know when to stop growing and runs counter to established theories, one of which dates back to computer pioneer Alan Turing. The finding also lays a foundation for engineering patterned bacteria as a biological scaffold for new materials such as metallic films, which have potential applications in the energy field.

“Everywhere you look in nature there are patterns, many of them very beautiful and even inspirational,” said You. “Our work adds another dimension to the general principles of pattern formation.”

Turing's ideas guided theories of pattern formation in biology for decades. He imagined biological patterns arose from the interaction of chemicals he termed “morphogens” that initiated and directed patterns by triggering on- or off-switches, depending on their concentration in a particular location. In a theoretical treatise published in 1952, Turing used math to show how these morphogens could move in space, revealing patterns that mimic those seen in animal skins and leaf shapes.

But like persistent myths, theories can also become entrenched. You and his colleagues became puzzled when a synthetic gene circuit they built to test Turing’s model didn’t create the growth pattern they were expecting.

Using molecular biology techniques, he and his colleagues had programmed the common laboratory bacterium E. coli to produce two molecules. One served as the “on” switch that spreads throughout the growing colony. The other served as the “off” switch that would be triggered by an increasing concentration of the “on” signal.

The researchers also engineered the bacteria to produce fluorescent colors so they could watch patterns form. But as the colonies grew, the emerging patterns didn’t behave as predicted. They were much smaller than the research team expected based on how fast the “on” signal should diffuse.

Instead, the researchers reasoned that the “on” signal served as a timing cue. The research team then created a mathematical model of the timing mechanism and predicted how the cells would respond to changes in the size of their growth chamber. 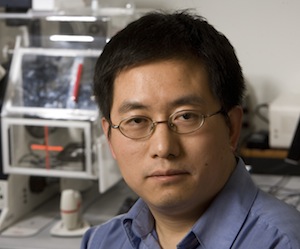 “By serving as a timing cue, the morphogen ‘on’ signal enables the system to sense and respond to the size of the environment,” said You. “The larger the area, the longer it takes for the morphogen to accumulate to a high enough concentration to trigger pattern formation. As such, a larger area will lead to a larger ring pattern.”

Follow-up experiments confirmed the model, and provided a simple example of how growing organs may be able to sense the size of their environment -- and when it’s time to stop growing -- potentially solving a persistent mystery in developmental biology.

You and his colleagues plan to use the artificial gene circuit to create more complex biological patterns, both to further explore general principles of pattern formation and to serve as scaffolds for making new materials, such as thin metal films for energy applications.

Video: Growth of a bacterial colony (green) over about 60 hours. The blue "on" signal spreads outward from the center; red represents the "off" signal triggered over time. Credit: Stephen Payne, Pratt School of Engineering, Duke.