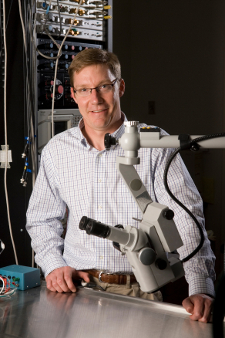 The Pratt School Professorship is designated for an individual who is addressing one of the National Academy of Engineering’s Grand Challenges for Engineering, and Grill’s research into understanding and controlling neural function falls within the Grand Challenge of “Reverse-engineering the Brain.”

“Dr. Grill is one of our most outstanding faculty members,” said George Truskey, interim dean of the Pratt School of Engineering. “I can’t think of anyone more deserving of this distinguished professorship.”

“Dr. Grill’s scholarly and teaching activities exemplify those of individuals that we seek to recognize and highlight on the faculty at a university like Duke,” added Craig Henriquez, the James L. and Elizabeth M. Vincent Professor of Biomedical Engineering and Director of Duke’s Center for Neuroengineering. “He is an accomplished leader in his field and is enthusiastically engaged at every level of the undergraduate, graduate and post-graduate education.”

Grill has pursued quantitative studies to understand the neural mechanisms underlying a spectrum of diseases from bladder dysfunction to Parkinson’s disease to chronic pain, and then used this understanding to develop innovative therapeutic approaches.

For example, Grill has developed prostheses to restore continence in persons with spinal cord injury that impair bladder function. He has also developed novel patterns of deep brain stimulation for treating Parkinson’s disease and other brain diseases that affect motor control, potentially allowing for smaller and longer lasting battery-powered implants.

Grill has received numerous awards including the Duke University Scholar/Teacher of the Year Award in 2014 and the Outstanding Postdoc Mentor Award from the Graduate School in 2013. In 2009, he received a Bass Chair in recognition of the high quality of his teaching and research. He is on the editorial board of several journals in his field and has chaired the Neurotechnology Study Section at the National Institutes of Health.

In a clear recognition of his contributions to neuroengineering and the potential to improve further patient outcomes, Grill recently received the prestigious Javits Neuroscience Investigator Award from the National Institute of Neurological Disorders and Stroke. He is a fellow of the Biomedical Engineering Society and the American Institute of Biological and Medical Engineering, and his work has led to the founding of two companies: NDI Medical and Deep Brain Innovations.

“Quite simply, I think Warren is one of the leading biomedical engineers of his era, and his work shows great promise for continuing to develop in this path,” said William “Zev” Rymer, director of the Sensory Motor Performance Program and director of Research Planning at the Rehabilitation Institute of Chicago, and professor of physical medicine & rehabilitation, physiology, and biomedical engineering at Northwestern University. “I expect he will progressively become one of the leaders in the field of biomedical engineering at large, and specifically in areas relating to electrical stimulation of neural tissues.”